The history of the historical markers

We decided to take a drive down the Beaverkill to check out the fishing conditions but didn't see a single angler in the stream, which was high and discolored. However, upon reaching Junction Pool in …

The history of the historical markers 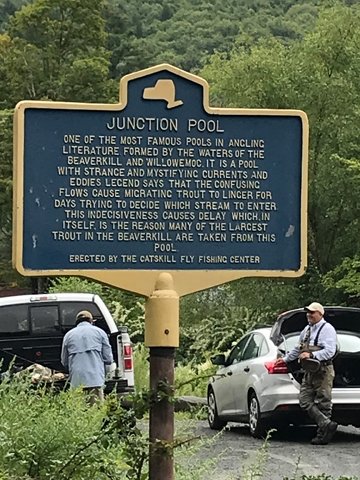 Anglers suiting up along the banks of the Beaverkill at Junction Pool observing the historical marker placed there. It has become a tradition for some trout fishers to travel from far and near to see the markers and fish each of the famous named pools, cementing forever in their minds the importance of the Beaverkill, and passing along these memories to generations to come.
Photo by Judy Van Put
Posted Monday, September 7, 2020 12:00 am
Judy Van Put - Columnist

We decided to take a drive down the Beaverkill to check out the fishing conditions but didn't see a single angler in the stream, which was high and discolored. However, upon reaching Junction Pool in Roscoe, we noticed three anglers all suited up, observing the blue-and-yellow historical marker placed near the parking area. It seemed like a good opportunity to provide a little history of those markers, which stand prominently along the banks of many of the named pools on the Beaverkill and Willowemoc.

Back in the 1990s, Jane Timken, a fly-fisher, publisher and member of the Theodore Gordon Flyfishers (TGF) was looking for a conservation project that involved the Beaverkill watershed. She contacted Ed Van Put, who came up with the idea of preserving and commemorating the famous pools on the river by erecting historical markers at nine of the most important pools along the Beaverkill and Willowemoc. The tradition of naming the pools was started by raftsmen, who floated rafts of timber down the Beaverkill and Delaware to be sold in Philadelhphia; these names, many of which were colorful, such as Pull Hair and Hell Hole, have been handed down verbally from one generation of raftsmen to the next, for a period of more than one hundred years.

It was decided to place the markers at Hazel Bridge, site of the first public fishing easement along the Willowemoc in 1937; at the Beaverkill Covered Bridge, a favorite pool of Theodore Gordon (1854 - 1915) Fly fisher, fly-tier and creator of the Quill Gordon fly; Ferdon's Eddy, named after John S. Ferdon (1822 - 1908) early Beaverkill settler and raftsman; Wagon Tracks, named for the wagon wheel marks left in the stream bed by farm machinery crossing to mow fields on the opposite bank; Hendrickson's, favorite pool of Albert E. Hendrickson, after whom the popular Hendrickson dry fly, first tied by Roy Steenrod in 1916, was named; Painter's Bend - named for the mountain lions or panthers that used to cross by leaping from boulder to boulder in pioneer days - old-time raftsmen “twang” corrupted “panther” into “painter”; Barnhart's, named for the Barnhart family who owned the adjoining lands and conveyed in 1939 a 1-mile public fishing rights easement; Horse Brook Run, named after nearby Horse Brook; and Cairns Pool, named after the Cairns family, owners of adjoining lands, early Beaverkill settlers, farmers and raftsmen.

Letters seeking approval and permits to install the markers were sent to state and county agencies, including both Sullivan and Delaware, and DEC Bureau of Fisheries Managers in Regions 3 and 4. Ed contacted the Walton Foundry, who cast New York State Historical Markers, now manufactured by Catskill Castings in Bloomville, New York, and learned how the markers were created. He was eager to see the project, funded by Jane Timken and credited to Theodore Gordon Flyfishers, come to fruition; and wasted no time in seeing it through. He composed the text for each marker, brought the order to the foundry, picked up the markers when each was completed. He then chose the sites, and prepared the ground - dug the holes, mixed the cement and erected the markers. Of the original markers, the last to be placed was at the Beaverkill Covered Bridge. Theodore Gordon Flyfishers sent out postcards and invitations advertising a celebration to dedicate the markers that was held at the Beaverkill Covered Bridge on May 29, 1998. More than 100 well-wishers turned out for the event, which included refreshments and, of course, fishing.

Through the years a few more such markers have appeared along the river; including one at Junction Pool, one of the most famous pools in angling literature formed by the junction of the waters of the Beaverkill and Willowemoc, erected in 1998 by the Catskill Fly Fishing Center; and in 2005 at Cemetery Pool, a favorite home of big rainbows and browns, a pool large enough for several friends to share good fishing and the camaraderie that is a part of fly-fishing; erected by Friends of Jeff Trainor.

It has become a tradition for some trout fishers to travel from far and near to see the historical markers and fish each of the famous named pools, cementing forever in their minds the importance of the Beaverkill and Willowemoc, and passing along these memories to generations to come.