The inestimable value of losing

LAKE HUNTINGTON – “Everyone loses. It’s how you come back from those losses that define you.” That unattributed sports maxim offers a pivotal lesson for the Sullivan West …

The inestimable value of losing 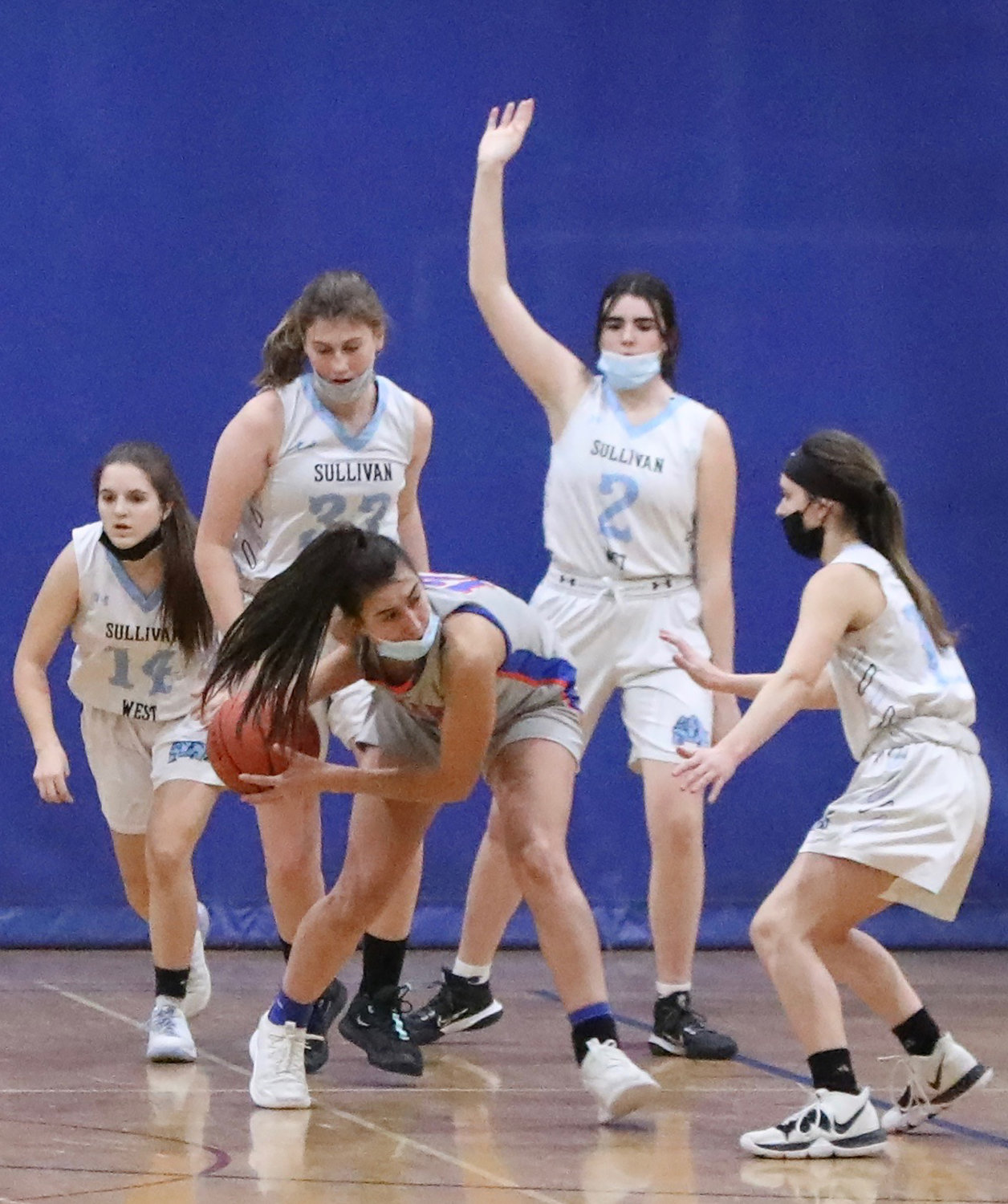 Sullivan West’s patented aggressive defense hems in Seward star Shannon Sgombick as Grace Boyd, Brielle Arnott, Taylor Wall and Elaine Herbert fence her in. The idea was to deny her penetration and it mostly worked but she came up huge in the OT to help Seward bypass the Lady Westies.
Richard A. Ross | Democrat 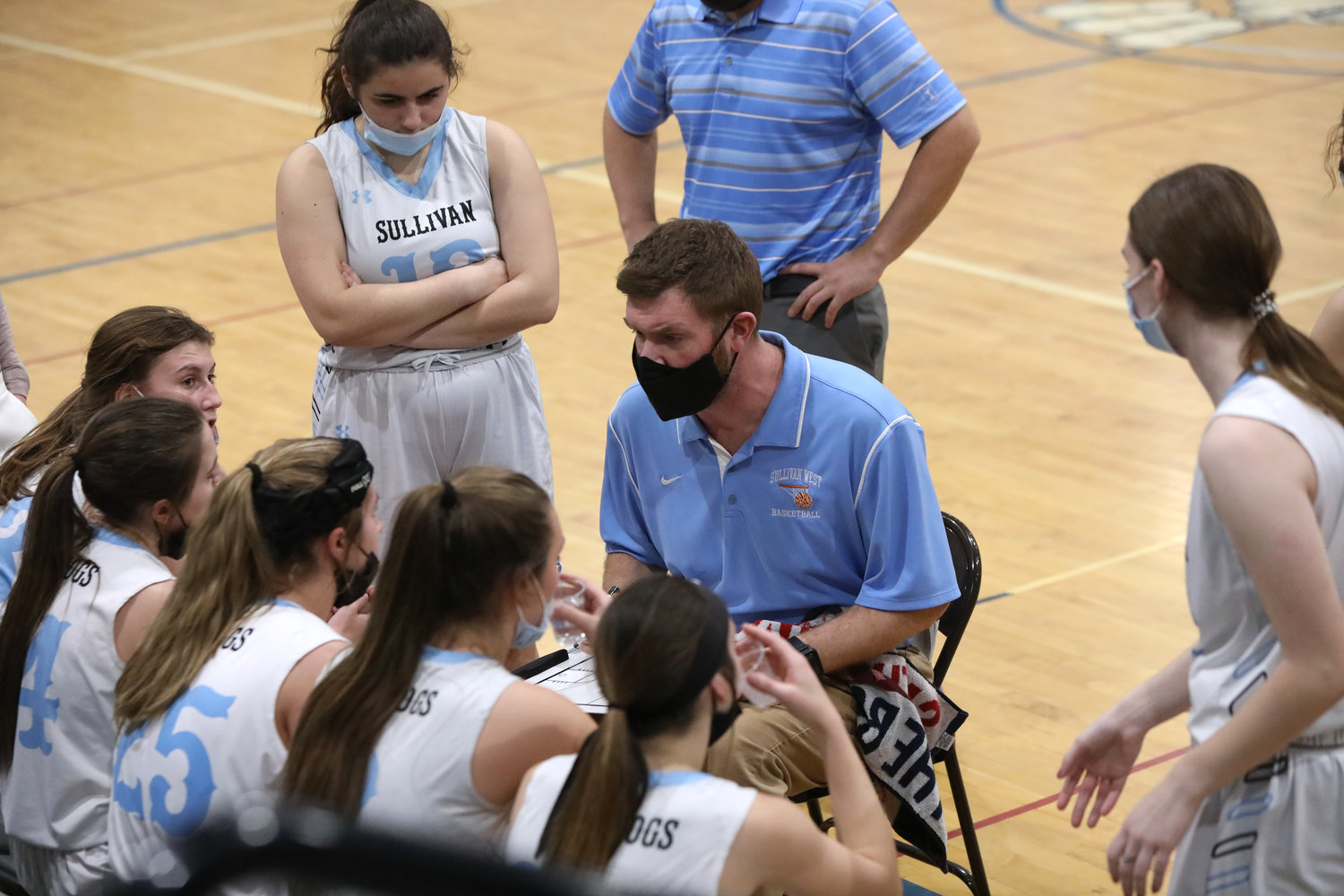 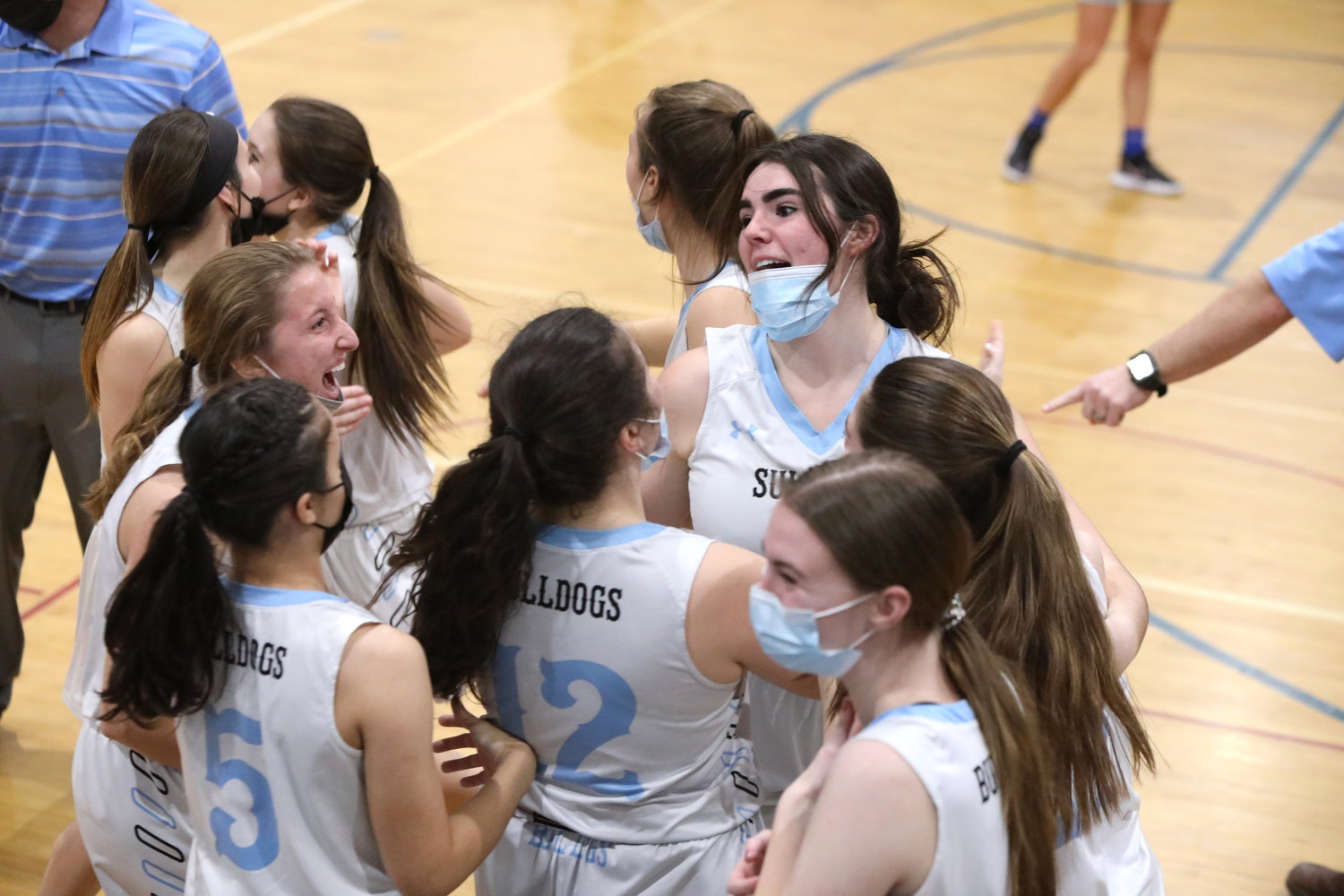 Taylor Wall receives unbridled adulation after tying the game at the buzzer in regulation to propel the game into OT. The joy dissipated as Seward took command of the extra segment.
Richard A. Ross | Democrat
Previous Next
Posted Tuesday, February 8, 2022 6:20 am
Richard A. Ross

LAKE HUNTINGTON – “Everyone loses. It’s how you come back from those losses that define you.” That unattributed sports maxim offers a pivotal lesson for the Sullivan West Lady Bulldogs who by dint of a Seward flagrant mistake in the waning seconds of regulation, marshalled a timely bucket from senior Taylor Wall to propel the game into an unlikely overtime. Unfortunately for the momentarily ecstatic Lady Westies, that extra four minutes turned into their commission of five turnovers, coupled with 14-4 Seward scoring, mostly comprised of free throws, that ended in a 49-39 league loss.

The defeat nixed a chance to complete a historically unprecedented sweep of Sullivan West’s arch-rival. The antithetical body language and facial expressions of their pre-game confidence and post-game tearful despondency reflected the trip from hope to dismay. Now it’s time to use the loss as a launching pad to playing tougher, smarter and with more precision. Losing hurts to be sure, but losses can be far more instructive than wins. With a key chance to turn the tables on Chester tonight, viewed by many as one of the prematurely anointed favorites along with Millbrook to get to the finals, Sullivan West has its first chance at redemption as well as improving its seed in the upcoming sectionals. Seward plays Chester again as well, and a win by either could change the array.

Sullivan West and Seward each pulled off wins on the opposing team’s court, with the Lady Bulldogs winning the first down in Florida. This rematch proved to be even more intense. Though the Lady Spartans held a three-point lead at the end of the first, the teams were tied at 17, 23, 35 at the end of the subsequent quarters leaving the OT to decide the result. The tale, while captivating throughout the first three quarters, became riveting in the fourth as each team sensed the building pressure.

For Seward coach Joe DiMattina having his team coming in at 10-4 but only 1-2 in the league, this win would be crucial. The same was true for Sullivan West wherein a victory would improve their 8-2 (1-1) league status. Nearly four minutes had gone by into the fourth quarter before SW’s Riley Ernst tied the game at 25 and then nearly two minutes more before Taylor Hall gave the Westies a 27-25 edge. Thereupon, Seward standout Shannon Sgombick tied it again. Sullivan West outrebounded Seward all night but rarely finished well, but Ernst capitalized on two SW misses for a 29-27 lead. Sullivan West had packed in its defense to hinder Sgombick’s penetration, and it mostly worked, but a three by Seward’s Kassidy DeGroat made it 30-29 with 1:20 to go. Then Wall hit two free throws to make it 31-30 Sullivan West. Seward responded with a trey from Kayla Valenti for the 33-31 edge with just 43 seconds remaining. When Sgombick hit one of two from the stripe for the 34-31 lead with 20.7 to go, Wall came right back to close the lead to one. After Sgombick canned a free throw to make it 35-33. She got the rebound on the miss, but instead of just pulling the ball out with a few seconds remaining, she oddly put it back up and missed. SW got the rebound with 4.3 seconds. Coach Pat Donovan called time out and Wall got the game-tyer at the buzzer. SW players went ballistic with Wall at the center of their adulation.

Imagine the letdown in the OT as Seward led after a Sgombick lay-up and held that lead right to the end. They hit ten free throws, seven of which came from Sgombick who redeemed herself from that miscue. In all, the Westies sent the Lady Spartans to the line for 14 attempts. Sgombick scored nine of her game-high 25 points in the OT including seven from the stripe. The Lady Dawgs could only manage two free throws and a bucket to counter, thus the ten-point disparity in a game that was razor-thin close all the way until the extra frame.

Donovan gave the post-mortem, “We turned the ball over too many times and didn’t finish around the rim. These are little things we harp on in practice. Now it’s my job to figure it out. The girls just have to play accordingly.”

Bottom line: learn from mistakes. Try not to make them again. Put the loss in the rearview mirror and move on. The Chester game tonight will be huge as the Sectional array is yet to be inked.