The Light Cahill, and Thanks to William Chandler

We are still dealing with in the Dog Days of Summer. Last week, although temperatures were warm, river levels were above the average flow all week; this past week through Sunday, August 2, the …

The Light Cahill, and Thanks to William Chandler 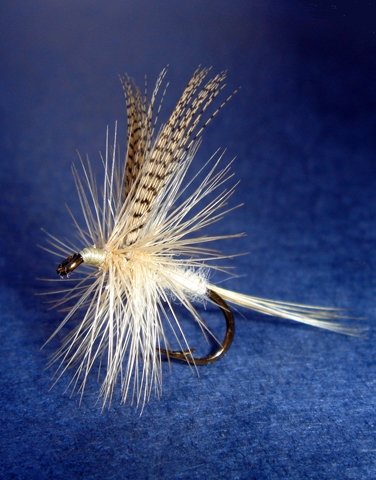 We are still dealing with in the Dog Days of Summer. Last week, although temperatures were warm, river levels were above the average flow all week; this past week through Sunday, August 2, the Beaverkill was not only warm (water temps ranging in the 70s up to 80 degrees Fahrenheit) but had dropped to a level below average. On Sunday afternoon the Beaverkill at Cooks Falls was flowing at 108 cubic feet per second, as compared to the average flow on this date of 140 cfs over 107 years of record-keeping. Interestingly, the highest flow recorded on August 2 was 2330 cubic feet per second in 2009; the lowest flow was way back in 1936, when just 38 cubic feet of water trickled past the gauging station. Hopefully we'll receive some of the rain that is predicted for this week to raise water levels and lower temperatures a bit and provide conditions more conducive to better fishing.

A favorite light-colored dry fly that is popular from June through September and is often used with success in mid-summer is the Light Cahill.

The Light Cahill was developed by William Chandler, a Catskill Fly Fishing Center Hall of Fame honoree, who was greatly admired by sportsmen and conservationists in Sullivan County. The fly is tied in the typical Catskill style, using drake mandarin or wood duck flank feathers for wings; a trim body of light cream-colored fur from the belly of a red fox; and light ginger cock's hackle for the tail and hackle. It works well in the evening when your fly is more difficult to see, which is often the very best time for fly-fishing in summer - just at dark when most anglers leave the stream!

William Chandler, 1883 - 1974, was raised on a farm across the Hudson River in Rensselaer. He was an avid fly fisherman, and as a young man was able to find employment as a manager of a sporting goods store. He then moved to New York City and became a fishing tackle specialist for Abercrombie & Fitch. (Not the clothing outlet - the Abercrombie Company was originally founded in 1892 in Manhattan, by David T. Abercrombie, and was an outfitter for “the elite outdoorsman”. The company was incorporated in 1904 after Ezra Fitch joined and eventually owned the company. It was noted for its expensive fishing rods, fishing boats, shotguns and tents, before changing hands and in the 1980s shifting to focusing on apparel appealing to young adults.)

Chandler fished the trout streams of the Catskill Mountains and especially loved the Neversink, where he dreamed of moving with his wife, Martha. In the past, William Chandler had enjoyed a friendship with the legendary Theodore Gordon, with whom he fished and shared a love of dry fly fishing. He and Gordon both tied a Cahill fly; however, Chandler's Light Cahill pattern is the one that fly-fishing entomologists believe is the best imitation of the pale cream or yellow Stenonoma mayfly and is the fly that contemporary fly-fishers are most familiar with.

In 1916, William and Martha settled in the tiny hamlet of Bittersweet, which today lies under the waters of the Neversink Reservoir, upstream of the village of Neversink, where they purchased a 12-acre property on the west side of the river and opened a small fishing lodge known as Neversink Lodge. In addition to experimenting with and tying dry flies (at a time when dry-fly fishing was relatively unknown to most fly fishermen of the day,) William Chandler was very active in his community. He was elected first as town justice, then as Supervisor of the Town of Neversink. He began organizing sportsmen and was a member of the Neversink Rod and Gun Club, the Liberty Rod and Gun Club, and was one of the few members of the Anglers' Club of New York to come from Sullivan County. In the 1930s he worked tirelessly to lobby for a New York State public fishing rights program and even purchased a half mile of the Neversink for the purpose of keeping it open for public fishing.

Chandler was successful in uniting the sportsmen in the county, and in 1936 was elected the first president of the Sullivan County Federation of Sportsmen's Clubs. This champion of sportsmen continued to work tirelessly in the field of conservation, and his efforts eventually resulted in the establishment of the Catskill Mountain Hatchery in DeBruce, as well as the eventual development of the Public Fishing Rights program in the state of New York.

In 1937 he was elected to the NY State Legislature as a New York State Assemblyman, where he continued his efforts on behalf of the people of the state of New York. William Chandler was known to be generous and kind and was much-beloved by his friends and neighbors.

Anyone who enjoys fishing with the Light Cahill, or visits the Catskill Fish Hatchery in DeBruce, or enjoys fishing public waters in any of our Public Fishing Rights streams and rivers, should thank William Chandler.