FLORIDA - There are no words to communicate the abject despair of losing a game that was so close to being won. To have that loss represent the closing bell to a wonderful season only adds to the … 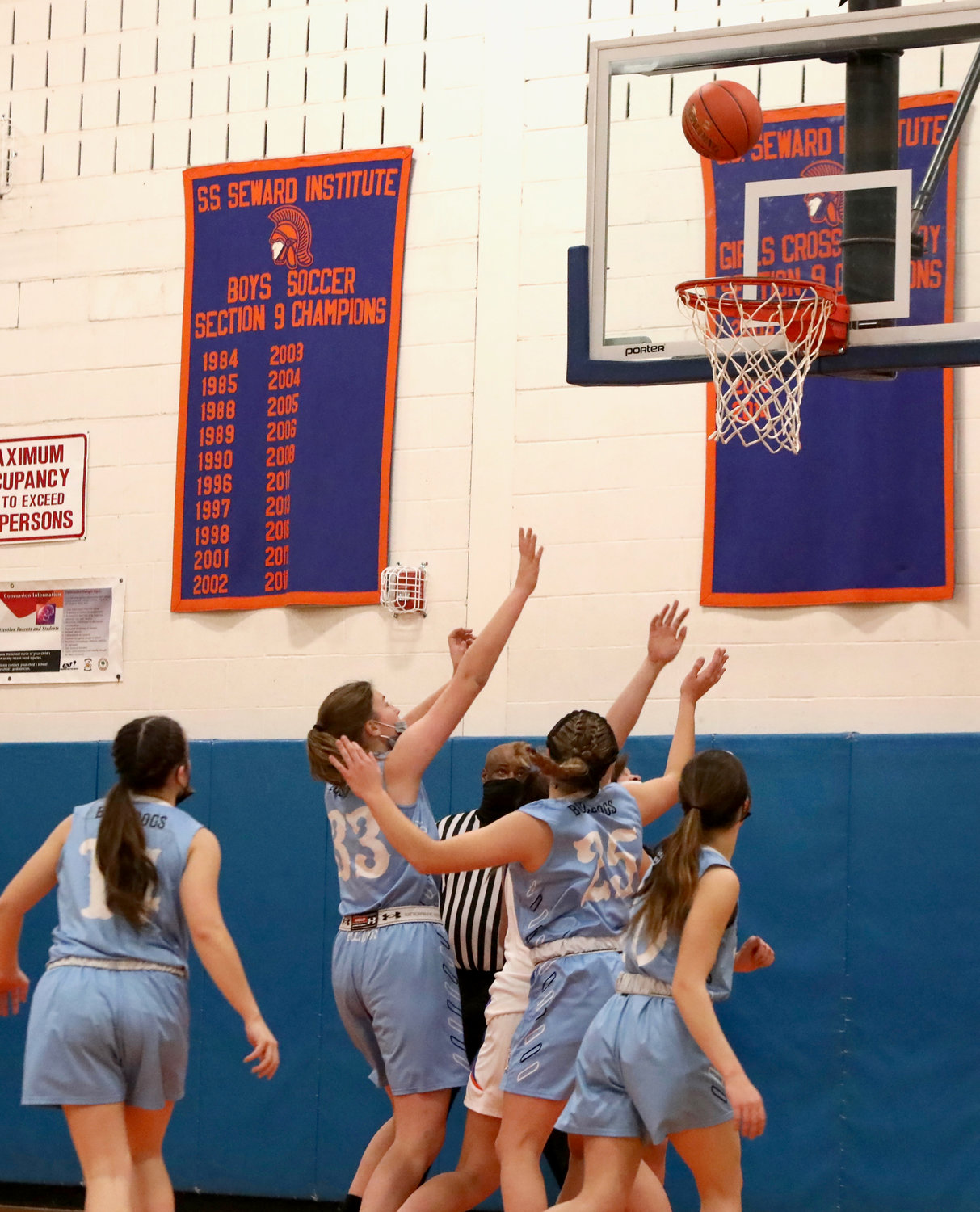 Sullivan West’s Elaine Herbert, last week’s Varsity 845 Player of the Week, became the Lady Bulldogs’ Player of the Game with 19 points, including eight in the uplifting SW near-win push in the waning seconds of the game.
Richard A. Ross | Democrat 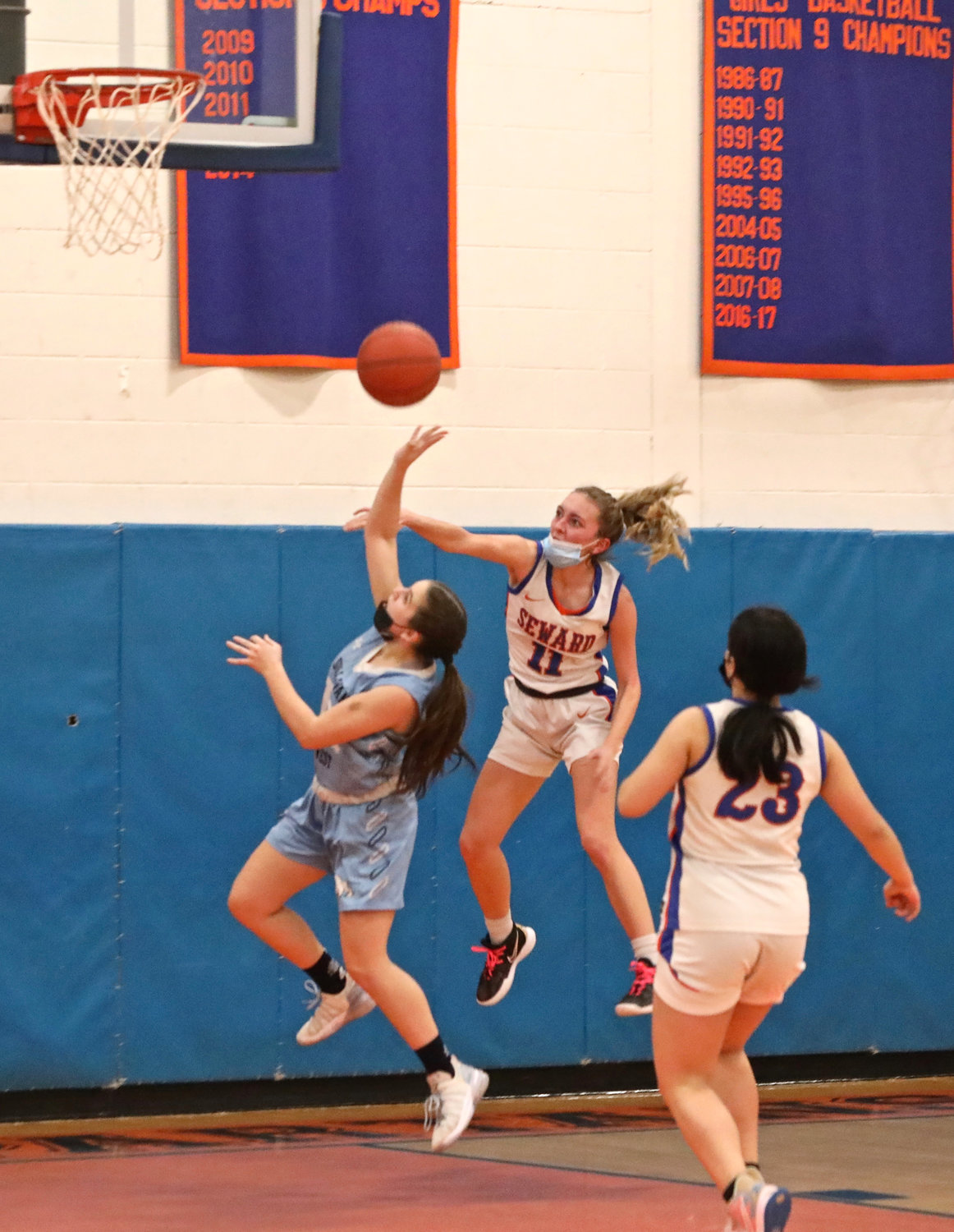 Sullivan West senior Brielle Arnott elevates for a shot and is fouled by Seward’s Kassidy DeGroat. She hit one of two from the stripe but had two big three-pointers in the game including one in the dramatic fourth quarter surge.
Richard A. Ross | Democrat 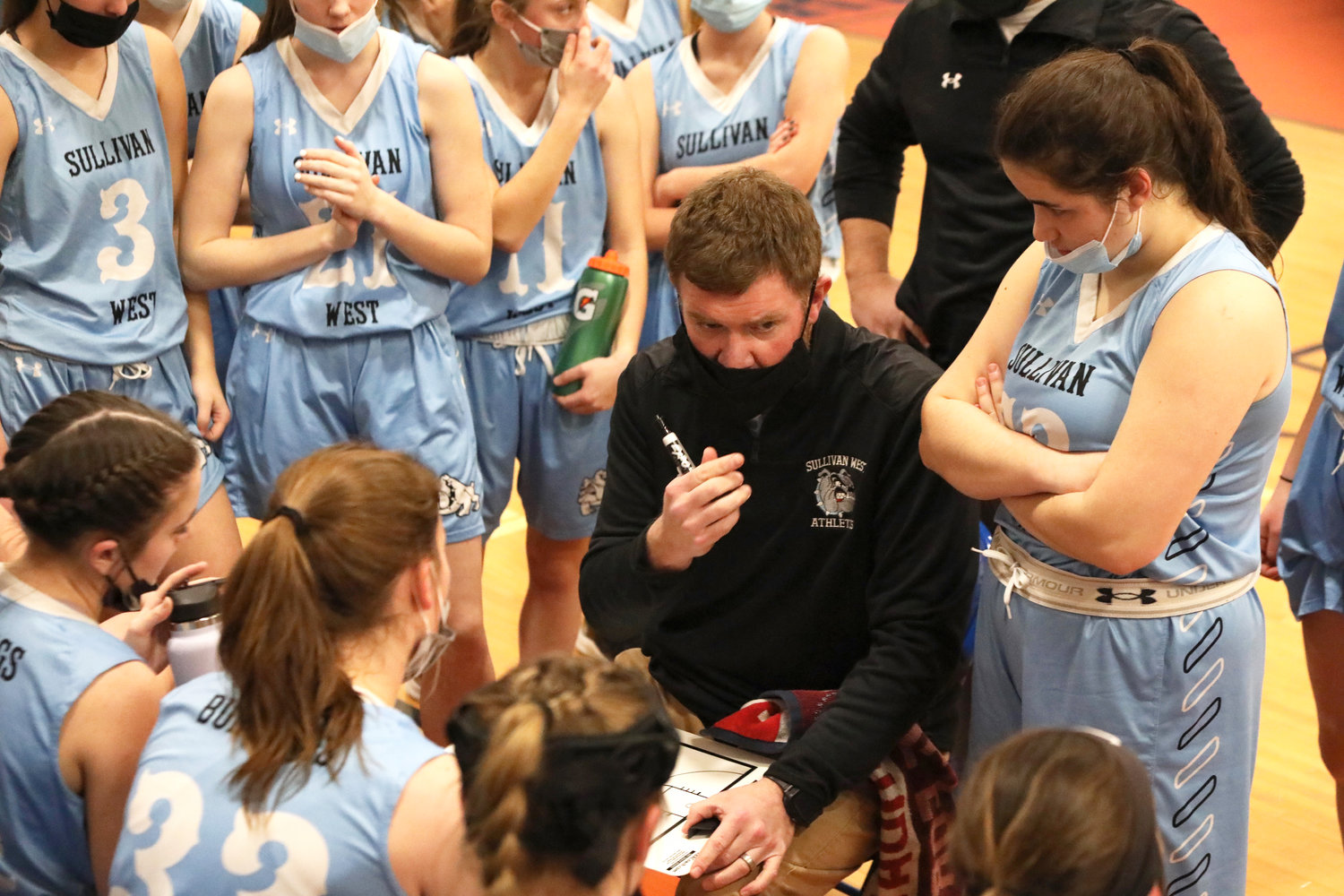 SW Coach Pat Donovan imparts strategy to his team during a time out. Donovan’s coaching this year was his best effort during his reign with arguably the best team under his watch to guide.
Richard A. Ross | Democrat
Previous Next
Posted Tuesday, March 1, 2022 6:40 am
Richard A. Ross

FLORIDA - There are no words to communicate the abject despair of losing a game that was so close to being won. To have that loss represent the closing bell to a wonderful season only adds to the sense of frustration and the reckoning with the finality of something so heavily invested in. Thus explains the tears and heartbreak of the Sullivan West Lady Bulldogs who ran off a 13-0 run to eradicate a prior 15-point Seward lead in the final four minutes of the fourth quarter to get within one point before Seward star Shannon Sgombick pulled the game out of the fire with her four-of-five free throws to ice the 41-37 win and send her team on to play Chester in the Class C semifinals.

The details of that waning minute point up the clear fact that Sullivan West was on the verge of perhaps their greatest win in Coach Pat Donovan’s reign. Seward had virtually collapsed starting with about four minutes left in the final stanza. Seeing his team making some bad shots, Lady Spartan coach Joe DiMattina implored his girls to slow the game down and work a weave at the top of the key to take minutes off the clock. But Sullivan West quickly scoped out the strategy and a combination of Seward turnovers and huge play by SW’s Elaine Herbert, who scored eight of her team-high 19 points in the fourth quarter, quickly whittled away Seward’s lead. Timely threes from Brielle Arnott and Herbert followed by a breakaway lay-up by Riley Ernst had the vocal SW fans on their feet. A put back of a miss and then a highlight reel backhanded pass from Grace Boyd on a ball that was heading out of bound to Herbert were more stunning components of the furious comeback bid. Trailing by only one point with 16.9 seconds to go and the ball in hand, the upset seemed imminent, but the ball went out of bounds and SW had to foul. Naturally, DiMattina made sure that it was Sgombick who had the ball in hand and the deft junior, no stranger to big moments hit both free throws to make it 40-37 with 1.5 seconds left. Fouled again she hit the first and deliberately missed the second to run time off the clock. At that point, it was a fait accompli, and the stark contrast of emotions often seen at the end of a sectional game, especially one this close, was readily apparent.

Seward knew it had dodged a bullet from a team that basically gave them fits all season. Thoughts ran back to their last encounter wherein Seward won at Sullivan West in an overtime reversal after Taylor Wall tied the game in regulation and sent the game into the extra four-minute duel. Unfortunately, SW suffered the turnover terrors and Seward went on to win. This game was the rubber match as the Lady Westies had beaten Seward in the Lady Spartans den earlier in the season. Suffice it to say that this game which seemed to be heading towards a relatively comfortable Seward victory took a sudden and dramatic turn as the fourth quarter proceeded with an ending fitting the intensity of Sectional basketball.

Seward jumped out to a 14-4 lead by the end of the first quarter and held a 27-15 lead at the half. The 33-19 lead they held at by the end of the third quarter masked a virtual shutdown of offense by both teams. Seward scored only six in that stanza and Sullivan West posted four. That began to change within two minutes of the fourth as the 13-0 run began. Sullivan West outscored Seward 18-8 in the final quarter but, as noted, just came up short with Sgombick’s free throws making the difference. She led all scorers with 20 and was eight-for 12 from the stripe on the night. She is only 15-points shy of becoming the next Seward 1000-point scorer. Early threes from Kassidy DeGroat and Kayla Valenti helped the early Seward surge. For Sullivan West, Elaine Herbert was critical in keeping her team in the game with her team-high 19 points. Sullivan West was only 4-for-11 from the line and shot a sub-par 13-for-53 from the floor (20.6%) coupled with three-for-14 from beyond the arc. Seward was not much better with 12-for-51 from the floor (23.5%) along with 4-for-27 from beyond the arc. Good defense by both teams caused a spate of turnovers.

Sullivan West Coach Pat Donovan summed up the game and the season thusly, “Elaine played great. She kept us in the game. We struggled around the rim missing some easy put backs and lay ups. But our defense came up big late. We were down 14 to start the fourth and came back to one, and we gave ourselves a chance to win.”

He continued, “That just shows what these kids are about. Playing defense has been what we are known for. We had a big three by Brielle and Elaine. An outstanding three-quarter court pass from Grace to Riley for a score. A steal by Grace and a layup. The girls stepped up late when they needed to. Unfortunately, we dug ourselves into a hole early, and it's tough to get out of it sometimes. This was a great season.

“This is a great group of girls that have been together now for three to four years with me,” Donovan further stated. “They are a very close-knit team. I know it may seem cliché, but we really did become a family this year. They welcomed Joe Meyer in with open arms. And helped play with my daughter Molly at practice. These girls are great! It's tough to let them go, but all good things end at some point. As for the future, that looks bright as well. We have some good players coming up and I'm excited to see what that brings.”

Sullivan West finished the season at 12-6; Seward goes on now with a record of 15-6 with daunting Chester waiting in the wings tonight.