Maurice Stokes was arguably the National Basketball Association’s first African American superstar. A rugged 6’7” 235-pounder out of St. Francis College, Stokes became one of the … 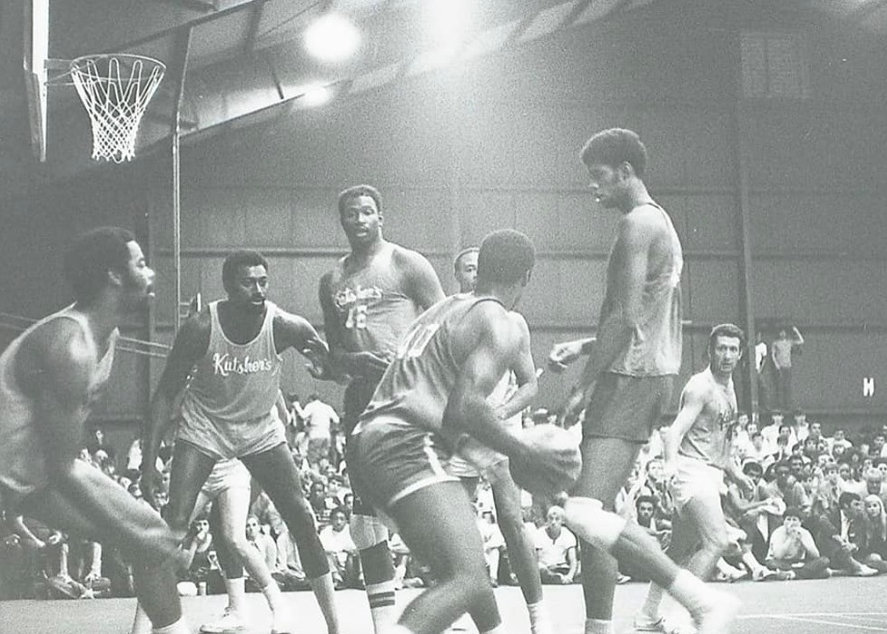 Walt Frazier, Wilt Chamberlain, Walt Bellamy and Kareen Abdul Jabbar were among the many NBA stars to play in the Maurice Stokes Game at Kutsher’s over the years.
Contributed Photo
Posted Friday, February 25, 2022 7:00 am
John Conway

Maurice Stokes was arguably the National Basketball Association’s first African American superstar. A rugged 6’7” 235-pounder out of St. Francis College, Stokes became one of the top players in the league in just three short years. His rebounding prowess especially, was virtually unprecedented in NBA annals, and he was viewed one of those rare players who could do it all—score, rebound and pass—and do it well.
But Maurice Stokes’ career-- and his life for that matter-- took an unexpected turn in the last regular season game of the 1957-58 season. During the contest against the Minneapolis Lakers, he fell hard to the floor, cracking his head. He was knocked unconscious, but revived with the help of smelling salts, he returned to the game and played the rest of the way, finishing with 24 points and 19 rebounds.
Three nights later, in a playoff game against the Detroit Pistons, Stokes didn’t seem himself. Though he logged 12 points and 15 rebounds, his play was described as “slow and heavy-legged.” Those were not terms often applied to Stokes’ game, and perhaps when he began throwing up afterward, alarm bells should have gone off. But they didn’t. Most everyone wrote the symptoms off as the flu or a hangover.
Even when Stokes complained that his entire body had begun to ache, and when he became too weak to walk, no one connected it to the fall from a few nights before. In fact, it wasn’t for some time that doctors decided that the big man suffered from post-traumatic encephalopathy, and by then Stokes had become totally paralyzed, capable only of blinking his eyes.
It soon became obvious that Maurice Stokes would be spending the rest of his life in the hospital. Even in the late 1950s, this was a considerable expense, and professional basketball players had not yet reached the millionaire class, nor were they—or most Americans—beneficiaries of medical insurance. Stokes had $9,000 in the bank, and following the injury he had been almost immediately cut from the Royals squad, so he would never earn another paycheck.
Enter Jack Twyman.
Twyman was the other forward in the Royals lineup, his game the antithesis of Stokes’. Skinny and exuberantly confident, he hardly ever launched a shot without having the ball, and he rarely gave a thought to passing or rebounding, let alone guarding his opponent. Still, he would become a prolific scorer, averaging more than 30 points a game in 1959-’60, including a 59-point performance against the Lakers.
Twyman had known Stokes since the two had played against each other as schoolboys in the Pittsburgh area. They had not been particularly close, even when they became teammates—fellow rookies-- on the Royals, but in the wake of the diagnosis that Stokes would need extensive long-term care, Twyman made a monumental decision. He became the stricken player’s legal guardian. Twyman was 24 years old.
And as virtually everyone pointed out, his decision was made even more amazing by the fact that Stokes was African American, and Twyman was not.
Race notwithstanding, it is likely that a stronger bond never existed. Twyman became more than a guardian. He visited Stokes virtually every day. He worked with him on a system of communication using only his eyelids, and eventually, as Stokes’ condition improved somewhat, Twyman helped him to type—sort of-- on a typewriter.
Stokes’ first typed message was simple, but painstaking to generate.
“Jack, how can I ever thank you for all you have done?”
Twyman was constantly raising money to pay the nearly $100,000 a year required to take care of Stokes, so when hotel owner Milton Kutsher offered to hold a game at his Monticello resort as a fundraiser, Twyman was all in.
Of course, the Sullivan County Catskills had once been synonymous with basketball. Time was that the very best players in all the world—the stars of the top American college teams—played their summer ball for the hotels. The point shaving scandals of the early 1950s had changed all that, but nearly a decade later many of the top pro players knew the area well.
That first game, pitting the Green against the Gold, raised $4,000 toward the care of Maurice Stokes. There would be more than forty others before the annual effort morphed into a golf tournament-- the fundraising lasting long after Maurice Stokes’ death at the age of 36 in 1970—the proceeds of the later efforts going to help other needy former players.
Jack Twyman died in 2012; he was 78. For all his accomplishments on the basketball court, his greatest legacy remains the role he played in one of the greatest friendships of all time, the unbreakable bond he shared with Maurice Stokes.