ynasty” gets thrown around in sports frequently. Sometimes a team just stands out with their continued success and they become the team to beat.

For the Sullivan County Democrat Two-Man … 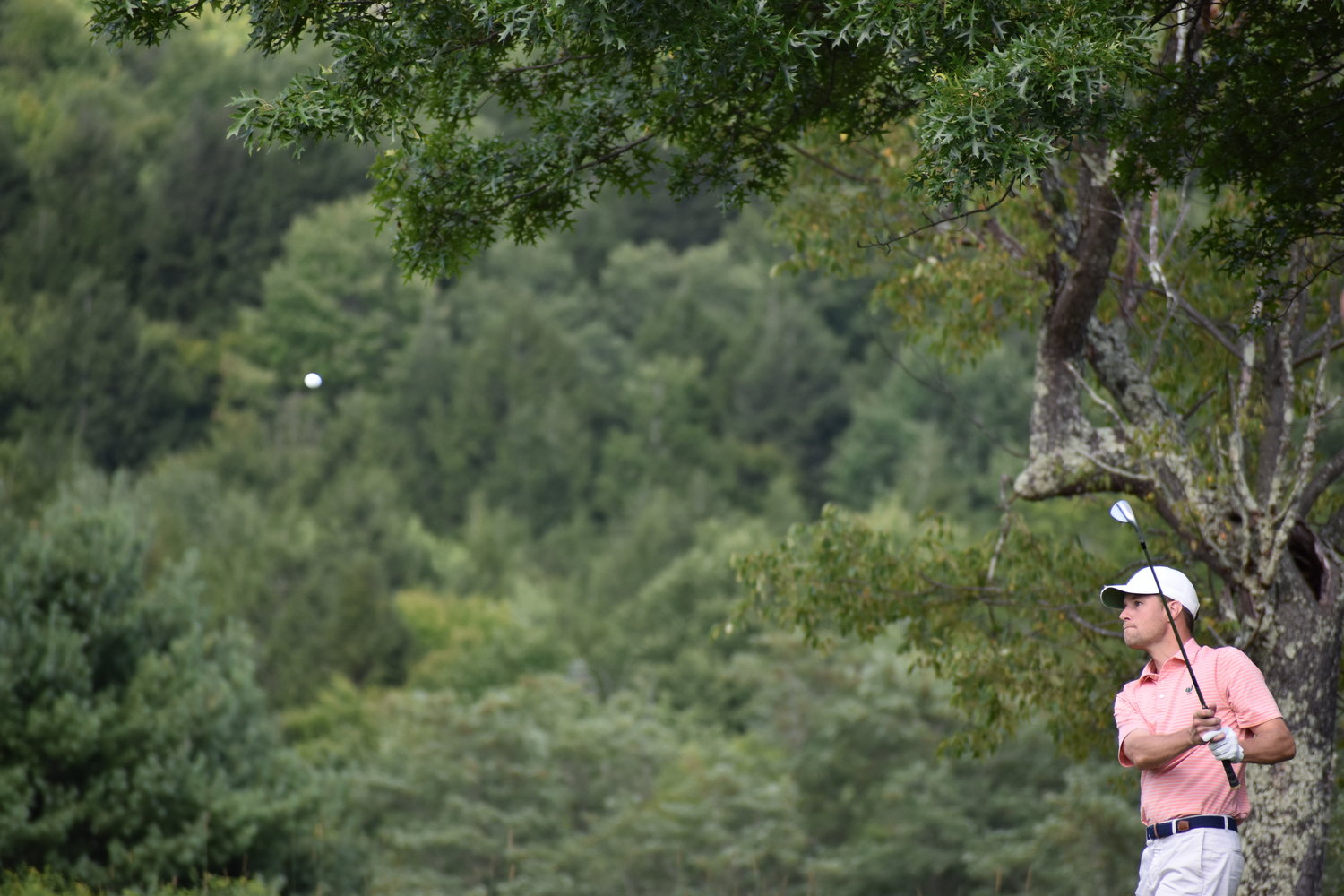 Semenetz follows his shot that he chipped onto the green on 16. The shot set the defending champs up for a par putt to tie the hole with Scuderi and Decker.
Anthony Morgano | Democrat 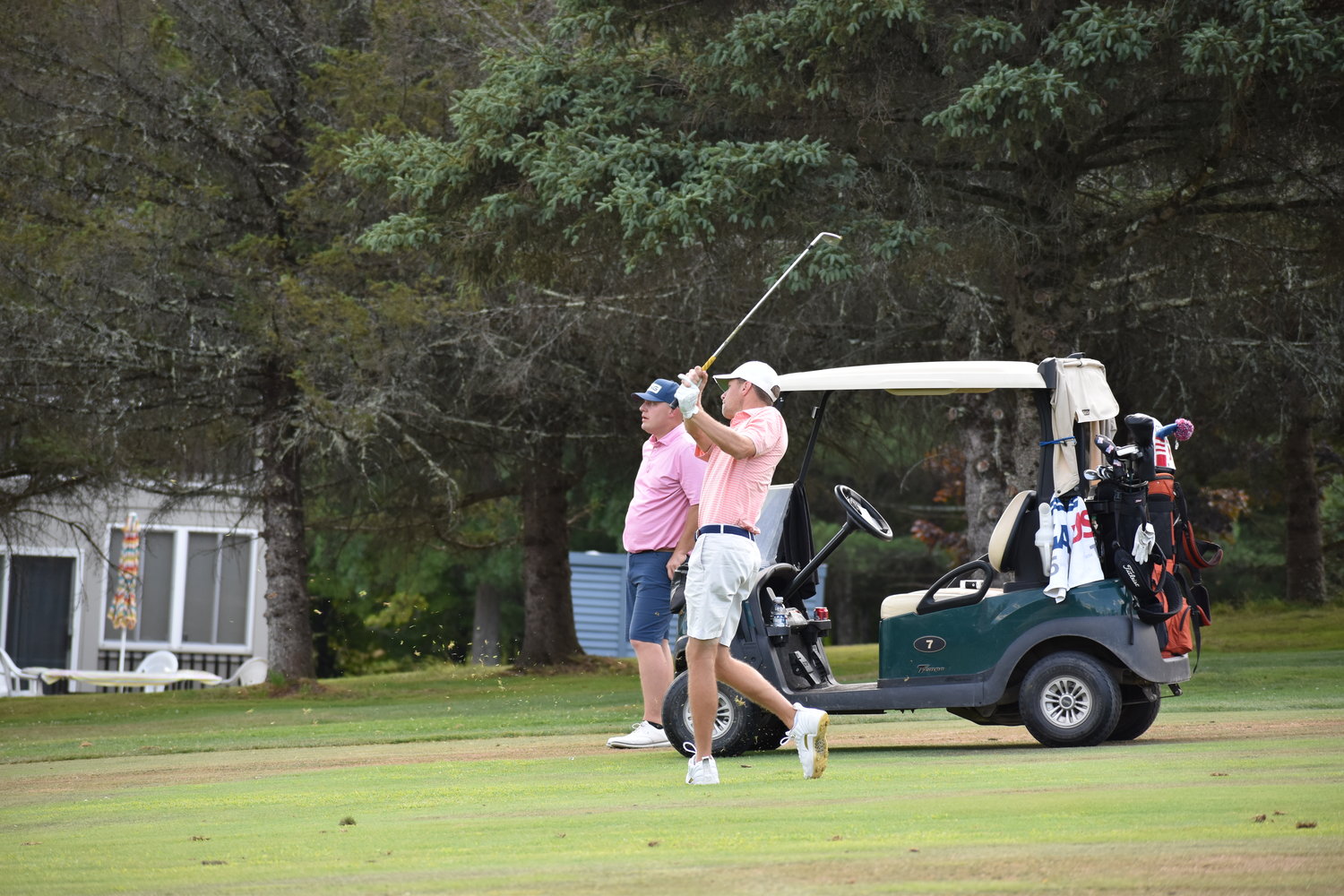 Sean Semenetz lofts his second shot on ten perfectly onto the green, just to the left of the pin for a birdie putt while his teammate Joe Winski looks on.
Anthony Morgano | Democrat 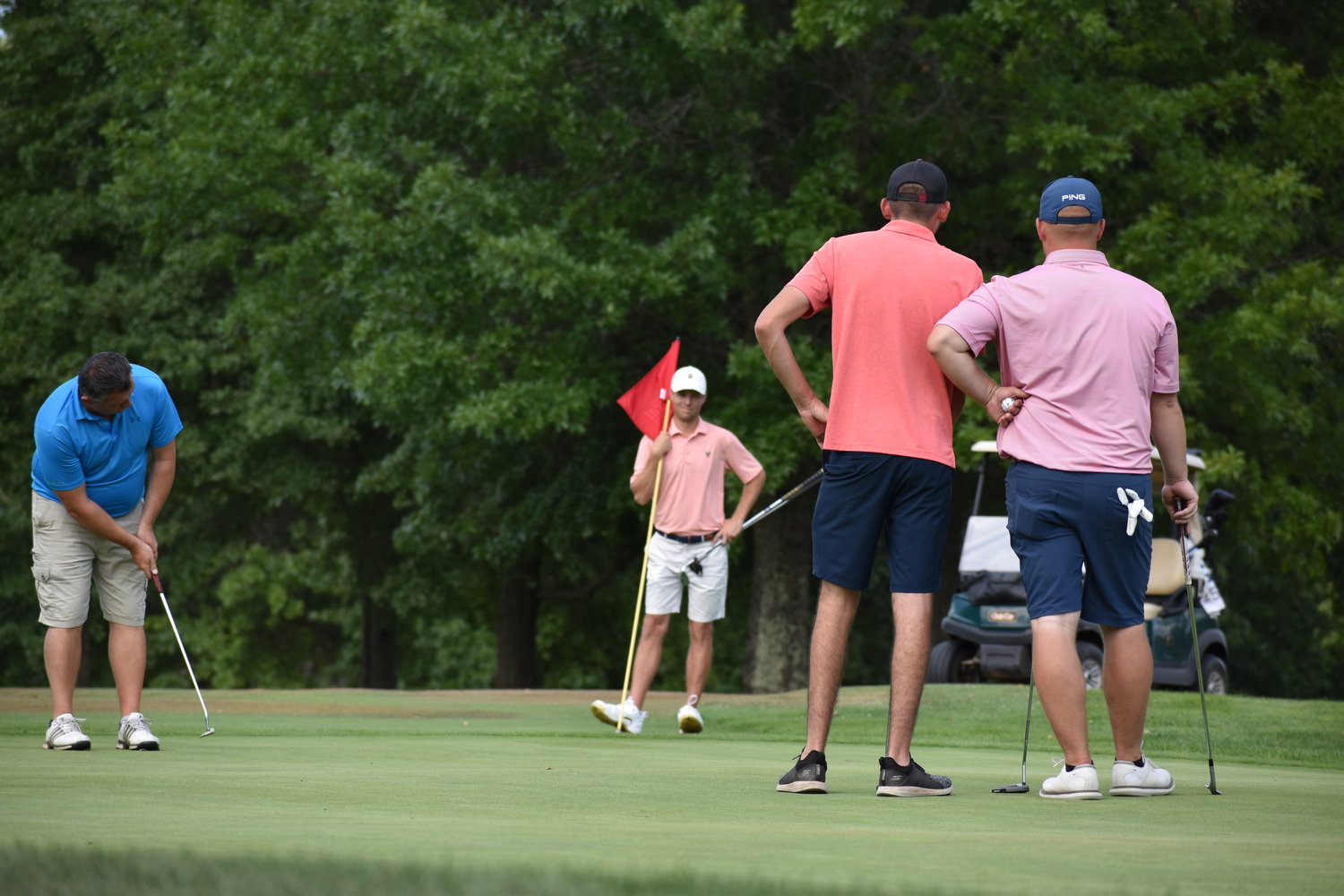 Michael Decker putts on 16. The ball took an unfortunate hop out of the hole and led to Semenetz and Winski tying the hole and keeping a two-up lead going into 17. Looking on is Sean Semenetz, holding the flag, Michael Scuderi and Joe Winski, right.
Anthony Morgano | Democrat
Previous Next
Posted Tuesday, August 16, 2022 6:30 am
Anthony Morgano

ynasty” gets thrown around in sports frequently. Sometimes a team just stands out with their continued success and they become the team to beat.

For the Sullivan County Democrat Two-Man Better Ball Golf Tournament, the duo of Sean Semenetz and Joe Winski have become that team.

For the third consecutive year, and their eighth win together, the two have continued to add to their legacy with a victory at the 41st annual Democrat Golf Tourney played at the Villa Roma Golf Course in Callicoon.

Although there have been a handful of back-to-back winners in the tournament, dating back to its inception in 1982 when the team of Mark and Mitchell Etess won the first two Democrats, no team had accomplished what Semenetz and Winski were able to do this past weekend.

The field expanded to 68 teams – 136 players – for this year’s tournament, with old and new faces taking to the course for the weekend. First time finalists, and Runner-Up team, Michael Decker and Michael Scuderi added to the mix.

The winningest team in Democrat history did not have the easiest road ahead of them, but they perservered against old faces and new for the victory.

“It’s honestly incredible that we’ve been able to win three times in a row as a team,” Semenetz said.

Winski added, “We went back-to-back three times, but this was the first time we were able to get the three-peat.”

Semenetz and Winski started as an 8th seed in the championship flight this year, after qualifying on Friday with a  two-under par 70 over the lightning fast Villa Roma layout But that refused to slow them down as they took on the Tommy Roseo-Collin Tallman team in the first round, winning 3 and 2.

In the second round, they squared off against another Roscoe hometown team, the top-seeded team of Chuck Husson and Bryan Thomas, who qualified on Friday with a stellar 67.

The defending champs won that round 4 and 3.

The team of Patrick Mainey and Sean McNally, fresh off a victory over Democrat Golf Tourney Hall of Famers Ken Cohen and Mitchell Etess, were the next team to face off against Semenetz and Winski.

But Sean and Joe were on a mission to make  the finals for the 4th time in five years and disposed of their opponents, 3 and 2.

The runner-up twosome – Michael Decker and Michael Scuderi – had a great weekend on their path to the finals.

Qualifying as the second seed in the Championship Flight, Decker and Scuderi started their weekend with a match against Corey VanKeuren and John Paulsen, winnning 2 and 1. Afterwards, they had to take on the uncle-nephew team of John and Joe Meyer, who both work at the Villa Roma Golf Course and have been playing extremely well all season.

The match was exceedingly close and came to hole No. 18 when Decker hit an amazing 225 yard shot into the par-5 green in two, and two putted for birdie to win the match.

The two then had to face the twosome of Tyler White and Michael Kaufman on Sunday morning’s semifinal matchup before preparing to take on the defending champs. The new finalists finished the semifinal round 5 and 4, and the Championship Match was set.

Sean Semenetz and Joe Winski got out to an early lead and never looked back in the final round. Winning four of the first six holes while tying the other two, the defending champions were quickly up four before the turn. On the 8th hole, the challengers were able to win one back with a birdie, their first of the final round, to cut the lead to three.

The newcomers had a chance to cut into that lead more on 9, but a miraculous second shot from below the hill that landed softly and rolled left kept Semenetz and Winski in the running for a par to tie the hole.

“That was a lucky shot,” Semenetz recalled. “Had that ball rolled right instead of left, it would have played much differently and been a much harder shot.”

After a brief clubhouse break, the two teams made the turn, where another great second shot from Semenetz set up the team for a birdie. They brought the score back to four up with eight holes to play. The two teams tied on 11, Scuderi and Decker won 12 with a birdie, and a missed opportunity by Semenetz on 13 ended up with a tie on the hole. Now down three with four holes left, Scuderi and Decker found themselves on the ropes.

The teams tied the par 4 14, but an incredible 50-foot pitch shot that went in the hole for an eagle won Scuderi and Decker the 15th hole.

With momentum at the back, Scuderi and Decker had an opportunity to win 16 as they both hit the green in two and had birdie putts. With Semenetz and Winski in the hole with par, Scuderi’s long birdie putt rolled past the hole. Decker surveyed his 14-footer for more than a minute before rolling his putt into the hole – but it might have a had a bit too much pace and popped out. The teams tied the hole and moved to the 188-yard, Par 3 17th hole with Semenetz and Winski up 2.

Scuderi and Decker would need to win both 17 and 18 to push the match to a playoff.

Semenetz, Scuderi and Decker all found the green with strong tee shots, and each had a 12-foot putt for bird to either win the match or send it to 18.

Unfortunately for the challengers,  their putts burned the edge of the cup and the teams tied with a par on 17.

Semenetz and Winski embraced Scuderi and Decker on the 17th green in front of a dozen carts full of appreciative onlookers that cheered the two finalist teams for putting on such a great demonstration of great golf at the 2022 Sullivan County Democrat Two-Man Better Ball Tournament.

Semenetz and Winski talked about their opponents and the fun they had this summer.

“It was our first time ever facing the Mike’s [Scuderi and Decker], they’re really good guys. The competition is always good, everyone plays great and the conditions were hard and fast, it was a different course for everyone this year.”

There are always things to be on the lookout for during the Democrat tournament weekend.

In the 41st installment of the event, a handful of records were changed or updated. Sean Semenetz tied Ken Cohen are now tied for the most wins as an individual with 9. Sean Semenetz and Joe Winski extended their Most Victories (as a team) record to 8.

Semenetz reached his 11th final, still four behind Cohen. Semenetz and Winski tied the record for Most Consecutive Finals’ with three. They tied Jack Jordan, Ben and Maxx Kleiner, and Ken Cohen.

And, most importantly, Semenetz and Winski took home the framed Sullivan County Democrat Championship flag trophies, becoming the first team in tournament history to win three in a row – truly a hard-fought and deserved reward.