GOSHEN- How could we ever forget?

Last spring there was no track and field. The pandemic wiped out the entire spring season as well as the fall which was postponed until this spring. The winter … 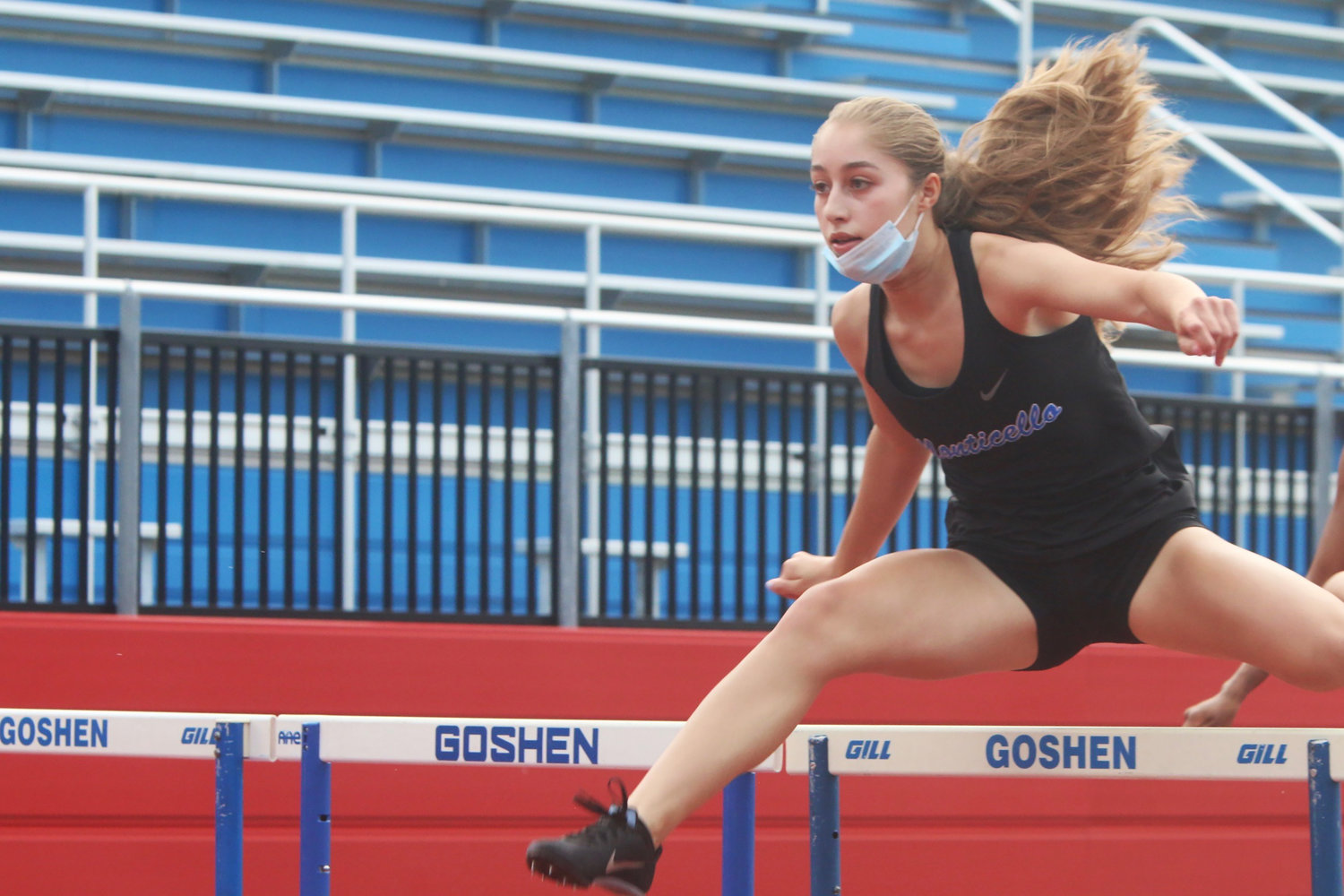 Monticello sophomore Taina DeJesus strides to victory in the Section 9 Class B 100 hurdles with a season best time of 15.80. Later she went on to capture gold in the 400 hurdles with another PR of 1:06.60. She made it three for three by running a leg in the Monti’s 4x100 relay.
Richard A. Ross | Democrat 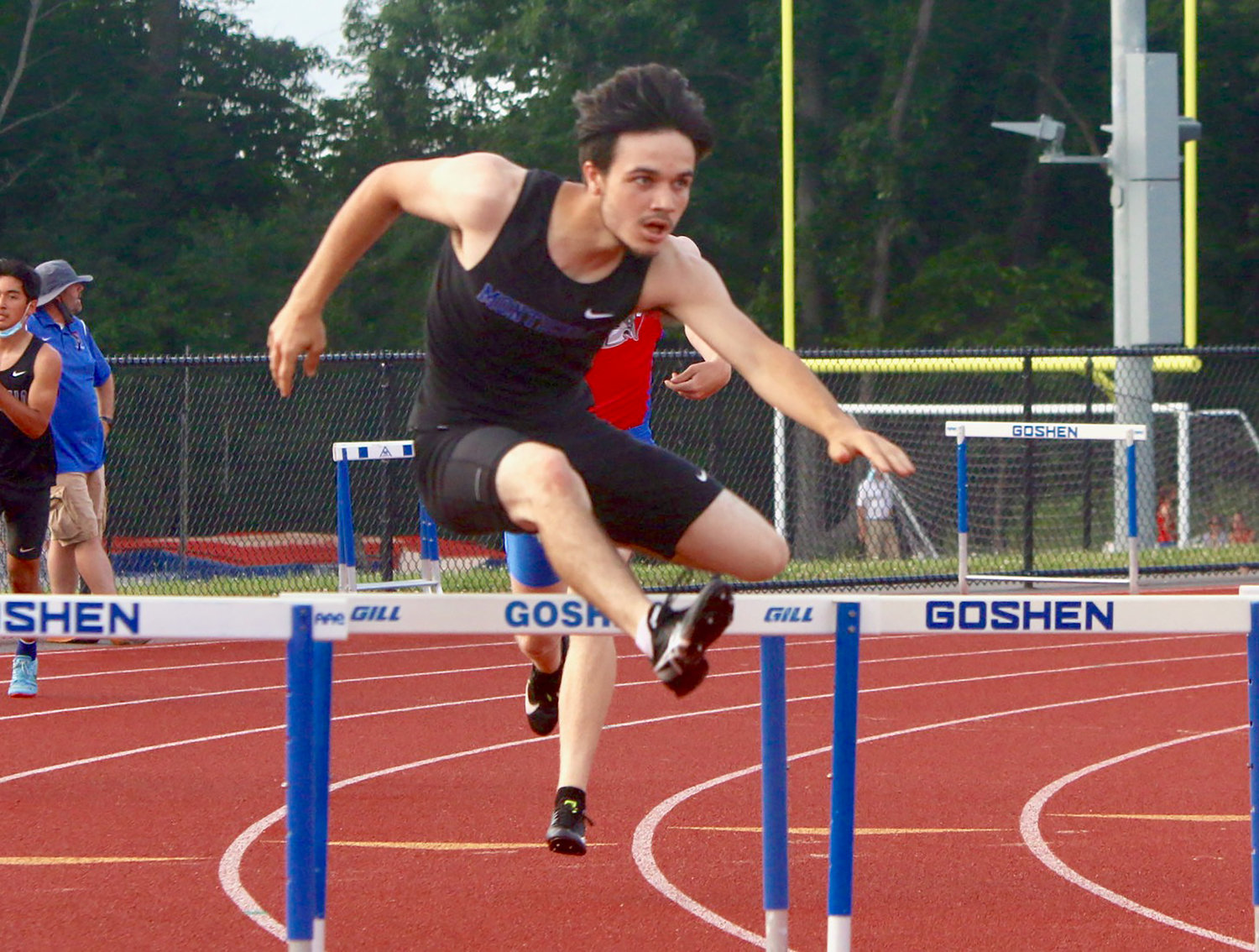 Monticello senior Elijah Rausch wins the 400 hurdles in a personal best time of 57.67. He captured second place in the 110 hurdles with a PR of 15.54.
Richard A. Ross | Democrat 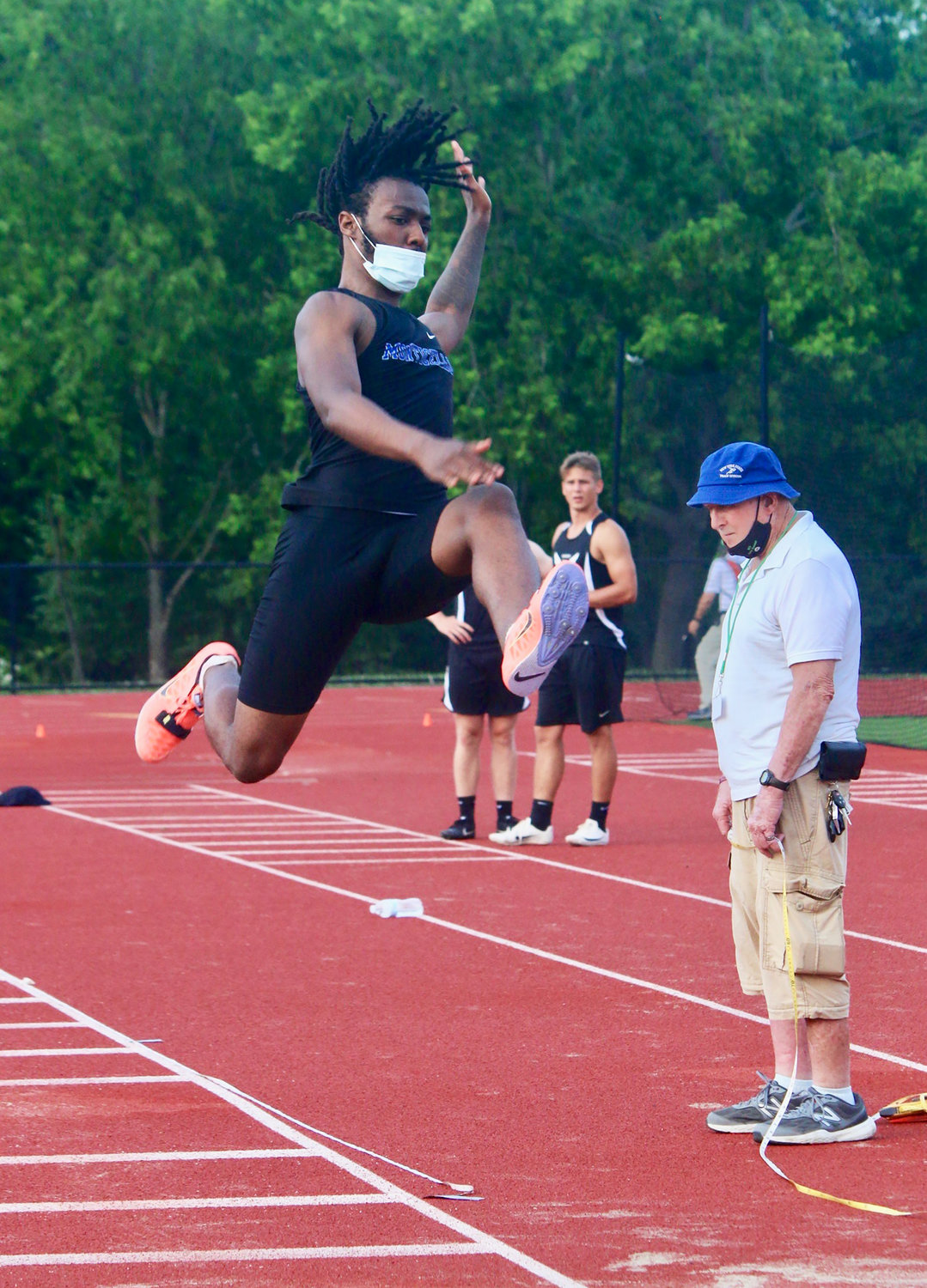 Monticello junior Jivonte Stubbs goes airborne in the long jump to take third place with a leap of 20-4.
Richard A. Ross | Democrat
Previous Next
Posted Friday, June 11, 2021 6:24 am
By Richard A. Ross

GOSHEN- How could we ever forget?

Last spring there was no track and field. The pandemic wiped out the entire spring season as well as the fall which was postponed until this spring. The winter season fell far short of what it should have been. But now as the pandemic is winding down, things are beginning to return to some semblance of normalcy. The operative words here are “some semblance.” So while there is no state track meet this spring nor the state qualifiers which would have determined its entrants, there are track sectional championships, albeit mutated this spring into separate meets with merged results.

All this being said, one thing hasn’t changed: Champions are just that, the best there is within their sphere which in this case happened to be the Section 9 Class B championship meet. Champions have two things in common besides their obvious talent: uncanny determination and a relentless work ethic.
That aptly describes Monticello gold medalists Taina DeJesus and Elijah Rausch who topped all Class B comers in the 400 hurdles. DeJesus also won gold in the 100 hurdles and Rausch garnered silver in the 110 hurdles. Both events featured his best performances ever. More on these accomplishments shortly.

Section 9 Class B track and field is comprised of 10 schools. With meets taking place in Cornwall, Goshen and Rondout Valley, the day produced its merged results and when all was said and done, Monticello sophomore Taina DeJesus and senior Elijah Rausch had emerged as hurdle champions.

DeJesus won the 100 and 400 meter hurdle crowns with her personal best times for this year in both events. She also ran a leg in the winning 4x100 relay (1:53.87) along with teammates Niyla Cole, Meg Cruz and Yamilette Escobar. She is nothing short of phenomenal. In the 100 hurdles she bested Goshen’s Gwendolyn Logan with a blistering time of 15.80 and later outpaced the field in the 400 hurdles with a time of 1:06.60.
Monti senior Elijah Rausch won his event at Goshen in the 110 hurdles with a personal best time of 15.54. In the merged results of all Class B he was second to New Paltz sophomore Noah Brown who posted a time of 15:28. But later in the day Rausch blazed to win the Section 9 400-meter hurdle title with his best time of 57.87.

The Class B sectionals were happening in three separate pods, Cornwall, Goshen and Rondout Valley. The Cornwall meet began on time but at Goshen, athletes and coaches had to wait out thunder delays that pushed the start of the meet back an hour and 20 minutes from its scheduled start. Despite the long delay, Monticello’s elite competitors were in top form.

It should be noted that in the 110 hurdles, Monti junior Jivonte Stubbs pushed Rausch hard with his own PR time of 15.62 to come in second in regional meet and fourth overall in the Section. Stubbs was third overall in the long jump with a leap of 20-4.

Other Monti medalists included junior Evan Waterton who took second in the 1600 and the 3000 steeplechase with times of 4:38.32 and 10:17.53 respectively. Not having a field on strong competitors made for much slower times for the National steeplechase leader and top NYS 1600 runner. Yamilette Escobar placed second in the long jump with a leap of 13-7.

The boys 4x400 relay team took second place with a time of 3:34.50 through the combined efforts of Rausch, Jaykim Abraham, Jujuan Swasey and Evan Waterton. The boys 4x100 relay came in third with a time of 45.00. That race was run by Rausch, Jadon and Jujuan Suasey and Jivonte Stubbs. Jadden Bryant was third in the triple jump with a mark of 40-3.