JEFFERSONVILLE - What was billed as a showdown turned into a one-sided affair as Jeff-Youngsville gained a decisive 27-6 victory over visiting Eldred on Saturday. It … 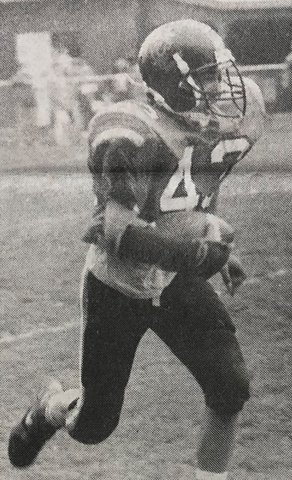 Cory Gaebel of the Jeff-Youngsville Trojans, above, scored a touchdown in Saturday's game versus Eldred and also led the Trojans defense with three solo tackles and nine assisted ones.
Democrat File Photo 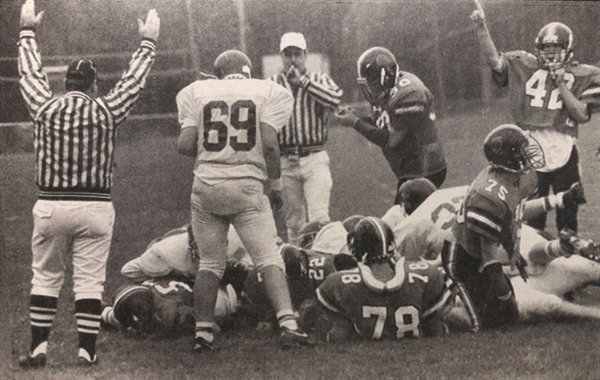 The officials signal a touchdown as Jeff-Youngsville quarterback Bob Hubert (22), in center on the ground, plunges into the end zone for his team's first score. Teammate Bryan Bury (42) celebrates at far right.
Democrat File Photo by Frank Rizzo
Previous Next
Posted Monday, September 28, 2020 12:00 am
Frank Rizzo

JEFFERSONVILLE - What was billed as a showdown turned into a one-sided affair as Jeff-Youngsville gained a decisive 27-6 victory over visiting Eldred on Saturday. It was the Division V opener for both teams.

“I don't think they were expecting what they saw today,” said Jeff-Y coach Dave Franskevicz, referring to Eldred's scouting of the Trojans' 20-6 home loss to Unatego the Saturday before.

“Our kids were fired up today. They have a lot to prove, from last week, from last year, even from two years ago,” Franskevicz added. “I want to get this program back to where it was.”

So thorough was Jeff-Y's domination that the Trojans outgained Eldred 319-31 in total yards. Thanks to a number of negative gains, the Eldred ground attack could gather no more than 12 yards on 28 carries.

Bryan Bury gained the bulk of the Trojans' 207 rushing yards, getting credited for 178 on 34 carries.

“We saw (on the videotape) that Hancock got big running plays to the outside,” Bury said, referring to Eldred's

The Trojans received the opening kickoff and moved the ball steadily downfield, thanks mainly to Bury's runs, the longest of which was 24 yards. Bury was within yards of the goal line when he lost the ball on a tackle by Jason Hettler.

Jeff-Y pinned the Yellowjackets and forced a punt, by Butch Reinhart. Jeremy Smith deflected it, and Bury fell on the ball at the three. On third down Trojan quarterback Bob Hubert sneaked the ball in and then kicked the extra point for the 7-0 lead.

Eldred followed the Trojan kickoff with its most effective drive of the day, culminated by a 10-yard pass from Reinhart to Jason Hettler. The drive was aided by a facemaking and unsportsmanlike conduct penalties against the Trojans.

After exchanging possessions, the Trojans started their next scoring drive from their own 36. Bury brought them into Yellowjacket territory with a 25-yard run to the Eldred 26, but the big play came on fourth-and-five from the Eldred 20. In what came to typify Eldred's frustration on the day, a pass from Hubert to Cory Gaebel was tipped by Eldred defensive back Lemuel Rios and back into Gaebel's hands. The Trojan tailback ran it to the seven. After Eldred stopped Bury twice, Gaebel ran a reverse in for the touchdown. Hubert kicked the extra point.

“They were keying on Bury, overplaying so hard on him,” Franskevicz explained his play selection. “I don't think they've seen that play before.”

According to Eldred coach Frank Kean, “That score bent our backs a bit,” - and the next one would break them.

The Trojans kicked off, Reinhart fumbled, and Michael Bury recovered on the Eldred 34. A big run by his brother Bryan was called back for a penalty, which gave the Trojans a first-and-25 from the Eldred 49. Hubert then hit Scott DuBois, running a sideline-hugging pattern, with a 49-yard scoring strike. With the extra point Jeff-Y went into the half with a 21-6 lead.

The second half, marred by a steady rain, was more even. Several drives of varying lengths were unsuccessful. With 1:47 left in the game a mix-up in the Eldred secondary left Robert Brennie all alone for a 28-yard touchdown pass from Hubert. The extra point was unsuccessful and the score was finalized.

“We wanted to see our kids start hitting,” Franskevicz said. “We let up in the second half against Unatego. You can't play 50 percent and expect to win. We drove that into their heads this past week (in practice).”

The Trojan statistical sheet showed, besides Bury's big game, a 5-for-8 passing day for Hubert, with 112 yards and one touchdown. Robert Brennie caught two of the passes for 44 yards and the touchdown. Defensively, Cory Gaebel had three solo and nine assisted tackles. One stat the Trojan coaches did not like was the 11 penalties for 110 yards charged to their team.

For Eldred it was a quiet bus ride home.

“I think everyone did some soul searching,” Keane said on Monday morning. “We have to come together as a team, play less as individuals.”

Kean thought his team was hurt by the one-game layoff after the opening loss to Hancock. The Yellowjackets were supposed to play Roscoe last week because both teams' original games, with out-of-county opponents, were canceled. But the Section IX football powers disallowed it, citing by-laws that prevent divisional opponents from playing each other twice in the regular season. Roscoe will visit Eldred October 17.

“We haven't come up from the Hancock game,” Kean said of his team's progress. “We've got to get back to fundamentals, we're weak there.”