Henry Inman was certainly not the first man ever to enjoy the quiet pursuit of trout in Sullivan County's bountiful waters, but he surely provided us with one of our most enduring tributes to the … 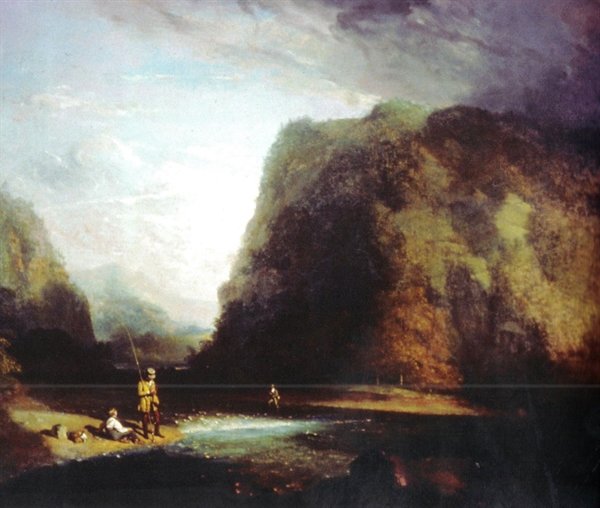 Henry Inman was certainly not the first man ever to enjoy the quiet pursuit of trout in Sullivan County's bountiful waters, but he surely provided us with one of our most enduring tributes to the popular pastime.

Although rarely seen today-- the original was only fairly recently discovered, on “Antiques Roadshow” and hangs in the Munson-Williams-Proctor Institute museum in Utica, NY-- Inman's 1841 oil painting “Trout Fishing in Sullivan County” was, in its time, the most renown landscape work of one of America's most renowned artists.

Trout fishing in this area dates back at least to the days of the Lenape, who developed a rather unique method utilizing the bark of the walnut tree, which was mashed into a pulp and poured into the riffles of a stream. When it mixed with the water and was ingested by the trout, it stupefied them, so they floated to the surface, where they could be scooped out in great numbers.

No doubt more conventional means of trout fishing were employed by the early European visitors to Sullivan County waters, who began arriving with the dawn of the 19th century. In his 1996 book, “The Beaverkill,” author Ed Van Put notes that when “American Turf Register and Sporting Magazine,” “the first (publication) of its kind in the United States, made its debut in 1829, the Beaverkill was already well known to trout fishermen.”

The late historian, Alf Evers, writing in his 1972 book, “The Catskills: From Wilderness to Woodstock,” records that, “(I)n 1832 Charles Fenno Hoffman, who was then beginning a brief but notable career as poet, editor, and novelist, told of watching a six-pound trout being taken from Sullivan County's White Lake.”

About this same time, the young portrait artist Inman was familiarizing himself with the sporting opportunities the area offered. Inman was born at Utica on October 28, 1801, and moved to New York City with his family in 1812. He received an appointment to the U.S. Military Academy at West Point, but decided to pursue an art career instead, signing on for a seven-year stint as an apprentice to the portrait painter John Wesley Jarvis.

By 1823, Inman had set up his own studio on Vesey Street in the city, where he began painting portraits, miniatures and genre pieces. “The Dictionary of American Biography” notes that “many eminent sitters came to him. Few American portraitists since (Gilbert) Stuart have to their credit a more imposing list of distinguished patrons.”

But Inman's passion for fishing soon spilled over to his work. Many painters had been attracted to Catskill scenes by the success of Thomas Cole, and Evers notes that “landscape painter Asher B. Durand was painting and fishing from bases in local inns and farmhouses by the 1840s, and he was often accompanied by students who might acquire painting and fishing skills simultaneously.” So when portrait painting commissions became fewer and farther between as photography was developed, Inman, too, turned to landscape art.

“No painter-fisherman was more enthusiastic about the Catskills than Henry Inman, the fashionable portrait painter who delighted in working on Sullivan County fishing scenes,” Evers writes. “Upon Inman's death in 1846 it was written that ‘in trout fishing especially he excelled…A more ardent, accomplished or delightful disciple old Izaak Walton never had. In throwing a fly or spinning a mirror, he had few equals.'”

In his 1987 book, “The Art of Henry Inman,” William H. Gerdts writes that the artist's love for the scenic beauty and tranquility that went along with fishing was evident in his work. Gerdts writes that “unfortunately many of Inman's essays into the genre remain unlocated, although his finest and most ambitious independent venture, “Trout Fishing in Sullivan County, New York” of 1841 has recently come to light.”

It's hard to imagine a more poetic and pictorial tribute to the sport that has long defined Sullivan County in the early springtime.