JEFFERSONVILLE- “I’ve looked at life from both sides now. From win and lose, and still somehow it’s life’s illusions I recall. I really don’t know life at … 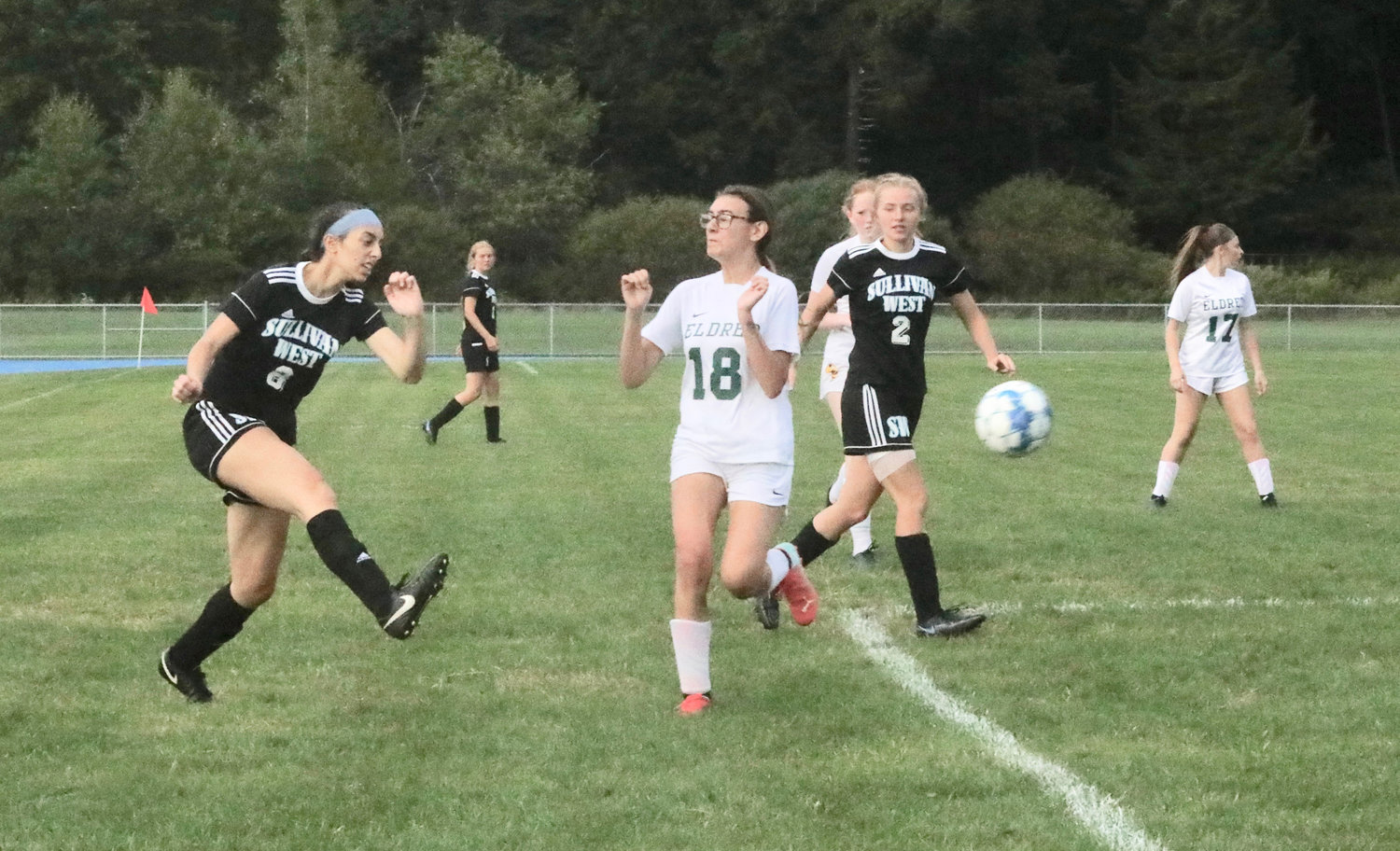 Sullivan West junior Viola Shami sends the ball past defender Rayanna Quintona. Shami recorded the hat trick with a trio of goals in the 8-0 shutout of young Eldred.
Richard A. Ross | Democrat 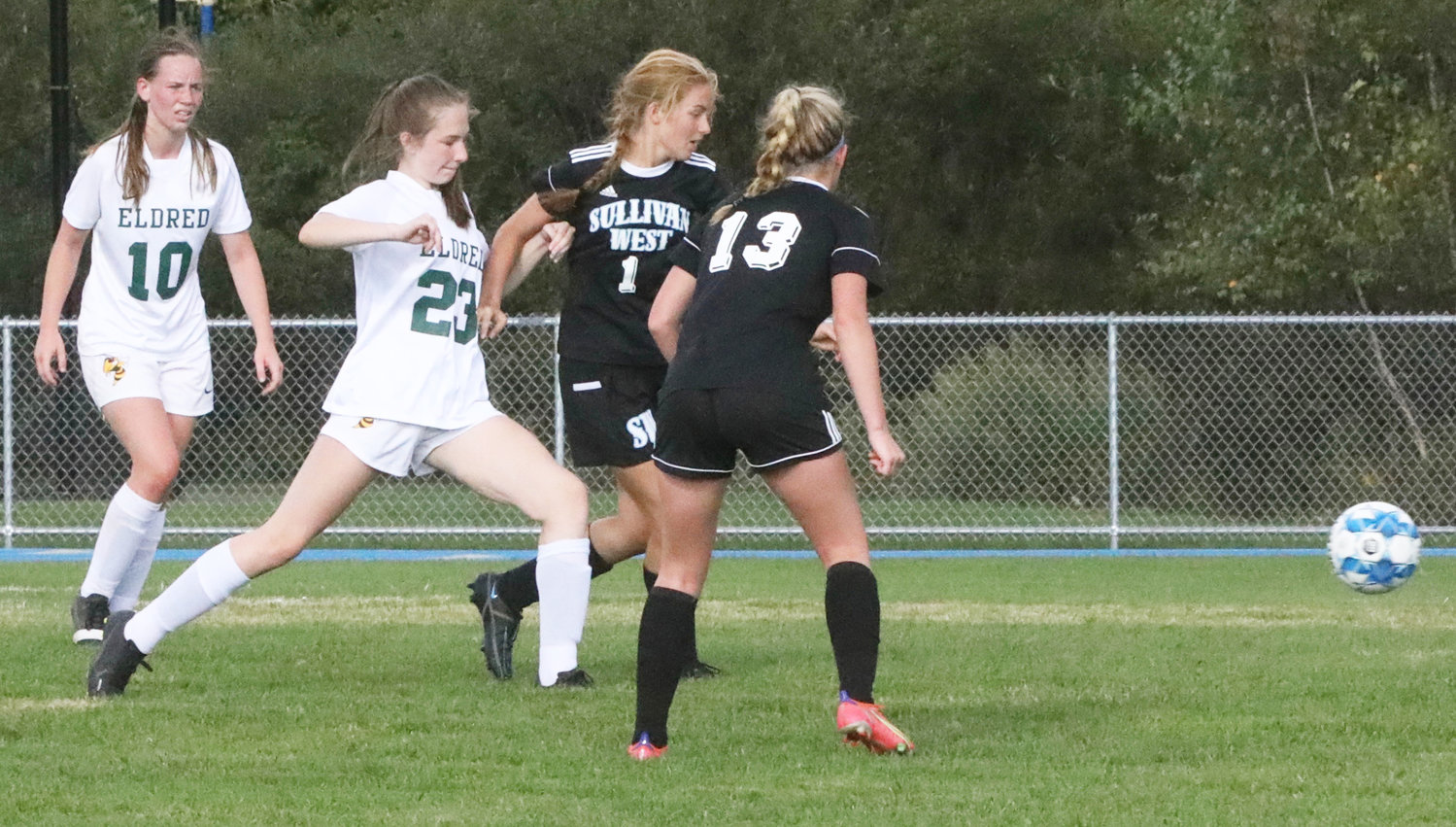 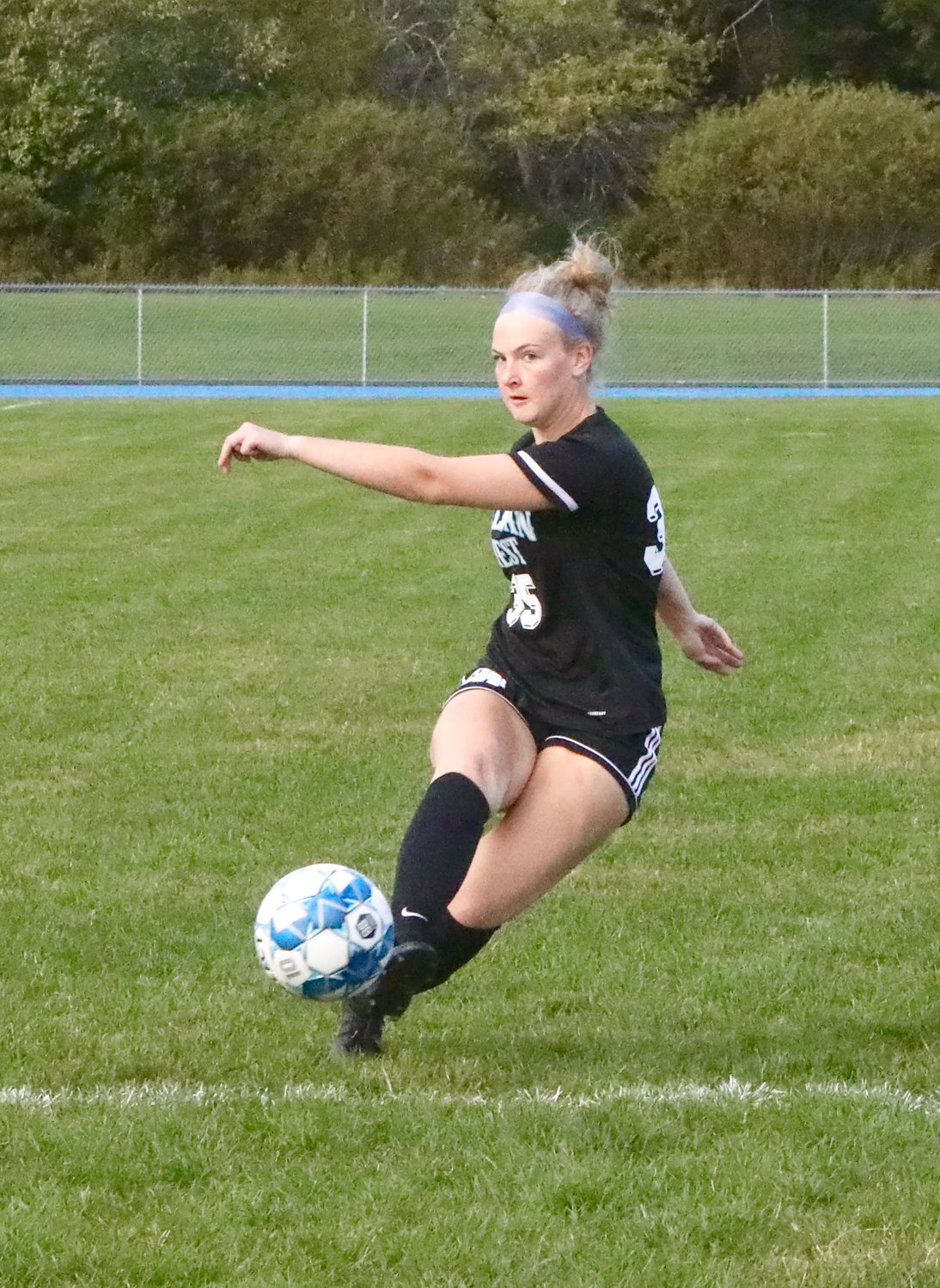 Sullivan West senior Lucia Kennedy fires a shot on goal. She scored one of the eight goals on the day.
Richard A. Ross | Democrat
Previous Next
Posted Friday, September 23, 2022 6:30 am
Richard A. Ross

JEFFERSONVILLE- “I’ve looked at life from both sides now. From win and lose, and still somehow it’s life’s illusions I recall. I really don’t know life at all.”

So inform the lyrics from Joni Mitchell’s classic ballad “Both Sides Now.” For the Sullivan West Lady Bulldogs soccer team, the experience of falling 6-0 to the O’Neill Lady Raiders’ exquisite brand of soccer was one side of the coin. But then, the Lady Westies flipped the coin over and turned the tables by doing the same thing to Eldred to the tune of 8-0. The season is still young, but the Lady Bulldogs now understand the analogy of “both sides now.”

Thankfully, they will not see any other teams in the regular season with the precision that O’Neill evinces. It’s a great experience to see soccer played at its finest level. This non-league match against Eldred featured a major imbalance between a bigger, faster, experienced and more physical Sullivan West team versus a younger, improving Eldred squad. When SW junior Viola Shami banged home a goal by Eldred senior keeper Grace Loreto with less than a minute gone by, it seemed like the die was already cast. A second first half goal by Abby Parucki with an assist from Nicole Reeves featured 40 minutes with nary a shot on goal by the Lady Yellowjackets.

SW’s midfielders and defenders turned the ball back towards the Eldred goal with every attempted advance. The second half witnessed the opening of the floodgates with six more Sullivan West goals tallied, including two more by Shami as she recorded the hat trick, two by junior Sophie Flynn and one apiece from Elanie Herbert on a penalty kick and a late goal by senior Lucia Kennedy.

The Lady Dawgs under first-year coach Megan Brockner are quickly gelling. They have ten seniors and 12 juniors with no sophomores or freshmen on the squad. Eldred is now coached by former soccer keeper standout Sami Clemons and assisted by former Sullivan West striker Sam Becker.

Curiously, they used to be fierce rivals in high school. In fact, Becker still fumes over the broken wrist she sustained at Eldred. The two have buried the hatchet and are concentrating on helping the girls stay focused and improving. Eldred fell to 2-3 on the season while Sullivan West improved to 2-1-1.

The 4-2 outcome that originally favored Downsville was changed to a tie as the penalty kicks were only in force because it was a tournament. SW beat Manor in the other game in the tourney. They faced Manor again on September 22 under the lights at Roscoe while Eldred traveled to Burke for a non-league fray.

Coach Clemons had this to say: “We have a really young team. There’s a big difference between the varsity level and modified where they were playing last year. We played a lot better this week. We only have to beat Manor this season. Chapel Field doesn’t have a team.”

SW coach Megan Brockner said “Our communication is definitely getting better. We tried some girls out in different positions today and we got to see some new options going forward in the season. We need to keep the ball on the ground. Short, quick passes are our goal for upcoming games.”

Sullivan West had 39 Shots, with 27 of them on goal. They had three assists. Elanie Herbert recorded two saves and Abby Parucki had one. Eldred had a total of six shots with three of them on goal. Grace Loreto had 19 saves.

The last full measure of devotion