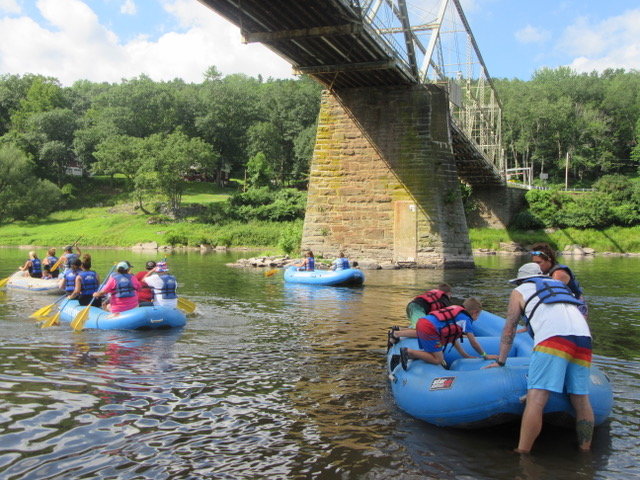 Participants in the Upper Delaware Council’s 34th Annual Family Raft Trip launch beneath the Skinners Falls-Milanville Bridge for their paddle to Lander’s Narrowsburg base on August 7.
Contributed photo
Posted Friday, August 12, 2022 7:00 am

The turnout included 47 adults and four children ages 4-12 to take advantage of the host livery’s discounted group rates and the trip coordination provided by the UDC.

The UDC organizes this public event on the first Sunday of August each year on alternating sections of the Upper Delaware Scenic and Recreational River with the goal of promoting awareness and stewardship through direct contact with the recreational resource.

The Upper Delaware Council was created and mandated in 1988 by an Act of Congress.

It oversees a partnership of Federal, two States, and local governments to manage the 73.4 mile designated Upper Delaware Scenic and Recreational River.

The UDC fills a vital role in the relationship between the National Park Service and the local communities, protecting home rule authority, safeguarding private property rights, and advising towns/townships on meeting the River Management Plan Land and Water Use Guidelines.

The organization has been funded through a federal allocation, flat since its inception, with neither the State of New York nor the Commonwealth of Pennsylvania contributing their shares. Despite funding challenges, the UDC has fulfilled its core responsibilities set out in the federal legislation for the benefit of the approximately 250,000 visitors each year and all those fortunate enough to live in the Upper Delaware River Valley.