He's beautiful, smart, loyal and a comedian. I'm so glad my neighbor, Kris, talked me into taking this cat. When I go outside, he goes with me and sticks by my side while I'm out there. When I go for … 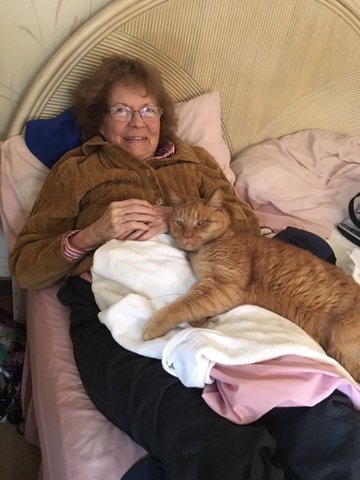 TJ is such good company for me.
CONTRIBUTED PHOTO
Posted Thursday, September 10, 2020 12:00 am
June Donohue - Columnist

He's beautiful, smart, loyal and a comedian. I'm so glad my neighbor, Kris, talked me into taking this cat. When I go outside, he goes with me and sticks by my side while I'm out there. When I go for a swim in Kris' pool, he walks around the edge of it watching me like a lifeguard who is not too sure I know how to swim.

I have two friends that are not cat people. They have always preferred dogs. They have made the exception when it comes to TJ however. One is my neighbor, Pete Smith. He says it's because my cat does not act like a typical cat. He interacts with people instead of sitting on the sidelines. Sometimes he races across my yard and into Kris' as if he's about to catch something and then climbs half way up a tree and immediately jumps down just for the fun of it.

Another friend who usually doesn't care much for cats is John Bale. He has never met TJ but is a fan of his just from seeing pictures of him in funny poses and hearing me describe his antics.

There are times when he does act more like a dog than a cat. Another neighbor has the cutest little dog and when she came walking by with him the other day, TJ hopped off the bench we were sitting on and went up to Carmen's dog, who is about the size of a toy poodle and touched noses with him. I never saw a cat do that before and neither had Carmen.

TJ still considers Kris' dog, Gracie as his dog too. When Kris takes Gracie for a walk, TJ walks along after them. A few days ago Kris took Pete's dog Danali along on the walk too. TJ followed along at first but then hurried to get in front of Danali and then turned around and swiped at him with his paw. The message was “You don't belong with my family.”

TJ is such good company for me. Whether I am taking a nap or in bed for the night, he cozies up to me. I feel so grateful and lucky to have him.