LIVINGSTON MANOR - “Location, location, location.” Those are the bywords of promising real estate advertisements, positing the idea that where something is situated makes all the … 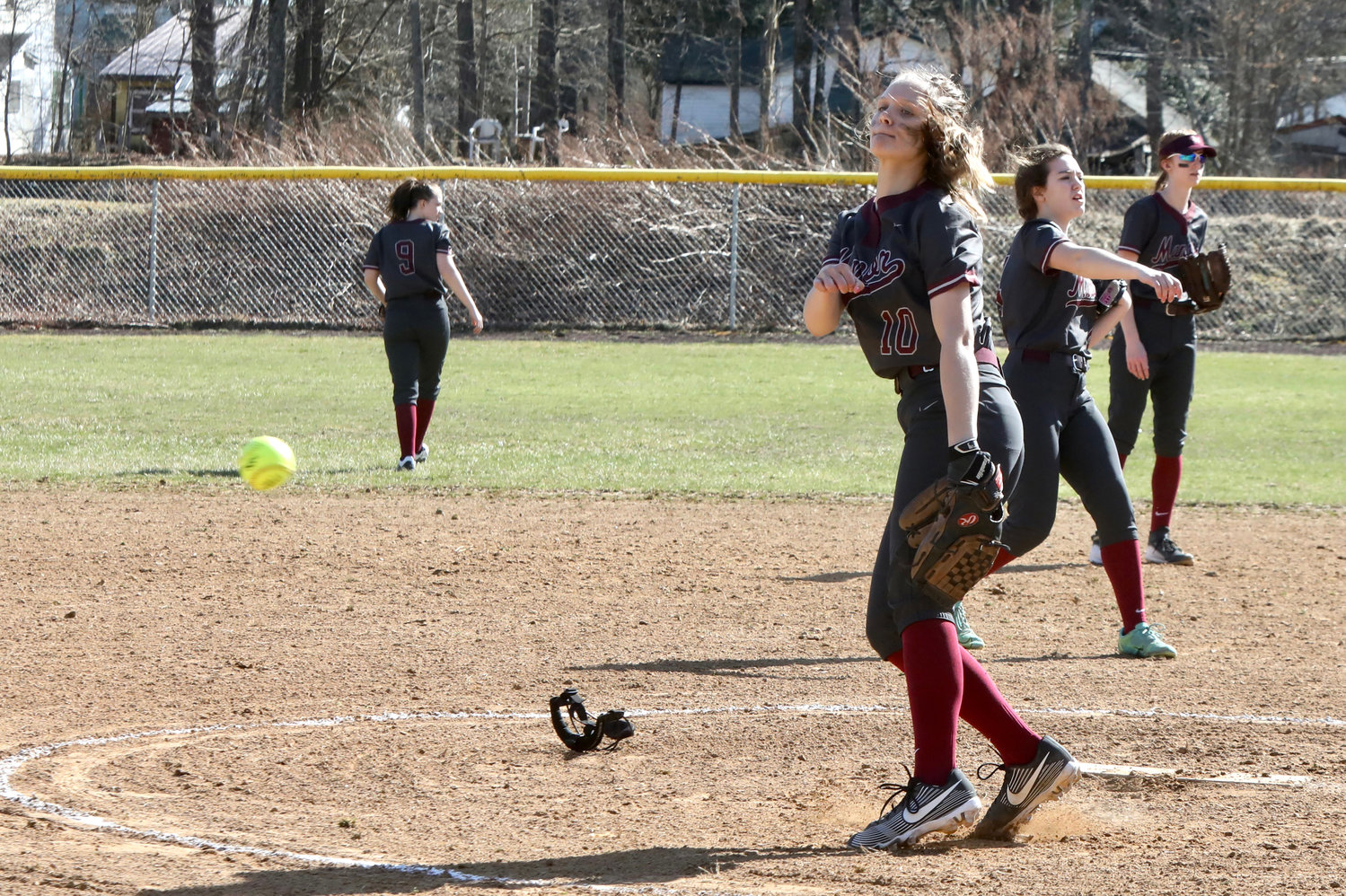 Manor hurler Mackenzie Carlson fires a warmup pitch prior to the game against Sullivan West. She showed good control in the complete game victory netting 12 strike outs and yielding only two walks. Only one of Sullivan West’s five runs was earned.
Richard A. Ross | Democrat 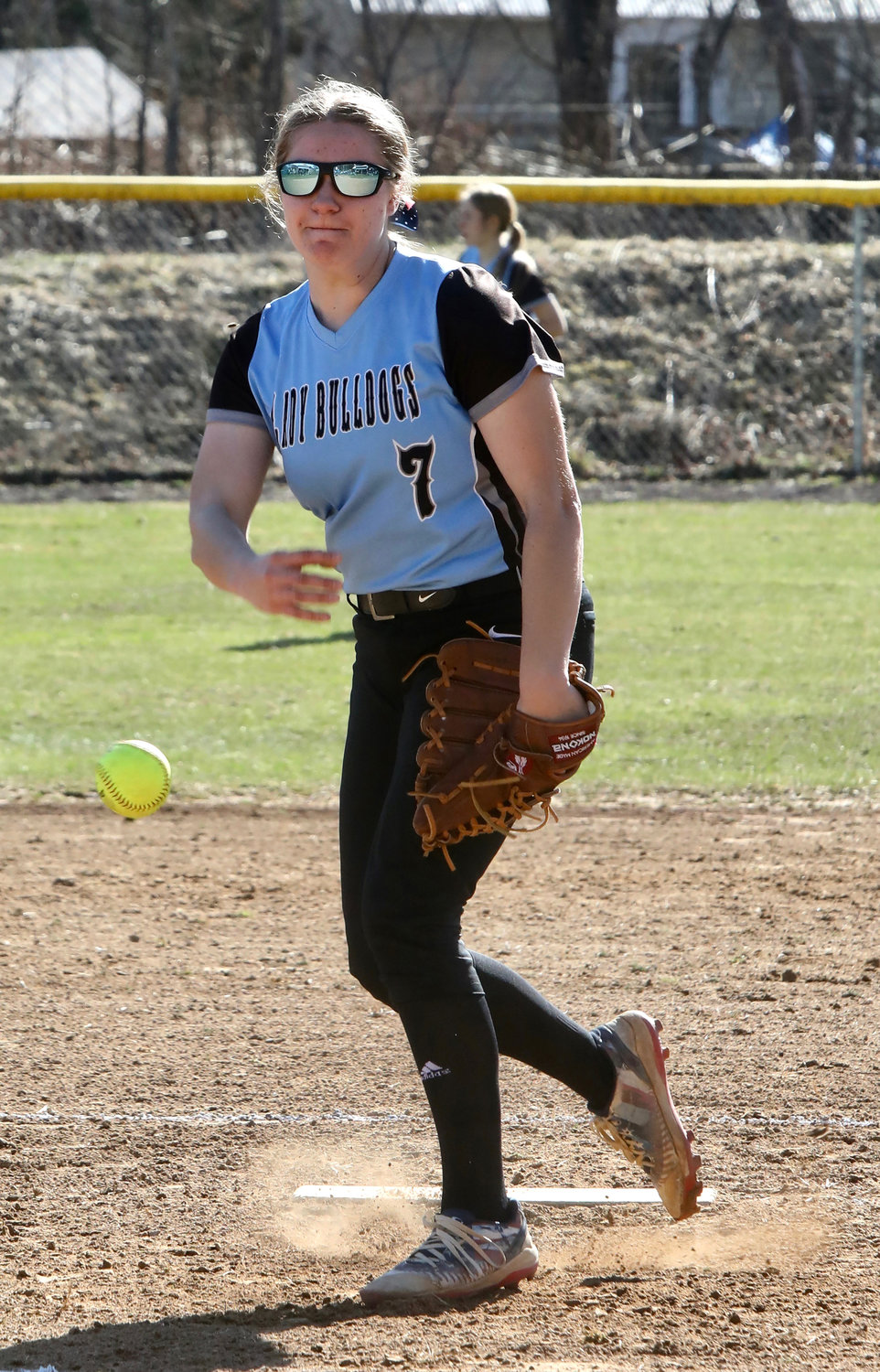 Sullivan West senior Riley Ernst, who is bound for SUNY Delhi to play softball as well as basketball, takes her warmups. Ernst is a fine pitcher but in the past two games she has struggled with location at times, something that will certainly straighten itself out as the season goes along. Walks led to runs as Ernst only gave up a pair of hits in the 9-5 non-league loss.
Richard A. Ross | Democrat
Previous Next
Posted Friday, April 15, 2022 6:20 am
Richard A. Ross

LIVINGSTON MANOR - “Location, location, location.” Those are the bywords of promising real estate advertisements, positing the idea that where something is situated makes all the difference in its value. The same phrase holds true for pitching. When it comes down to successful hurling, speed and movement are vital. But above all else, a pitcher needs to spot the location of the ball and that means throwing far more strikes than balls. Walks are detrimental as they put runners on base.

For the team at bat the old adage, “A walk’s as good as a hit,” always proves its veracity. In the world of high school softball, walks invariably lead to stolen bases and putting runners in scoring position.

For Sullivan West senior, Delhi-bound Riley Ernst, working on her pitch location is the prime objective as she seeks to propel the Lady Bulldogs into a successful season, her last on the mound in a noteworthy high school career. Ernst can adeptly strike out batters as she proved in this game and the one prior, but in both instances too many walks gave the opponents more opportunities to score runs.

Locating her fast ball holds the same agenda for Manor’s Mackenzie Carlson. Carlson would yield only two walks in her complete game 9-5 win. Only one of those runs was earned. This was Manor’s first home game of the season and as first year Coach Nicholas Wyss would later note, there were some early jitters.

Carlson struck out Nicole Reeves to start the first stanza, but yielded a hot single to Liz Reeves, who promptly stole second. An E6 plated the first Westies’ run. Elanie Herbert drove in the second run with a single and Karlee Diehl reached on an E4 to make it 3-0. A sac fly by Taylor Brustman netted the fourth and final run of the stanza before Carlson fanned Hannah Abplanalb to end the inning.

When the dust cleared, Sullivan West had the early 4-0 lead. Ernst took to the mound and got the Lady Wildcats in order. Both pitchers retired the side 1-2-3 in the second showing good location and netting strike outs. Carlson yielded her only two walks of the game in the third inning, but Sullivan West failed to capitalize. She showed excellent control the rest of the way.

Ernst, on the other hand, was less consistent in finding the strike zone. In the third inning she walked a trio of batters and hit another. The result was two Manor runs without a hit as the Lady Wildcats cut the deficit in half. After Carlson retired the side in order in the fourth, Manor got the first two runners on as Jocelyn Mills reached on a third strike and EmmaRae Owen singled. Fielder’s choices off the bats of Hailey Wolcott and Jillian Carlson tied the score.

Sullivan West would score what amounted to be their final run of the game in the top of the fifth. Liz Reeves led off with a single and Diehl drove her home with a base hit. That 5-4 lead was short lived as Sullivan West had a nightmare of an inning in the bottom of the frame that allowed Manor to add five runs to take a 9-5 lead that would stand up the duration of the game. Four walks and a hit batter plus two costly errors paved the way for the big inning. The Lady Westies failed to score in the sixth and seventh. Carlson struck out the final two batters to end the game.

Sullivan West fell to 1-2. They had lost to O’Neill the previous day by the score of 13-7. Manor improved to 2-0 adding this win to a season opening road win over Downsville.

Manor Coach Nicholas Wyss said, “Mackenzie can really bring it. In the first inning we just had a little first home game nerves. We’re still kind of a young team. I’ve got a couple of freshmen out there and tenth graders. These girls work harder than I’ve ever seen. I couldn’t ask for a better group.”

Sullivan West Coach Anthony Durkin knows his team has a lot of work to do. Cutting down on those walks and errors will be priority one as the team begins to take on league opponents.

The Lady Wildcats traveled to Tri-Valley on Wednesday to take on the Lady Bears, defeating them 14-0 behind another complete game by Mackenzie Carlson. Carlson struck out 10 in a complete game 1-hit performance, while going 2-2 at the plate with a home run, single, four RBIs and four runs scored.