STANLEY, IDAHO – When Alec Milucky signed up to work at the Sawtooth Fish Hatchery in Stanley, Idaho this summer, he also wanted to wet his line in the many great fishing spots out … 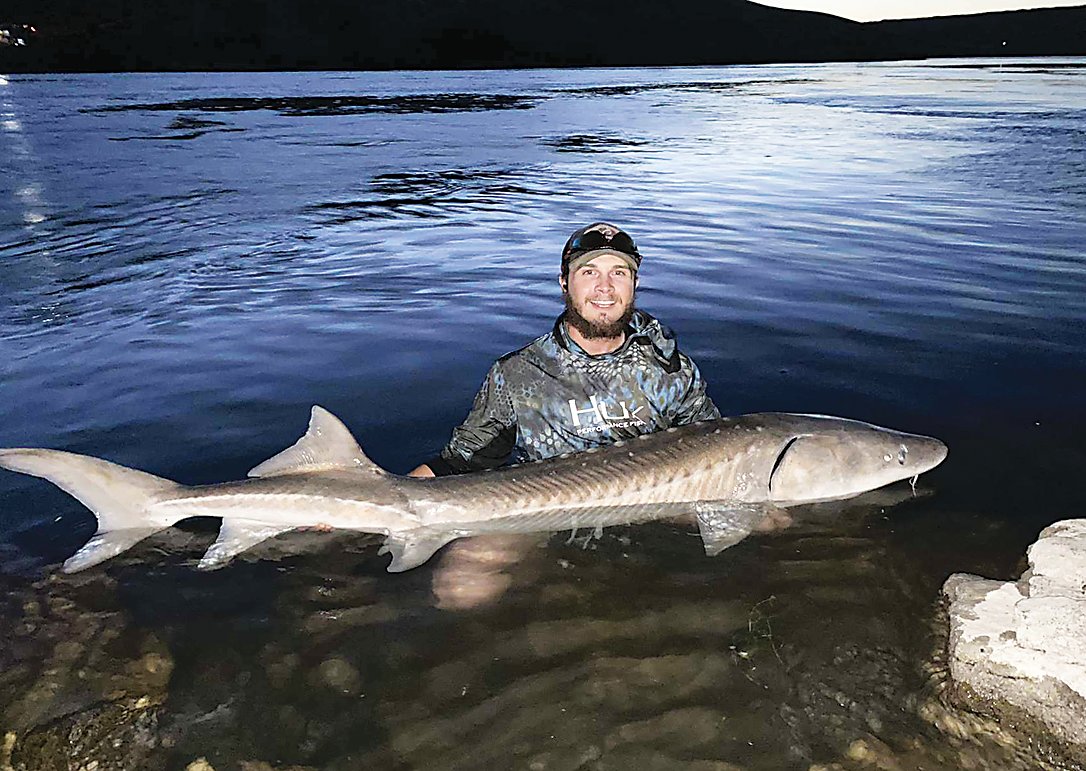 Contributed Photos Landing a White Sturgeon was a lifelong dream of Alec Milucky’s. Earlier this month it came true when he brought this 7-footer to shore, and then released it.
Contributed photos
Posted Tuesday, July 5, 2022 6:10 am
By Fred Stabbert III

STANLEY, IDAHO – When Alec Milucky signed up to work at the Sawtooth Fish Hatchery in Stanley, Idaho this summer, he also wanted to wet his line in the many great fishing spots out West.

“I’m taking a whole bunch of fishing stuff,” Milucky told the Democrat is an April interview. “Including my fly rod, spinning rods, and my father’s Flycraft Inflatable raft.

“I also brought a Sturgeon rod and hope to catch a White Sturgeon in the Snake River,” he said. “I would be happy with a five-footer, but they do get 10-feet long.”

Well, Milucky must be smiling from ear to ear as he recently landed a 7-foot Sturgeon and had the dramatic photo taken with the big fish before it was released back into the depths of the Snake River.

Milucky also wanted to do some trout fishing, and always had catching a Bull Trout on his bucket list.

He caught that just a few weeks after arriving out West while fishing with his buddy, who is in Idaho performing snorkeling fish surveys this summer.

Milucky is a student at SUNY Cobleskill in the Fisheries and Agriculture Dept.

His love of fishing was spawned from family trips to Black Lake, an upstate New York fishing mecca.

“It [fishing] really is my favorite thing to do,” Milucky said about fishing. “That’s why I’m going to school. I want to become a fisheries technician or I may be persuaded to get a Master’s and be a Fish Biologist.