WALLENPAUPACK – Even in the face of difficult losses, the Monticello saying, “it’s a great day to be a Panther,” holds true. For when it comes to Sullivan County boys … 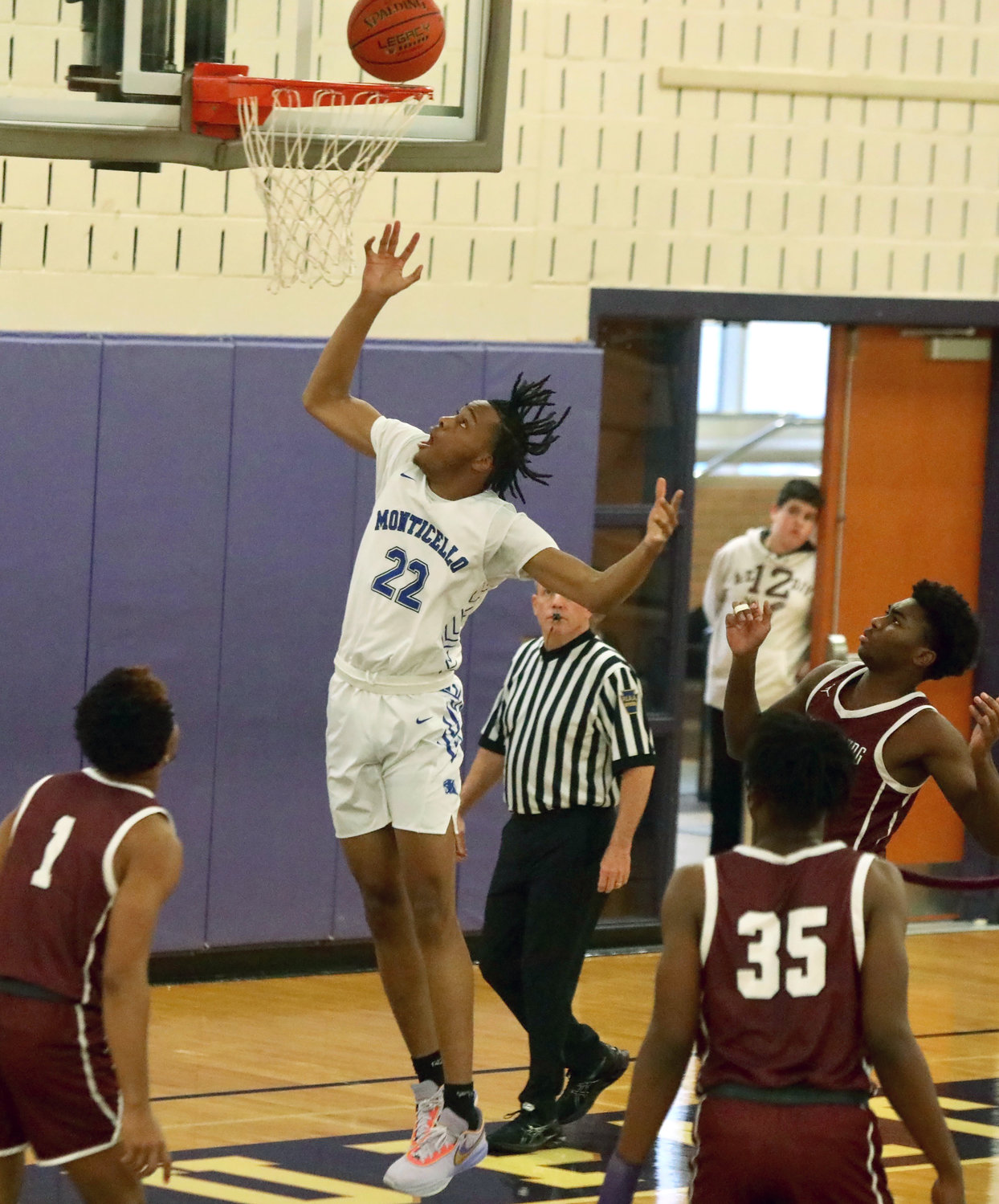 Monticello senior Dylan Hardy scores two of his eight points in the early going. Hardy drew six offensive charges over the course of the two games.
Richard A. Ross | Democrat 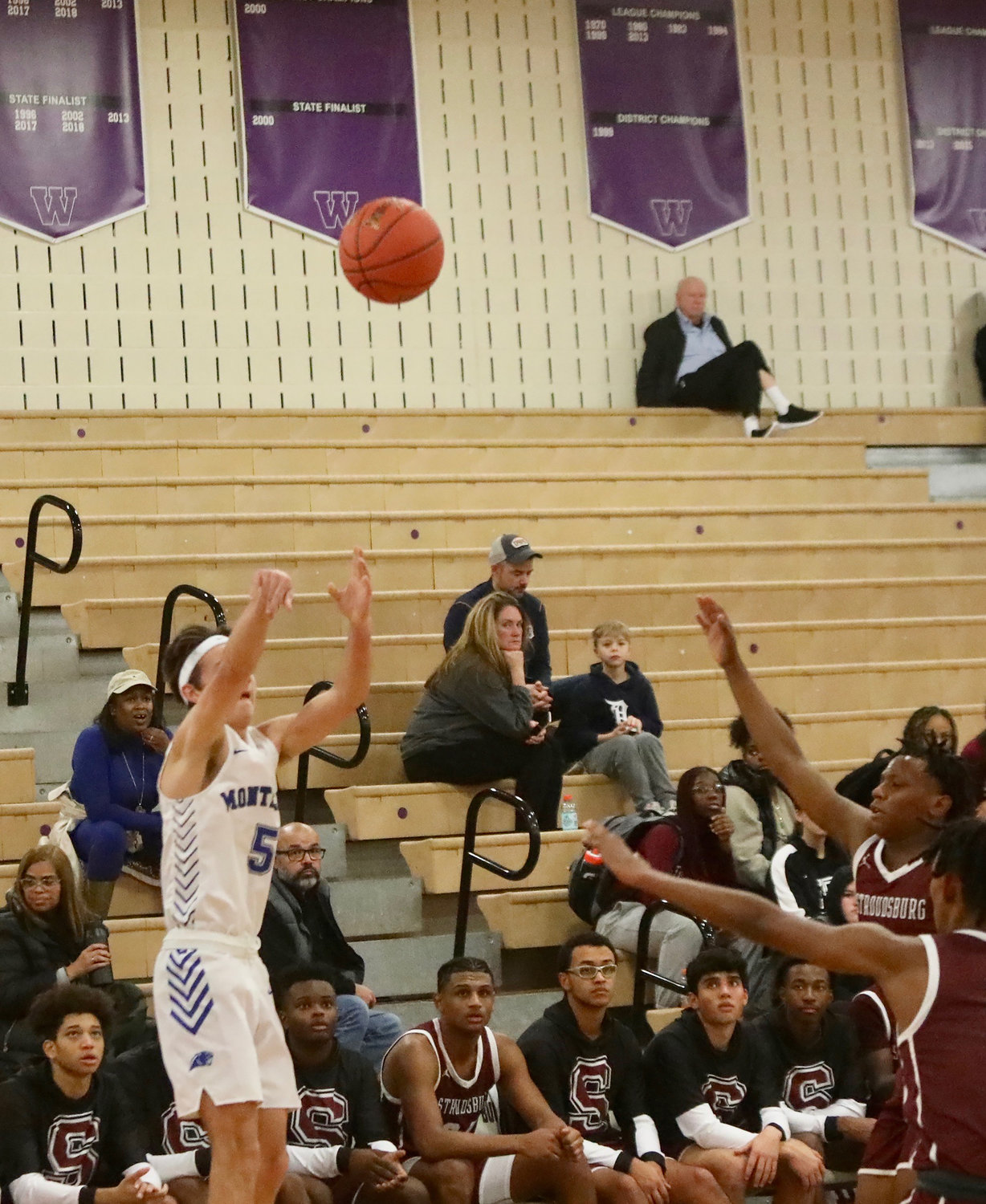 Monticello senior Joseph Russo launches one of his four treys in the game. Russo was chosen to the All-Tournament Team and led all scorers with 16 points.
Richard A. Ross | Democrat
Previous Next
Posted Tuesday, December 6, 2022 6:20 am
Richard A. Ross

WALLENPAUPACK – Even in the face of difficult losses, the Monticello saying, “it’s a great day to be a Panther,” holds true. For when it comes to Sullivan County boys basketball year in and year out, the Montis are top notch. Their patented style of play that defined their years of success under former coach Dick O’Neill has continued unabated under NYS Basketball’s Coach of the Year Chris Russo.

Each year the Montis open their season with an appearance in the Lake Region Tip-Off Classic at Wallenpaupack High School. The teams they contend against are often from much larger schools, and the Montis also must reckon with Pennsylvania’s bizarre no shot clock rule. Those two factors themselves make things challenging. Yet, even so, Monticello has won the tournament a number of times and emerged with a split decision on countless other occasions.

Last year was the first time the Panthers came home winless and this year it happened again by dint of a 50-37 opening night loss to the Wallenpaupack Buckhorns and a crushing 51-42 loss to the Stroudsburg Mountaineers in the Consolation game.

Coach Russo, now in his 15th season of coaching Monticello, a school district he has worked in for 21 years,  had this assessment of the opening night loss: “We were not good in the second quarter but played much better in the second half.”

The team’s performance in the second game showed a much greater intensity against a team that was athletic but often careless with the ball.

Monticello’s defensive pressure affected the Mountaineers who turned the ball over and missed shots right in the paint. Stroudsburg led 14-13 at the end of the first quarter. The two teams battled back and forth in what was becoming a very competitive game. The Panthers led 25-24 at the half after a six-point Monticello lead mostly evaporated via Stroudsburg tallies at the free throw line.

After the break Russo told his team, “We want to get three straight stops.” They did. The Montis got the bulk of their scoring from All-Tournament selection senior Joseph Russo who canned four treys in the game and led all scorers with 16 points. The Montis trailed 38-34 heading into the fourth quarter, but managed to briefly regain the lead by virtue of a Stroudsburg technical foul. Monti big man Dylan Hardy who had already taken six charges in the two games seemed to have taken another in the same fashion but was called instead for a blocking foul. That would have given the Montis possession with a lead.

The technical foul shots and the ensuing Stroudsburg possession gave the Mountaineers a lead which would be bolstered as the Panthers were forced to foul in a last-ditch effort to stop the clock.

Monticello did have three possessions as time was winding down but couldn’t convert on any of them.

Russo praised his team’s effort. “We didn’t play well in the first game but today was a completely different story. We amped up our defense and our offense was much more fluid.”

“We didn’t want to start 0-2, but we have something in the making here, some blocks to build on from this weekend.” Russo was effusive in his thanks to Wallenpaupack’s Ann Marie Simons, Jim McGinnis and all the people from Wallenpaupack. “They treat us so well every year,” he added.

Monticello takes on Fallsburg at 5:00 tonight at Sullivan County Community College just prior to the men’s and women’s college games. Then the Montis  (0-2), don’t play until their Jingle Ball Classic Tournament of December 18. The other teams in that tournament will be Wallkill, Chester and Burke.