William J. Pammer, Sr., passed away peacefully early Saturday morning, May 23, 2020. He was 90 years old. Bill was born on July 2, 1929 to immigrant parents, Joseph and Mary Pammer of Youngsville, … 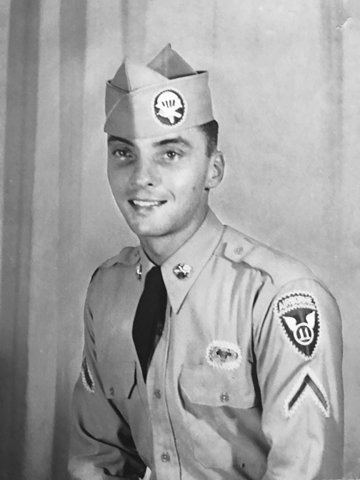 William J. Pammer, Sr., passed away peacefully early Saturday morning, May 23, 2020. He was 90 years old. Bill was born on July 2, 1929 to immigrant parents, Joseph and Mary Pammer of Youngsville, N.Y., and he was a first generation Austrian-American. Bill is a 1946 graduate of the former Youngsville High School. He was an outstanding athlete lettering in football, basketball, and baseball, and he was vice president of his senior class. He worked at the Youngsville creamery before accepting a position with the New York Telephone Company in 1948.

Inspired by friends who served gallantly in the airborne during World War II, Bill enlisted in the United States Army in February of 1951 and was deployed to jump school in Fort Campbell, Kentucky. He scored a 465 out of 500 points on the Basic Airborne Physical Fitness Test; the highest score for a recruit who was not a professional athlete. Upon graduating from jump school, he was assigned to I Company, 503rd Airborne Infantry Regiment (AIR), 11th Airborne Division. He served in an honor guard to receive General Douglas MacArthur after President Harry Truman relieved the general of his command in the Spring of 1951. In preparation for deployment to South Korea, Bill was dispatched to Big Delta, Alaska for arctic warfare and survival training until the Korean War ended in 1952.

Upon his honorable discharge in February of 1953, Bill returned to the New York Telephone Company as a lineman in the Construction Department. Shortly after his return, he met Alice Tierney. They married in May 1954. Bill's career at New York Bell/Verizon spanned 37 years before retiring in 1985. In the same month he retired from Verizon he was recruited by National Field Service (NFS) in Suffern, New York to oversee their account sales, which he did successfully until his second retirement in 2002.

Bill had an impeccable work ethic and a deep passion for his airborne reunions, gardening on his Holmes Road property, feeding his hummingbirds and deer hunting. He was a founding member of the Hagan Hunting Club, which he helped incorporate in 1961.

During his lifetime, Bill's wanderlust took him to Nova Scotia, New England, the Rocky Mountains, and Europe multiple times. Including a visit to Normandy for the 55th Anniversary of D-Day.

Bill was predeceased by his wife, Alice, and his sister, Betty Keeler. He is survived by his two sons, William J. Pammer, Jr. (Denise Frangipane) and James M. Pammer of Keene NH; seven grandchildren; and six great grandchildren.

In accordance with his wishes, cremation will take place in Milford, PA. He and Alice will be interred at a later time in the Veterans Cemetery in Liberty. Personal messages or condolences can be mailed to: Pammer Family, 668 West Shore Road, Swan Lake, New York 12783.

Arrangements are under the direction of the VanInwegen-Kenny, Inc. Funeral Home of Monticello NY; for additional information or to send an online condolence, please visit www.kennyfuneralhome.com.