No. 1-seeded Sullivan West hosts No. 4-Pawling in semifinal clash

LAKE HUNTINGTON –– To become the best, you’ve got to beat the best. That agenda resonates strongly in the minds of the players and coaches from Sullivan West and Pawling, two …

No. 1-seeded Sullivan West hosts No. 4-Pawling in semifinal clash 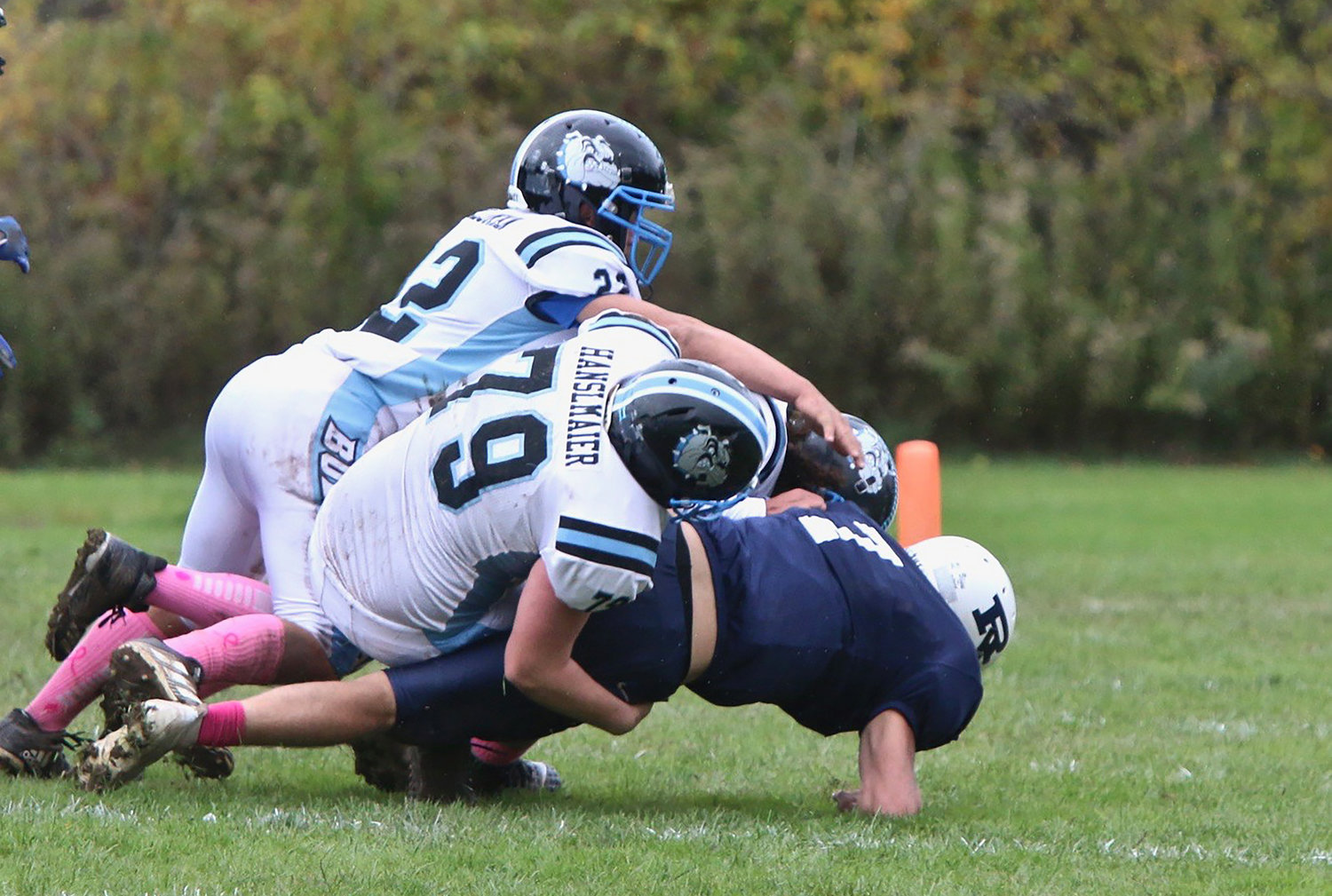 Defense will be key if the Bulldogs are going to prevail against Pawling. Good hard-hitting tackling like the kind evinced by junior Dillan Hanslmaier and sophomore Jakob Halloran was on display in this bone-crunching tackle of Roscoe junior Anthony Teipelke.
Richard A. Ross | Democrat 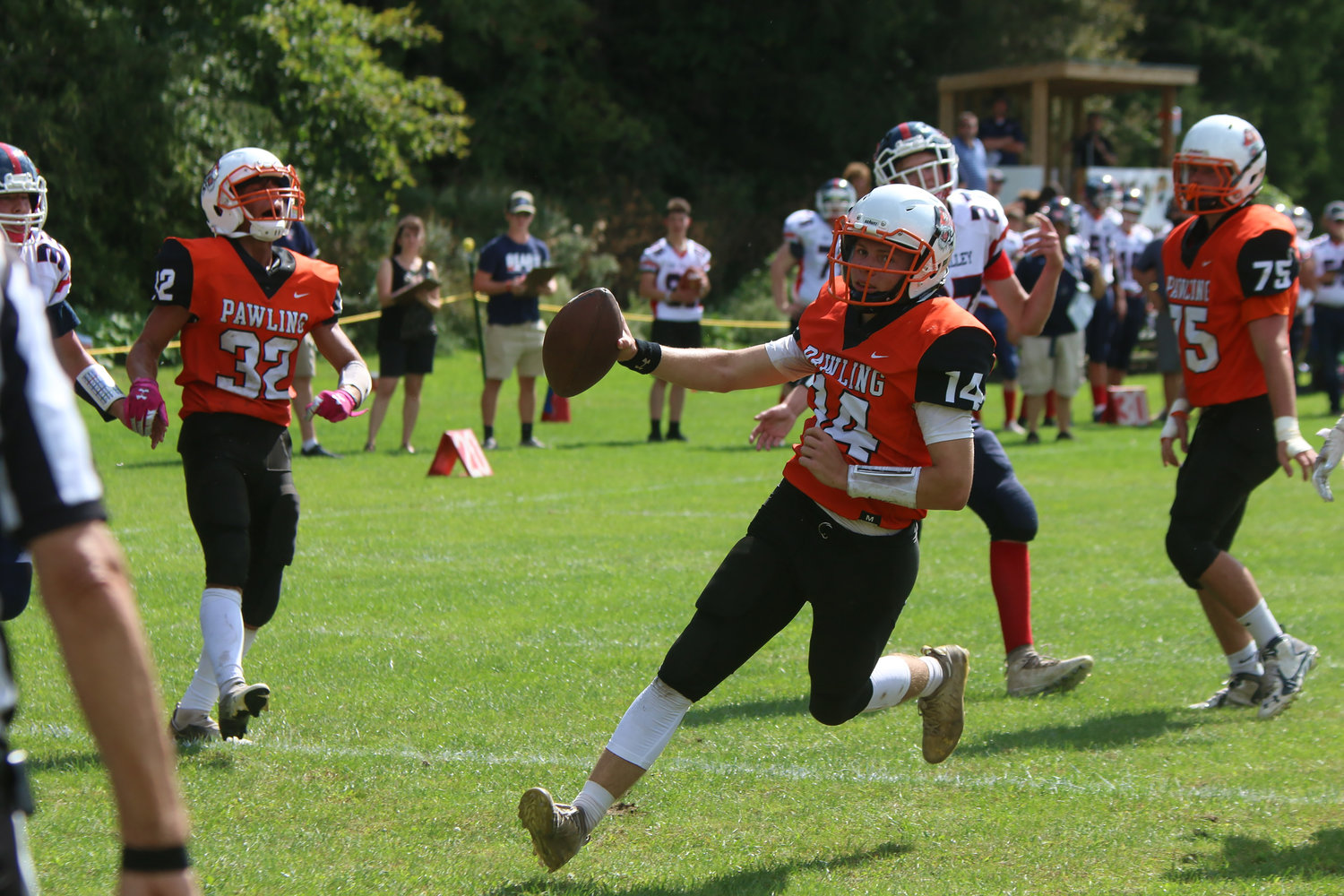 Pawling’s dynamic junior quarterback Will McCarthy will be trying to steer his No. 4- seeded Tigers team back to the title game as they visit No. 1- seeded Sullivan West in a much-anticipated clash. The winner will advance to the title game next week at Spackenkill vs. the winner of the Spackenkill-Roscoe semifinal.
Richard A. Ross | Democrat
Previous Next
Posted Friday, November 5, 2021 6:40 am
Richard A. Ross

LAKE HUNTINGTON –– To become the best, you’ve got to beat the best. That agenda resonates strongly in the minds of the players and coaches from Sullivan West and Pawling, two teams coming into the Eight-Man football semifinals with only one loss apiece and vying for a chance to advance to the title game against the winner of Spackenkill vs. Roscoe.

From the start of the season, Pawling has been favored by many to repeat as Section Nine, Eight-Man football champions. A surprising 50-44 loss to league rival Spackenkill on October 15 caused the Tigers to drop down to the four-seed in the playoffs but a 50-20 win over Ellenville in last week’s quarterfinal, the only team to beat Sullivan West this season, proved just how lethal Pawling is.

Speed kills and, with arguably the most dynamic quarterback in the eight-man array in junior Will McCarthy, the Bulldogs will be up against the best player they have seen this year. McCarthy put on a passing clinic in the Tigers’ 50-20 romp over Ellenville, finding his favorite target wideout, Alex Rida, often. McCarthy is also a big threat to run. The Tigers are a very speedy outfit. McCarthy is mobile in the pocket and has great field vision. Interestingly though, Pawling gave up over 200 yards of rushing to Ellenville big man Casimiro Pomales, something the Dawgs surely noted.

Earlier Pawling games against teams from this side of the river proved to be blowouts both versus Tri-Valley and Roscoe. Last year’s dominant title victory over Roscoe signaled the arrival at the zenith for Pawling. The Tigers aspire to retain that trophy. Pawling comes in at 6-1 with a number-three ranking in the state according to Max Preps and a No. 7 ranking according to the NYS Sportswriters Association. A matchup with Number-One playoff seeded 5-1 Sullivan West on the Bulldog’s field tonight should prove to be much-anticipated clash. The Bulldogs are an honorable mention in the NYSSWA rankings and are seventh in the state in the Max Preps list.

Their running game starts with senior Gavin Hauschild who has come into his own as a leader this year. Running is by committee with a cadre of fine carriers including Tarrell Spencer, Rally Cruz, Justin Grund and Jacob Hubert. Hauschild will look to throw this week to keep the Tigers from packing the box against the run. He has a number of potential receivers who can assist in that enterprise. Sullivan West’s imposing lineman Chris Campanelli will look to make an impact on both sides of the ball. Teams often double team him, which leaves openings for other players. The Bulldogs hope to have an advantage at the line of scrimmage as they clearly did two weeks ago against Roscoe. The bye week allowed them to get healthier and gave them more time to prepare for the Tigers’ incursion.

Whether those things factor in the Westies’ favor remains to be seen. If they can generate their potentially solid running attack, grind out yards, and move the chains, they will keep McCarthy from holding forth in his offensive bailiwick. The Dawgs’ pass defense, which has not really been tested much against teams that favor run-heavy offense, will be called upon to be alert and ready. The winner of the game will advance to the championship game on November 13 to be played at Spackenkill High School. The Spartans beat Roscoe earlier this year but suffered their only loss of the season to Sullivan West in Week One. They haven’t lost since. See next Tuesday’s issue of the Sullivan County Democrat for coverage of both games and a preview of the title game.