By 1966, as Sullivan County's Golden Age of tourism faded away, there were at least 20 year-around hotels in Sullivan and nearby Ulster County. And another expensive trend had developed: The indoor … 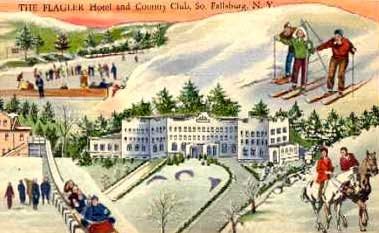 Sullivan County will likely always be noted as a summer resort, but winter activities at local hotels actually date back to the late 19th century. That's when the O&W Railway began advertising the area as a winter health resort, publishing its annual Winter Homes brochure in addition to the popular Summer Homes booklet.

In the 1920s, there were a handful of hotels that opened for specific holidays in the winter, such as Shindler's Prairie House in Hurleyville did for Washington's Birthday in 1926, when 40 guests enjoyed a day of winter fun before a tragic fire killed twelve persons in one of the most devastating fires in local history. That tragic incident did little to encourage hotels to extend their seasons.

By the 1930s, pioneering resorts such as the Flagler, the Laurels, Gibber's and Grossinger's were staying open all year around, offering guests sleigh rides, outdoor ice skating, skiing and tobogganing, as well as such indoor activities as contract bridge, ping pong, and dancing.

In 1940, the Flagler for example, was heralding in its ads, “In winter as in summer, it's the Flagler for fun and frolic,” while that same year the Laurels touted itself as “the smartest all-year-round playground in the Catskills for young folks.”

Although Gibber's was no longer advertising itself as a year-round resort in 1949, Fallsburg's Hotel Furst and River View Hotel were open all year, with the Hotel Furst advertising a new ice skating rink and “champion toboggan slide.”

Beginning in the 1950s, skiing became the principal winter attraction, and would dominate the cold weather sports scene in the southern Catskills throughout the remainder of the 20th century.

“Quite a few years ago, the Concord Hotel at near-by Kiamesha Lake, and Grossingger's, not far north along Route 17, decided that winter sports could be made into big business,” Michael Strauss wrote in a December 7, 1958 New York Times article with a Monticello dateline. “Each installed toboggan slides, artificial skating rinks, and modest rope tows to see how these would take with their guests. The projects succeeded immediately.”

By that time, the Town of Thompson had opened Holiday Mountain Ski Area, and skiing was no longer confined to the resorts. By 1960, Davos, near Woodridge, was in operation, and four of Sullivan County's ski areas were making artificial snow. Davos offered skiers three double chairlifts, a T-bar, and a rope tow. Five permanent and four portable compressors, fed by a large pond, provided the snow.

Despite the growing popularity of skiing, however, it was tobogganing that topped all other winter sports when Sullivan County resort operators conducted a survey of winter guest preferences in 1966.

“Artificial ice skating rinks and toboggan runs are the most popular attractions at the Sullivan- Ulster County resort hotels, according to a recent survey,” the Times reported on December 11 of that year. “The survey, conducted by the resort owners, sought to determine the popularity levels of skiing and other winter sports.”

According to the poll, about one-third of the winter visitors listed the artificial skating rinks as their favorite facility, while 50 per cent of those surveyed preferred tobogganing.

“Skiing is the undisputed leader among the younger visitors,” the Times noted. “Among the older guests, there undoubtedly is a feeling that tobogganing and ice skating are safer than skiing.”

“Among the area hotels offering skiing, ice skating, and indoor swimming on or close to the main grounds are the Concord, Gibber's, Grossinger's, Laurels, the Raleigh, the Pines, Kutsher's, Homowack, the Granit, the Nelvele, the Fallsview, and Young's Gap,” the Times reported in December of 1966. “Other resorts that aim for the skiing crowd in particular include Avon Lodge, the Columbia Hotel, Davos, and Mount Cathalia.”

A few of my favorite things and more