For two years now, my mother has participated in the Gorzynski Farm CSA which provides a bountiful assortment of fresh vegetables every week from June to October. With my youngest sibling in college, …

Cooking in the Country 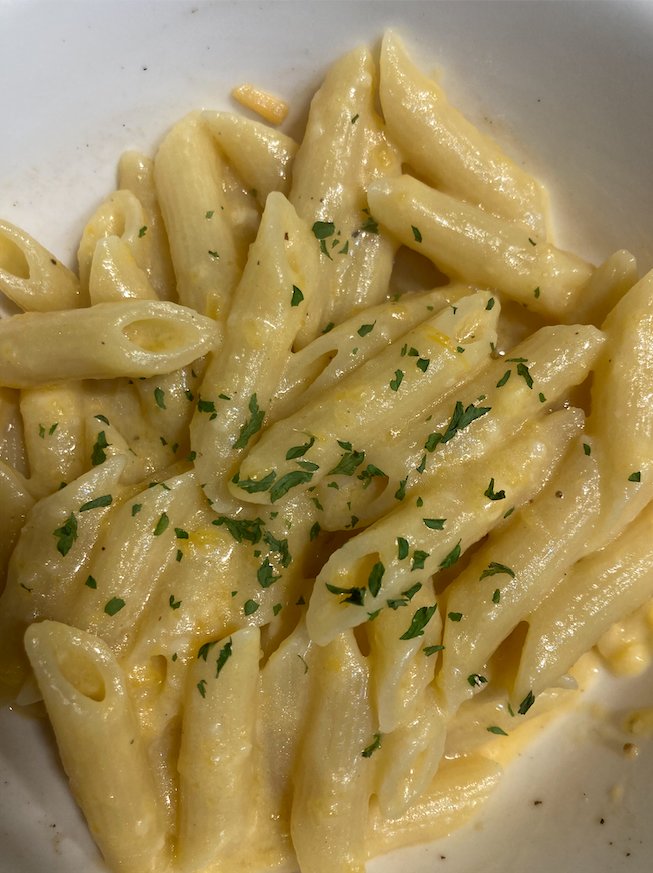 When I stumbled upon a way to sneak a vegetable into a mac and cheese recipe I knew I had to try it.
Contributed Photo by Charlotte Schwartz
Posted Friday, November 5, 2021 7:00 am
Charlotte Schwartz

For two years now, my mother has participated in the Gorzynski Farm CSA which provides a bountiful assortment of fresh vegetables every week from June to October. With my youngest sibling in college, the weekly produce can be a lot for two people so I happily accept some of what’s in the big blue bag in the Fall. Last week, I had kale (my favorite), tatsoi (which I used in a stir-fry), and a large winter squash. Unsure of how to use the squash, I cut and de-seeded it then baked it in the oven until tender. I removed the skin and pureed the interior in a blender, thinking that I could store it in the freezer and use it as needed. My kids have been picky at dinnertime lately, ignoring foods they used to enjoy, so when I stumbled upon a way to sneak a vegetable into a mac and cheese recipe I knew I had to try it and we were so happy with the results! The squash adds to the creamy texture of the sauce and a depth in flavor you don’t normally get in traditional cheesy pasta recipes. This meal came together on a weeknight in less than 30 minutes and is fairly versatile. I used penne instead of macaroni pasta because it was all I had on hand and would also go well with add-ins like cubed ham, cooked broccoli, or sauteed onion. Ingredients 2 tablespoons butter 3 cloves garlic, minced 2 tablespoons flour 1 ½ cup chicken broth 1 ½ cup milk 1 cup cooked winter squash, pureed ¼ cup Parmesan cheese 1 cup shredded sharp cheddar cheese 1 box pasta Salt and pepper, to taste Parsley, to garnish Directions Prepare pasta in a pot of boiling water, according to package directions. While the pasta is cooking, melt the butter in a medium saucepan. Add the garlic and cook until browned, about 2 minutes. Add the flour and stir with a fork to combine. Once the roux has begun to thicken and bubble, add the broth, milk, and squash. Stir occasionally until the sauce begins to thicken, about 3-5 minutes. Add both cheeses to the mixture and season with salt and pepper. Cook until cheese is melted. Drain the pasta and pour the cheese sauce over the pasta. Stir to combine. Garnish with parsley and serve.