Winter track earns its name: Indoor meets will be staged outside

SULLIVAN COUNTY -- Whoever had the idea that indoor track could be staged in the midst of a pandemic must have been living in an alternative universe. The prospect of mass indoor gatherings of …

Winter track earns its name: Indoor meets will be staged outside 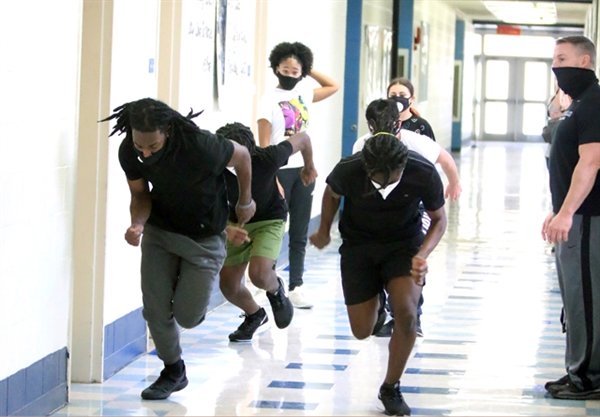 SULLIVAN COUNTY -- Whoever had the idea that indoor track could be staged in the midst of a pandemic must have been living in an alternative universe. The prospect of mass indoor gatherings of runners, jumpers and throwers amidst the contagion was never even a remote possibility.

Nevertheless the sport was grouped in the low/moderate category and the season was slated to unfold…that is except for one minor detail. There were no indoor venues to run meets in. West Point nixed Gillis Field House. Sullivan County Community College nixed Paul Gerry Field House and now the Armory has cancelled the indoor season as the venue is being used as a vaccination center. Enter old man winter to save the day. That's right, indoor track has become outdoor track in the zany age of COVID-19.

To wit, there will be a number of outdoor meets involving our schools, weather permitting of course. For anyone willing to bet on docile weather in Sullivan County in the coming weeks, I have a bridge to sell you. Anyway, with the authorized startup of practices this past week winter track teams are now in various degrees of preparation.

“It's tough,” said Buddenhagen, “we're not getting all of the kids out yet. Since they're not in school we have to rely on Twitter and Teamz to communicate with them. Also some parents aren't comfortable yet with sending their kids. We're doing the best we can but it's kind of crazy. We have a meet scheduled for Saturday and there is no telling what the weather will be or the condition of the track (snow would be a problem).”

Nevertheless the kids at practice seemed enthusiastic and glad to be there. “Kids want to compete,” said Buddenhagen.

Clearly jumping events with the exception of the high jump are out of the question. Up in the fitness center assistant coach Ariel Batis had her distance runners on the treadmill. Distance coach Rick Sternkopf was not on hand that day and Batis took over this group. She helps out with both sprinters and distance runners.

“Some days when it's not too cold we'll have them run outside,” she noted. “We use the elliptical, weight training and then do a cooldown. “

At Tri-Valley, Coach Chip Furman summed up the first week. “Practice is going well,” he said. “We have 16 Varsity Boy Athletes and six Varsity Girl Athletes attending. There are a number of new athletes to the track and field program who participated in other sports in the past, and we are happy to have them! Our track competition schedule includes several meets tentatively scheduled to begin on February 6, 2021. This schedule includes meets against Liberty, Sullivan West, Burke, Port Jervis, Rondout Valley and Minisink Valley.

“Distance runners are with me doing long runs on the roads and speed workouts on the track,” Furman continued. “Coach Tyler Eckoff is working with the sprinters/jumpers at the track and weight room. Coach Kate Cutler is working with the throwers on form drills and weightlifting, all while adhering to the COVID-19 rules set forth by the school administration.”

At Sullivan West Coach Joe Seidl noted, “The first week of practice has been a challenge as we adapt to mandated safety protocols. We have about 25-30 athletes on the team this year, girls/boys combined. It has been great seeing the kids active again in Track and Field after months of waiting for interscholastic athletics to begin again. Although this group of athletes is much smaller and younger than recent Sullivan West teams, I have been very impressed by the positive attitude and enthusiasm displayed at practice this week.”

“With such a limited amount of time to train and prepare for competition we are approaching the upcoming non-scored meet at Port Jervis and overall season much differently,” said Seidl. “The focus is less on competition and more on individual improvement and conditioning, in preparation for the upcoming sport seasons this Spring. To be honest, I think everyone is just happy to be out of the house and active again!”

At Liberty Coach Ralph Bressler had this to say about the difficulties of the staging of the sport this winter: “There is no indoor practice as there is no indoor track this year. I have six boys and one girl and we are practicing outside by running the parking lots. I am hoping for a few more athletes but it is difficult given the conditions. The grounds crew is trying to clear the track but it will be difficult given the pack of snow and ice. On February 6, we have a home meet against Monticello. We wear masks all the time and stay at least six feet apart. We will be competing primarily in flat running events as that is all I feel is safe.”

Eldred Coaches Don and Lisa Drewett noted, “Our current plan is to conduct practices four days a week. This schedule started on January 19. Our school has broken the students in A, B, and C groups. The latter are students who attend school both weeks (the other are alternating weeks). This coming week we will repeat our practices for the following group. Since we are following the strict CDC as well as the NYS guidelines, keeping everyone safe is the main priority.

“To that end we were lucky to take advantage of a clear track and get in some good work while the weather cooperated,” said the Drewetts. “We will continue to strive towards ambitious goals of the league and the Section and remain flexible in the hopes that we can once again compete. A highlight is watching everyone so motivated even though that means sanitizing our shot put. Seniors Matt Dutcher and Bodin Stutz are focused on their goal of breaking the school record that been around since 2003.”