Our rivers and streams have been low, despite the rain showers we received over the weekend. On Monday morning, June 14, 2021, the Beaverkill at Cooks Falls was flowing at just 213 cubic feet per … 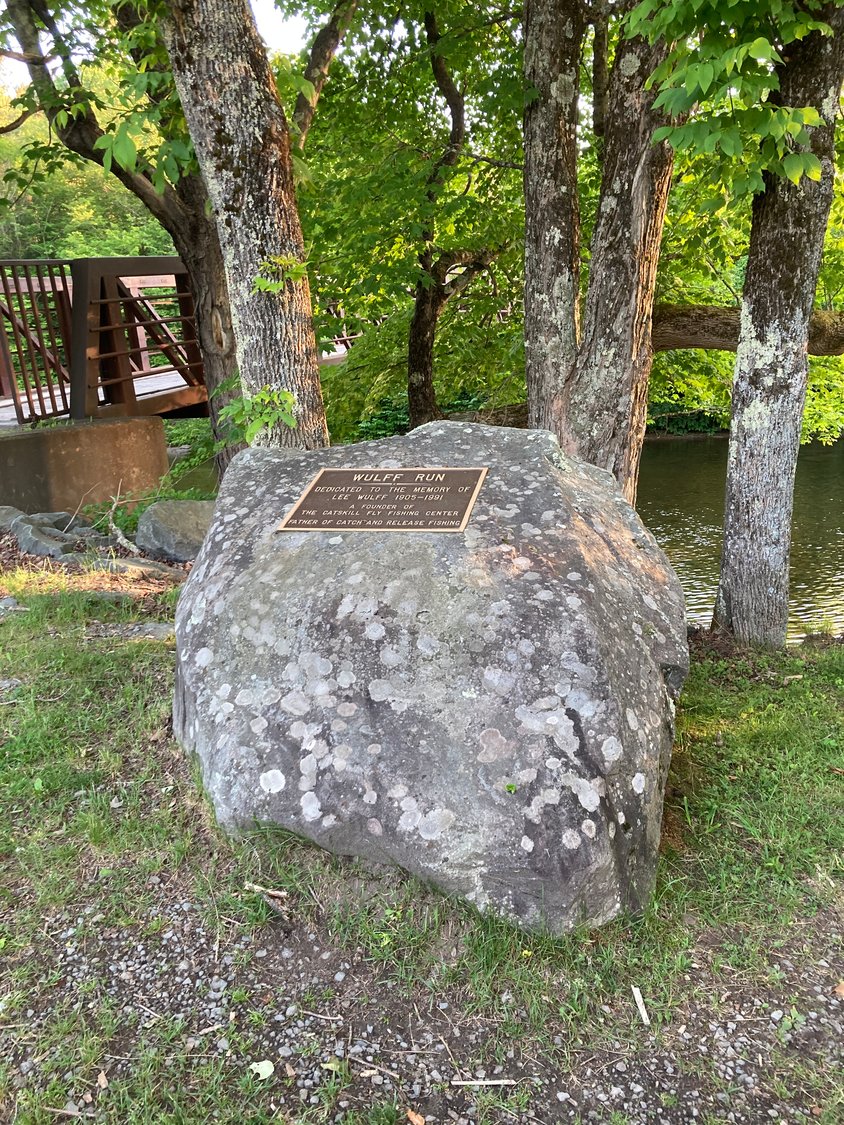 The rock denoting Wulff Run on the Willowemoc is just downstream of the bridge leading to the CFFC&M. Name plates of those who donated toward the purchase of the bridge are affixed to the steel arches.
Photo by Judy Van Put
Posted Tuesday, June 15, 2021 7:00 am
Judy Van Put

Our rivers and streams have been low, despite the rain showers we received over the weekend. On Monday morning, June 14, 2021, the Beaverkill at Cooks Falls was flowing at just 213 cubic feet per second, which is below the average (mean) flow on this date of 455 cfs over 106 years of record-keeping. Water temperatures have been favorable, except for last Thursday when they reached into the 70s, but the cooler evenings have helped keep water temperatures down into the 60s.

We wanted to try our luck on the Willowemoc after dinner and stopped in front of the Catskill Fly Fishing Center near a stretch of water we pass almost every day but haven’t fished in years. The creek was low and very slow moving and the water appeared almost pond-like, but we could see a few sporadic rises all the way down the run, and we decided to stay. Ed fished from the right bank, which was steeper and more difficult to maneuver with large rocks laid up along the water’s edge, but he waded right out after a rising fish that was soon landed in his net – a decent-sized hatchery brown trout.

I took my time and walked upstream past the large boulder with the metal plaque commemorating Lee Wulff and that stretch of water, Wulff Run, and crossed the steel arch bridge over the Willowemoc to fish the opposite side. As I walked along the wooden planks I took note of the name plates across both arches, and it brought back memories of thirty-some years ago, when fundraisers were held to help purchase the bridge, as well as to finance the “new” museum building at the Catskill Fly Fishing Center. At the time, bridge supporters donated $500 towards the purchase, and each had a metal plaque engraved with their name placed on the arches of the bridge, which was brought here in 1984, at about the same time President Jimmy Carter paid a five-day visit to help fundraise for the new museum and fish our Catskill waters.

After crossing, I entered the nature trail which follows the left bank of the creek and winds through towering vegetation. A couple of memorial benches along the side of the trail provide a welcome seat for those who might stop to watch for hatches, tie on a new leader, or observe rising fish. I waded into the stream and noticed a few well-spaced small rises, though no flies, and tied a size #16 Adams onto the end of my tippet. Ed had netted yet another trout (he said afterward that he was fishing with a Red Midge) and I had missed a couple of tiny takes.

I noticed what appeared to be a better rise and cast my fly over, and the fish took. I set the hook and reeled in, much to my surprise, an 8-inch wild brook trout! The presence of the brook trout bodes well for this section of the Willowemoc, as brook trout choose to live in only the coldest, cleanest, most well-oxygenated waters. The nearest tributary it could have been recruited from was some distance away – confirming that it has probably been residing in Wulff Run.

The colors of the trout were strikingly beautiful, and brought to mind the description so thoughtfully written by the naturalist John Burroughs in his book “In The Catskills,” describing his catch of brook trout from a fishing trip: “It pleased my eye so, that I would fain linger over them, arranging them in rows and studying the various hues and tints. They were nearly a uniform of size, rarely one over ten or under eight inches in length, and it seemed as if the hues of all the precious metals and stones were reflected from their sides.”

At twilight, that magical time between daylight and darkness, a gaggle of geese flew over heading upstream, their plaintive honks punctuating the sweet chorus of songbirds bidding goodnight. I could hear the far-off voices of children laughing and playing, and the bark of a lone dog, and felt content, thinking how pleasant it was to be standing here in the cool waters of the Willowemoc on a warm June evening.