LIBERTY -- It was a beautiful, overcast fall afternoon as undefeated Dominick's faced off against the two-loss Young Gunz in a pivotal game in the Liberty Men's Softball League on Sunday.

Take me to the top 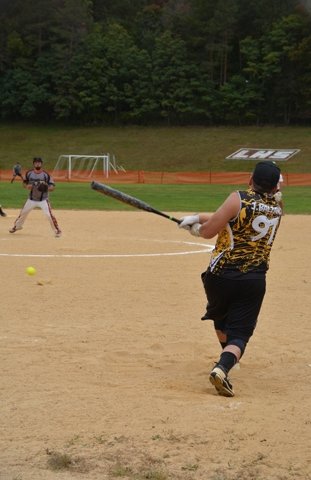 Jordan Balzano had two hits and an RBI for Dominick's in Sunday's contest vs the Young Gunz.
JOSEPH ABRAHAM | DEMOCRAT 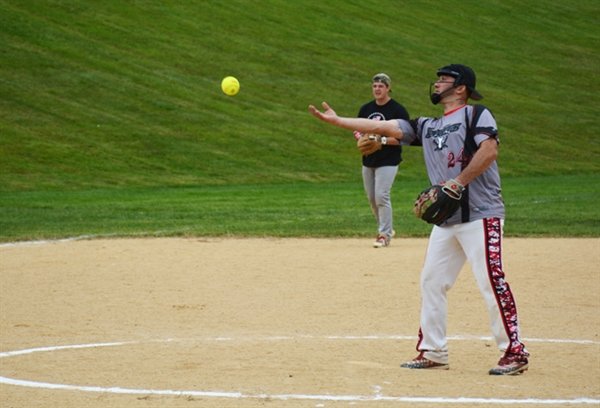 Jon Hinkley was the starting pitcher for the Young Gunz in Sunday's showdown with Dominick's, but he had an even bigger impact offensively, hitting a pair of home runs.
JOSEPH ABRAHAM | DEMOCRAT 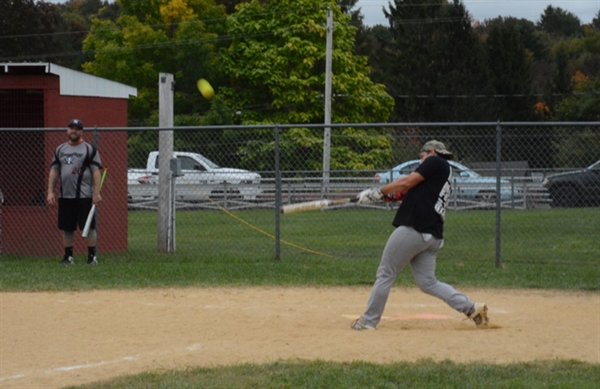 LIBERTY -- It was a beautiful, overcast fall afternoon as undefeated Dominick's faced off against the two-loss Young Gunz in a pivotal game in the Liberty Men's Softball League on Sunday.

While it looked like Dominick's would cruise to yet another victory, a Young Gunz' seven-run rally in the sixth inning turned the tide of a game they'd win, 22-21, handing their opponents their first loss of the season.

“It was pretty crucial,” Kushetsky said of the win. “Rallying back at the end was big for us.”

The Young Gunz were short handed in both their contests that day, playing with only nine guys.

They had a double digit lead in their first game against Jaglife Outdoors, but their opponents had a big sixth inning, scoring 15 and earning the victory.

But here's how the game between the Young Gunz and Dominick's went down.

Both teams were tied one all after the first inning of play, but a Dominicks' second inning burst of offense saw them jump out to a 6-1 lead heading into the bottom of the second.

The Young Gunz responded as Jon Hinkley crushed a grand slam to cut the deficit to 6-5.

The Dominicks' defense held the Young Gunz scoreless in the third. This came after tacking on two more runs to cushion their lead to 8-5.

Things looked bleak for the Young Gunz following a 10-run bottom of the fourth for Dominick's, putting them up 18-5.

However, home runs by Blume, Ter Bush and Hinkley, cut the Dominicks' lead to 18-13 after four.

Dominick's responded by adding three runs in the fifth inning and held the Young Gunz scoreless, up eight heading into crunch time.

The Young Gunz came through with a huge defensive stand in the sixth, and exploded for seven runs, trailing by one heading into the final inning. And as we know, that positive momentum continued with them scoring two runs and winning the game.

Dominick's remains in first place with a 7-1 record, with Heavy Hitters and Young Gunz right behind them with 5-2 records. T & T is currently in fourth place with a 5-3 record.

When asked how the Young Gunz maintained their composure despite dropping the first game of the day and facing a large deficit to Dominick's, Kushetsky said, “We, as a team, know when we need to come together. The loss didn't bother us. We know what we needed to do and bounced back, putting hits together.”

Young Gunz has three games remaining and they have no plans of slowing down.

“We know when it comes playoff time, that's crunch time and we'll do our very best,” said Kushetsky. “Hopefully we win our next three and carry it into the next run [postseason].”