YOUNGSVILLE – Cornhole has become one of the most popular indoor-outdoor games in the United States, and that was very evident on Saturday, April 23 when the Youngsville Fire Department hosted … 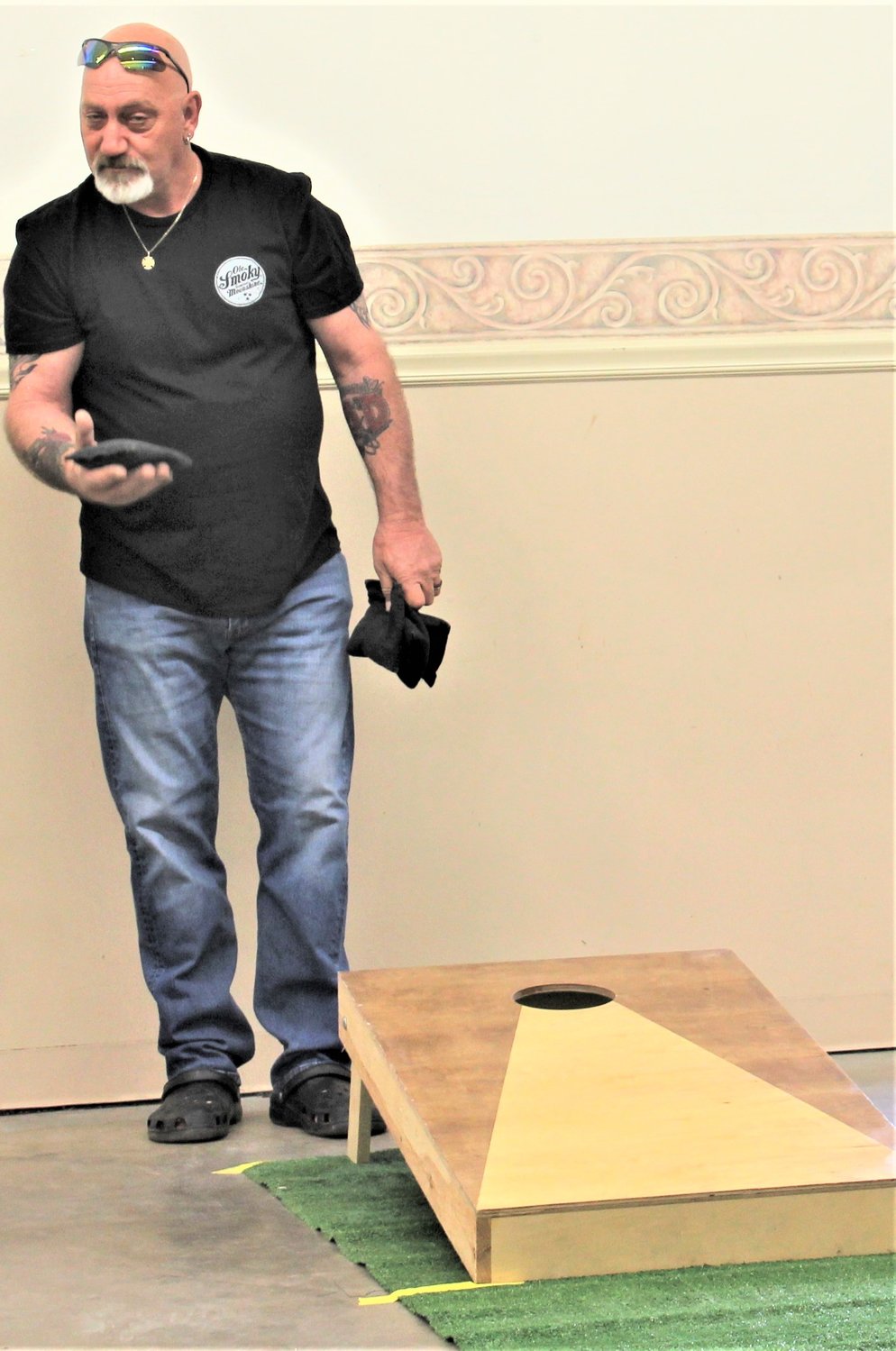 Youngsville Classic Cornhole player Donnie Corbett displays good form prior to releasing the Cornhole bag being held in his right hand. To his left is the standard cornhole target board.
Ed Townsend | Democrat 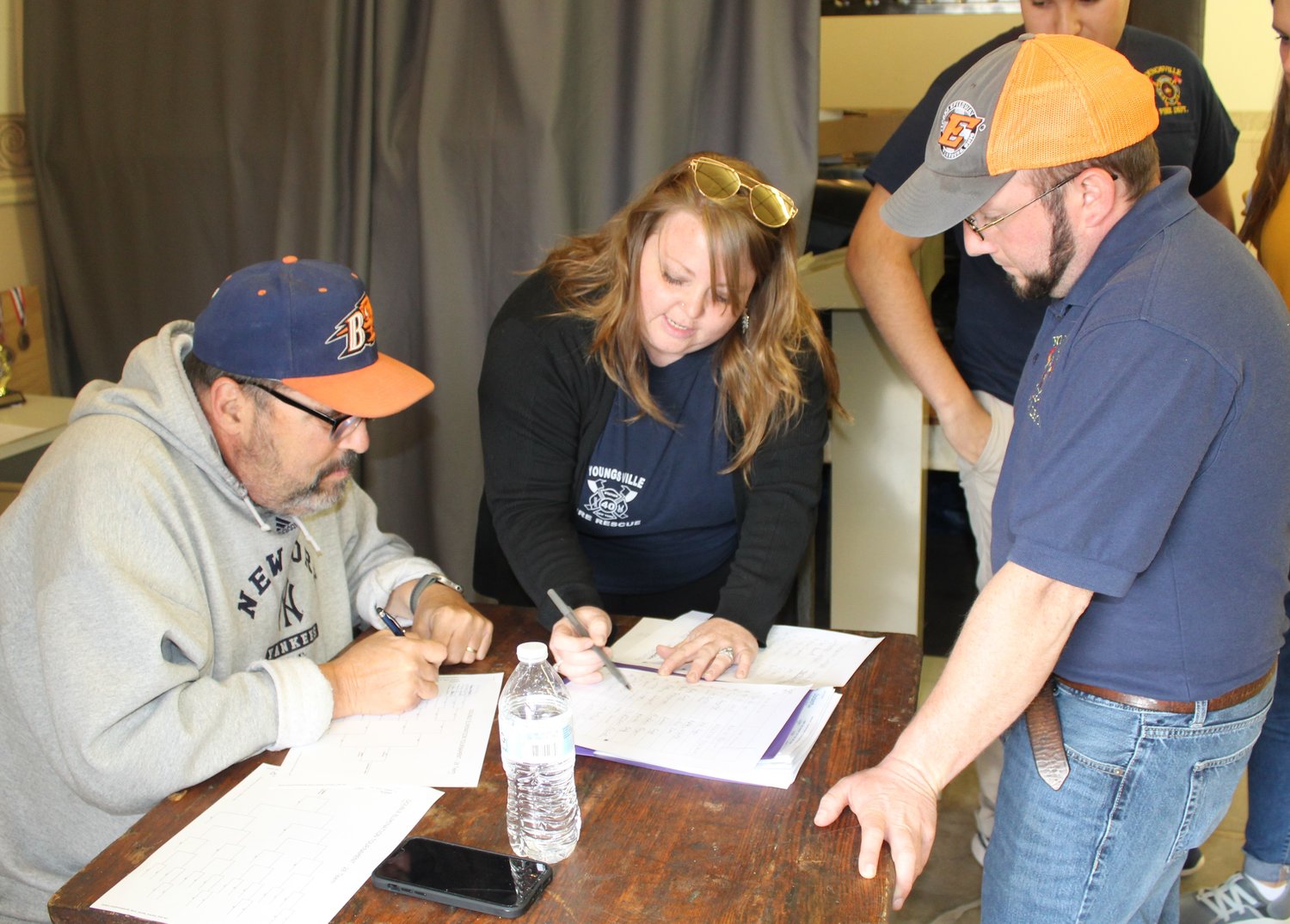 Behind the scenes of every successful event are volunteers who helped with the Youngsville Fire Department Cornhole Classic Tournament. They are, from the left, Rick Ellison, keeping the stats, Amber Creegan, helping with stats and Jonathan McGibbon, one of the tournament organizers.
Ed Townsend | Democrat 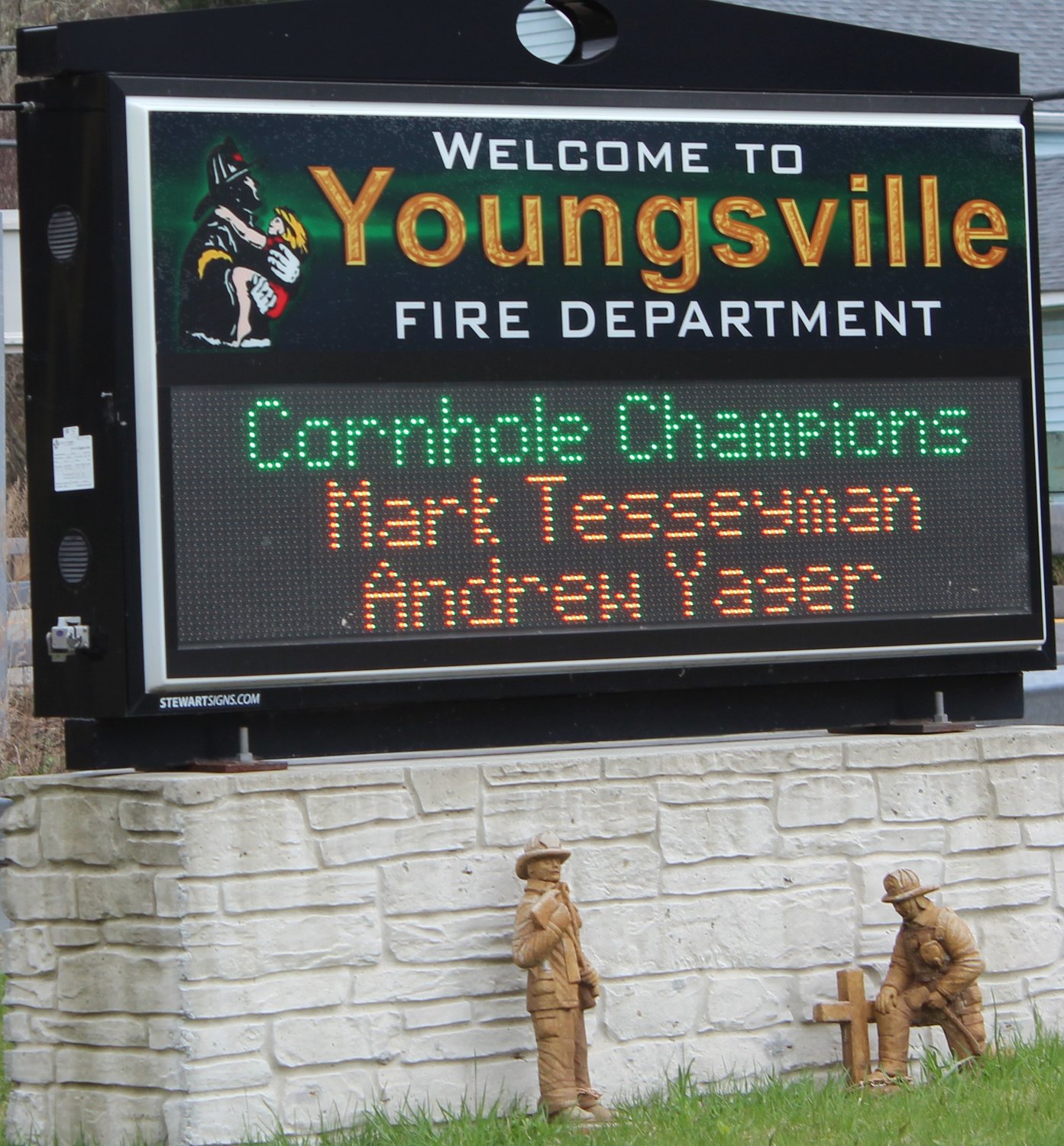 No sooner had the official winners of the Youngsville Fire Department Cornhole Classic been announced, the champions’ names were flashing on the outdoor department bulletin board located near Route 52.
Ed Townsend | Democrat
Previous Next
Posted Tuesday, May 10, 2022 6:20 am
Ed Townsend

YOUNGSVILLE – Cornhole has become one of the most popular indoor-outdoor games in the United States, and that was very evident on Saturday, April 23 when the Youngsville Fire Department hosted 28 teams in their social hall for the Cornhole Classic.

Cornhole now has become a professional sport with a league, and ESPN now hosts televised matches.

Several years ago, before Covid-19, the Liberty Elks and the Youngsville Fire Department held tournaments, and it was evident that the sport was popular and growing.

The April 23 Youngsville Classic was organized by a committee of firemen headed by Jonathan McGibbon who noted the department was overly pleased by the huge turnout. The tournament featured 27 two-person teams both men and men and men and women in a double elimination format.

The tournament displayed a very high competitive level, and indications are that there will be other tournaments announced in the near future.

Players noted that they watch others, and develop a throwing style they are comfortable with and one that produces the best scores.

The very active tournament players noted that some tournaments allow players to use their own two-sided Pro-level beanbags that feature Duck Cloth on one side so the bag can slide and Premium Suede on the other side when players want the bag to stick.

The popularity of this game has made it now known as a professional sport with a league, the American Cornhole League (ACL), and now has a TV contract with ESPN and prime money up to $1 million.

The man behind the business of cornhole is ACL CEO Stacey Moore, who honed his cornhole game at North Carolina State football tailgates where he created different types of brands to try and figure out how to capitalize on the tailgating lifestyle.

Sausage company, Johnsonville, served as the primary sponsor of the ACL and expansion plans call for the taking of the league to Canada, Australia, Sweden, Germany and Japan via the World Cornhole League.

There previously has been some talk of forming a local league in Sullivan, Orange and Ulster Counties.