When the American Civil War broke out in 1861, the population of Sullivan County was more than 32,000, but there were just a handful of African Americans here. Despite their scarcity, they were well … 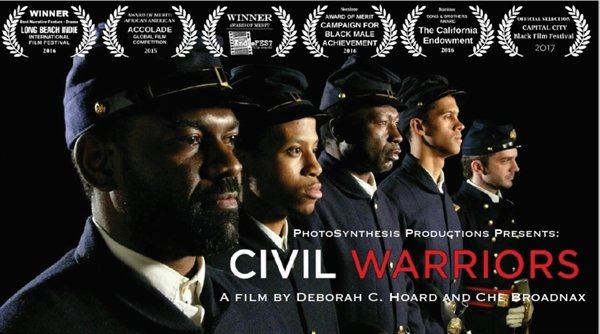 The award-winning 2016 film, "Civil Warriors" is about the 26th U.S.C.T, in which a number of Sullivan County soldiers enlisted.
Posted Friday, February 5, 2021 12:00 am
John Conway - Sullivan County Historian

When the American Civil War broke out in 1861, the population of Sullivan County was more than 32,000, but there were just a handful of African Americans here. Despite their scarcity, they were well represented in the war.

Although African Americans from Sullivan County fought with a number of units, including the 20th U.S. Colored Troops, the 26th U.S.C.T. and the 37th U.S.C.T., the largest number were with the 26th.

The town of Mamakating had more African Americans fight in the Civil War than any of the 14 towns that made up Sullivan County at the time. Wurtsboro brothers Henry Clay Jackson and Daniel Stanton Jackson enlisted in the 26th. (Another brother, Eli Bennett Jackson, fought with the 20th U.S.C.T.) Mamakating residents John Low and Charles Jarvis were also members of the 26th, as were James Garnett, Judson Sharpe and William Neal of Cochecton, and Theodore Cotton of Barryville.

Relatively little is known about these men, although research into their lives—in an out of the service—is continuing. While the accomplishments of individual soldiers has proven difficult to track down, the 26th U.S.C.T has become more well-known than almost any other African American regiment.

Some of that is because of the 2016 award-winning film, “Civil Warriors.”

The film focuses on the experiences of two black families from Tompkins County, New York, who have fathers and sons enlisted in the 26th, and according to the movie's website, “their compelling true story unfolds through a unique interweaving of historical images with the rhythm and energy of spoken word performance. Contemporary narration guides us and provides historical context as the story unfolds.”

“The men in ‘Civil Warriors' stood up to fight for freedoms they barely had,” publicity for the film notes. “They stood up to be counted as men in a country that called them ‘boy.' They fought and died, but their stories go largely untold. The film is not only about individual men, but also about all of the soldiers who fought in the USCT; it is a history of black people as active agents in their own struggle -- as subjects, not objects of the Civil War. Their stories need to be told, not only in order to reclaim their rightful place in the shared history of our nation, but also to remind us that we need to participate and remain vigilant in the ongoing struggle for racial justice in our society.”

Although not specifically a subject of the film, Sullivan County soldier Theodore Cotton's history with the 26th reads like a movie script.

In the summer of 1864, the regiment stormed the Confederate position at John's Island in South Carolina. According to Fred Fries of the Sullivan County Historical Society, who has researched Cotton's military record, “the 26th broke through the works, scattering its defenders. [Its] push was stalled, however, when fresh Southern reinforcements passed through the retreating Confederates, driving the Union regiment back over the recently captured works and inflicting heavy casualties.

“The final report submitted by Union officers outlining the battle of John's Island and the resulting casualties, listed Theodore Cotton, who did not return from the 26th's advance and retreat, among those who were killed in action. His personal effects were then sent to the Adjutant General's Office to be sent home.”

But Theodore Cotton had survived.

“He had wounds inflicted on his right leg during the heavy fighting,” Fries writes. “Unable to retreat with his regiment after being overwhelmed by the Rebel counterattack, he was taken prisoner.”

He was a prisoner of war throughout the remainder of the conflict.

Cotton was part of a prisoner exchange with the Confederates on March 4, 1865. His leg wound remained serious, however, and his right leg was eventually amputated, Fries says, adding that Cotton was discharged because of the surgery.

Theodore Cotton returned to the five-acre residence on Mail Road in Barryville he had purchased during the spring of 1862, reuniting with his wife, Eliza, and their six children. The Federal census for 1880 lists Theodore, along with his son Phineas, as stone masons.

Theodore Cotton died in 1885. The Mail Road property remained in the family until 1935, when his last surviving daughter sold it.

Jacobowitz and Gubits recognized by Sullivan County Chamber of Commerce as 2021 Business of the Year
WALDEN, N.Y. - The law firm of Jacobowitz and Gubits, LLP (J&G) was named 2021 Business of the Year by the Sullivan County Chamber of Commerce. The firm received this award on November 10, 2021 …
If you’re struggling with paying bills on your home, there is help coming
MONTICELLO – Sullivan County Treasurer Nancy Buck wants local homeowners to know they may qualify for State assistance in paying delinquent taxes and other charges.“My office has recently …