Early in November of 1918, a transport ship left New York City bound for France, loaded with soldiers headed to the great war. A few days later, peace was declared—at the 11th hour of the 11th … 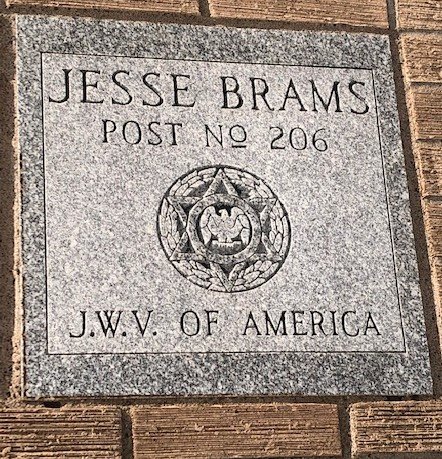 Early in November of 1918, a transport ship left New York City bound for France, loaded with soldiers headed to the great war. A few days later, peace was declared—at the 11th hour of the 11th day of the 11th month-- and the ship returned to port without ever entering the fray.

Among the soldiers on that transport was a 21-year-old mechanical engineer from Monticello, Jesse Brams, a member of a heavy artillery unit, who would spend the next several weeks stateside before being honorably discharged in December.

Brams had been born in Chicago on July 9, 1897 to Samuel and Annie Monk Brams. He attended school in Bushwick before graduating Monticello High School and Pratt Institute, earning a mechanical engineering degree. Back in Monticello after the war, he assisted his parents in operating their hotel, the Pine Lodge, and became an active member of the Monticello Fire Department. He was engaged in several businesses, including a coffee concern, and the B&L Garage in Jeffersonville, which he owned in partnership with his brother-in-law, John Lipset.

He also helped found the Ruddick Trowridge Post of the American Legion, and was one of its busiest members, serving as post commander in 1931.

In late summer of 1933, Jesse Brams hit his thumb with a hammer—not for the first time—and although the injury was painful, he ignored it for several days, until he began to suffer excruciating pain in his shoulder, at which time he took himself to Monticello Hospital.

Diagnosed with blood poisoning, Brams was quickly transferred to Horton Memorial Hospital in Middletown, but he was beyond help. He died there on September 5, 1933. He was just 36 years old.

Brams’ funeral at the Monticello Funeral Home drew a “who’s who” of officials from far and wide. The Sullivan County Republican newspaper reported in its September 8, 1933 edition that “Rabbi Brown delivered a heart rending eulogy just before the body was removed from the home.

“Jew and Gentile alike sobbed openly for Jesse Brams, who was held in such high esteem by all,” the paper reported. “The flag-draped casket was followed by the Color Guard and the Firing Squad. Legionnaires and members of the Auxiliary fell in line here, followed by representatives of Delaware Valley Post No. 1020, Neversink Valley Post No. 1053, Russell D. Sprague Post No. 109 of Liberty, Private Emmet Turner Post No. 276 of Jeffersonville and Lester White Post No. 556 of Livingston Manor.”

Jesse Brams was buried in the Workmen’s Circle Cemetery in Monticello, but his memory lived on.

On Sunday, May 7, 1939 thirty-five Jewish war veterans and numerous dignitaries from throughout New York State and beyond gathered in Monticello to form Sullivan County’s first Jewish War Veterans post.

The post was officially designated #206, and was named in honor of Jesse Brams.

The Jewish War Veterans organization had been formed on a national level in 1896 by a group of 63 Jewish veterans from the Civil War. Except for the Grand Army of the Republic, it was the first veterans’ group founded in the United States, and is currently the longest running veterans’ service organization in the country.

The national group became particularly active in the years leading up to World War II, and was credited with helping to get the Foreign Agents Registration Act passed in 1938, which led to the expulsion of known Nazi agents from America.

The dedication ceremonies for the new Sullivan County post got lots of press attention, including an article in the May 5, 1939 edition of the Sullivan County Republican newspaper.

“On Sunday afternoon next, another soldier and sailor organization will be born in Sullivan County when institution and installation ceremonies will be held by members of Jesse Brams Post, Jewish War Veterans of the United States,” the article proclaimed.

“The exercises will take place at the Community Center, Monticello at two o’clock, and will be in the charge of State Commander Sidney Z. Davidson of Rochester, and his staff. Jewish War Veteran posts of New York, New Jersey, Pennsylvania, Connecticut, and Massachusetts will attend the inaugural meeting. County and local officials will also be present.

“Thirty-five charter members have already joined the newly organized post, which will be the only one of its kind in the county.”

The Jesse Brams JWV Post operated out of various locations in Monticello for a number of years while raising funds to construct a new Veterans’ Memorial Hall, which still stands on Liberty Street in the village and has recently been repurposed.

More on that story in a future column.