A look back at sports: Roscoe holds off Wildcats

LIVINGSTON MANOR - Two days after an emotional overtime win against Tri-Valley, Livingston Manor faced a Roscoe squad which may have replaced TV as the class of …

A look back at sports: Roscoe holds off Wildcats 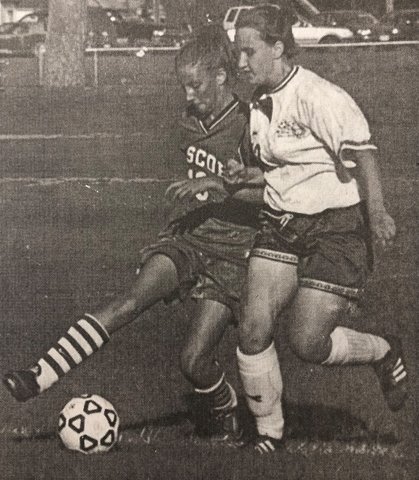 LIVINGSTON MANOR - Two days after an emotional overtime win against Tri-Valley, Livingston Manor faced a Roscoe squad which may have replaced TV as the class of Western Sullivan League girls' soccer.

The result was a 3-1 victory in Manor by the visiting Blue Devils on Friday, but the game was closer than the score would indicate.

A couple of missed Manor opportunities going the other way, and the outcome could have been different.

“We were tired. It was our third game this week,” was the simple explanation of Manor (1-2-1 WSL) coach Shirlee Davis. “We also had a couple of injured (starters) and I had no bench.”

Still, Davis gave credit to Roscoe, which is in sole possession of first place right now.

Amanda Huck opened the scoring for Roscoe at 19:23, beating keeper Jen Miller from 20 yards out with a shallow parabolic shot that tucked itself under the crossbar.

Minutes earlier, Miller had come out to make a sliding save on Mary Kate Johnston's breakaway.

Manor had its chances, but could not seem to get enough force on its shots on net.

With just under seven minutes left Erinn Adamse launched a low, soft left-footed shot, which evaded the grasp of a diving Roscoe goalie Becky Evans. The netminder quickly snared the ball, couldn't control it, and it hung tantalizingly loose for a moment. However, none of the Wildcats were able to put a foot on it.

Manor partisans protested, claiming the ball had crossed the line - only the refs were not in position to see it.

All that became moot at 2:51, when Adamse took advantage of a Blue Devil defensive mix up to punch the ball under the crossbar and tie the game.

The hosts could have gone ahead with 1:04 left, when Roscoe was charged with a handball in the goal area. Rachael Failla took the penalty kick, and it bounced off the post.

Just 1:48 into the second half, Danielle Austin tallied to put Roscoe ahead for good.

At the Roscoe end, Failla got off a shot which hit off the crossbar and bounced down. Manor forward Dorthel Seibles swooped in on it, but Evans grabbed it first.

Danielle Austin then scored again, with 4:51 elapsed. She intercepted a bad clearing pass and beat Miller with a ground-skimming shot into the corner.

Manor kept the Blue Devil defense busy throughout the half, but never finished off the several scoring opportunities which came its way.

Evans made 20 saves for Roscoe (2-0 WSL) while Miller stopped 14 for the Wildcats.

Yet for Davis, the Blue Devil backline was challenging enough.

“My forward line is (made up of) mostly juniors and they're learning to play against varsity defenders,” Davis pointed out. “They were a little slow in anticipating and in their reaction time.”