It is estimated that perhaps as many as 200 bald eagles spend their winters in the Upper Delaware region these days, and quite a number live here year around, but not long ago, the raptors were a … 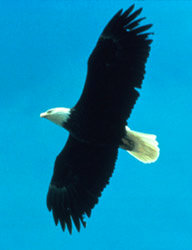 These days, bald eagles are a fairly common sight in the skies over Sullivan County, particularly over the Delaware River.
Contributed Photo
Posted Friday, December 10, 2021 7:00 am
John Conway

It is estimated that perhaps as many as 200 bald eagles spend their winters in the Upper Delaware region these days, and quite a number live here year around, but not long ago, the raptors were a rare sight.
On any given weekend these days it is not unusual to see dozens of people perched along the Delaware River and other select spots with binoculars, telescopes, or cameras observing the comings and goings of the magnificent white hooded birds. And despite the declaration by one short-sighted Sullivan County economic development official years ago that “when the eagles start dropping dollar bills over the county, then I’ll consider promoting them,” those bird watchers have been a boom to the economy here, especially during the winter months when the county has traditionally needed it most.
The Delaware Highlands Conservancy, which, among other things, sponsors eagle watching tours in the county, notes that today there are hundreds of pairs of nesting bald eagles throughout New York State, but in 1975, there was just a single pair.
So it is perhaps not surprising that the discovery of four bald eagles in Sullivan County in 1953 was front page news.
“Count of Birds Finds Area Has 4 Bald Eagles” announced a headline on the front page of the January 1, 1953 edition of the Liberty Register.
The article went on to describe a survey conducted by 17 local volunteers and restricted by rules to a circular area 15 miles in diameter that was chosen because it was believed to “include the most types of habitats for birds, at elevations ranging from 600 feet in the Mamakating Valley to 1,600 feet near Monticello.”
“Some residents might not be aware of it, but there are—or at least were—bald eagles, hooded mergansers, and rose-breasted grosbeaks among a flock of unusual or unexpected birds observed during the annual bird count Saturday sponsored by the Sullivan County Audubon Society,” the Register reported.
Although the Audubon volunteers considered the spotting of four bald eagles in Sullivan County that year unusual, apparently they were somewhat more common not that many years before. In March of 1939, the Register had reported that “it was not unusual for eagles to be seen in Sullivan County, especially during the winter months.”
And yet that very statement was part of a story about the excitement caused when a man named Felix Schlesinger had reported seeing an eagle near Liberty. In fact, authorities had considered his report so unusual that their first move was to contact the Bronx Zoo to see if any of the bald eagles housed there had escaped. They had not.
In its November 20, 1941 edition, the Register noted that “bald eagles are becoming numerous along the Delaware according to Commissioner Osborne, who notes that they ‘subsist primarily on dead fish along the river.’”
And yet, by 1964, the annual Audubon Society survey accounted for just two bald eagles in Sullivan County, “both mature.”
By that time, the bald eagle had become one of the first species to be declared endangered, as the eagle population “had hit rock bottom,” according to the American Eagle Foundation, which reported that “only 417 mating pairs could be documented in the 48 states, and the survival of the species was in question.”
By the 1970s, as hunting—which the U.S. Congress had made illegal in 1940-- and toxic chemicals such as DDT continued to take a toll on the population nationwide, the raptors appeared to be making a bit of a comeback, although they were still hard to find, even in their usual habitats. The Times Herald-Record newspaper reported in its February 2, 1972 edition that “Rare Eagles Spotted in Sullivan.”
In a Monticello datelined story, the paper noted that “the endangered bald eagle is alive and well in Sullivan County.”
That year, the Audubon Society reported that it had found seven eagles, including four adults, in one tree at the Mongaup Reservoir. One additional eagle was found in the Bashakill area near Wurtsboro. The paper quoted the Audubon Society’s Martin Borko as citing the large number of deer carcasses and open water for attracting the eagles here. Sullivan County, he said, likely had the highest eagle count in all of New York State.
“Eagles are found by the Society every year,” Borko told the Record, “but not usually in such high numbers.”
Fast forward to 2007, and the American Eagle Foundation reported that “government biologists have counted nearly 10,000 mating pairs of bald eagles, with at least one pair in each of the lower 48 states.”
“The rescue of the bald eagle … ranks among the greatest victories of American conservation,” said John Flicker, president of the National Audubon Society.
And dropping dollar bills or not, among the greatest boosts to Sullivan County’s economy during some very dark times.

John Conway is the Sullivan County Historian. Email him at jconway52@hotmail.com. He will be signing his book, “In Further Retrospect,” tomorrow at 1 p.m. at the Secret Garden, 4917 Route 52, Jeffersonville.