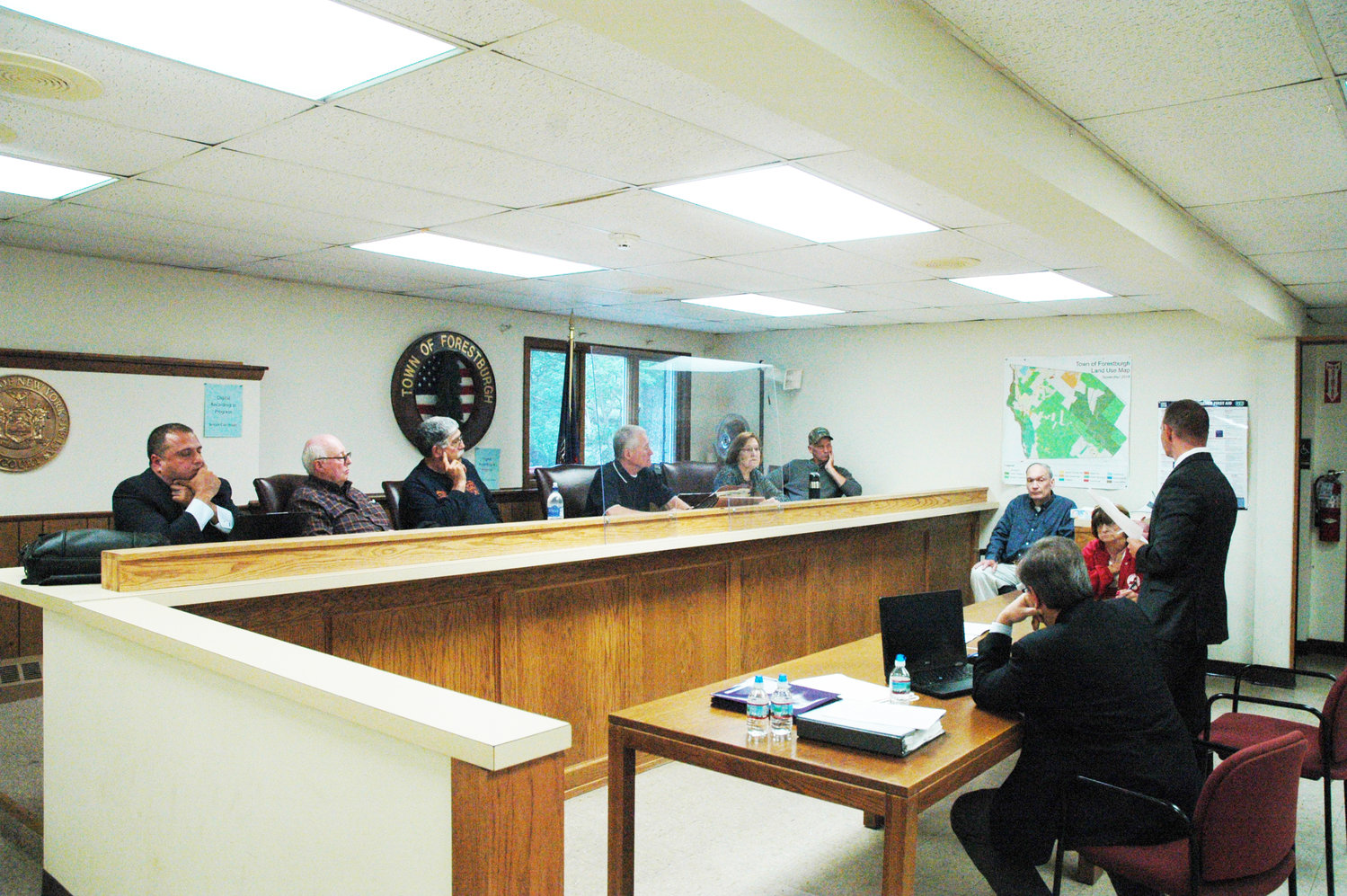 The evidentiary hearing regarding the denial of building permit for Lost Lakes Holdings LLC, which began on May 31, resumed with Town of Forestburgh Building Inspector and Code Enforcement Officer Glenn Gabbard giving his testimony before the Town’s Zoning Board of Appeals on Wednesday.
Derek Kirk | Democrat
Posted Friday, June 24, 2022 5:33 am
By Derek Kirk

FORESTBURGH – The evidentiary hearing process resumed for the appeals case regarding the denial of building permits to Lost Lakes Holdings LLC by Building Inspector and Code Enforcement Officer Glenn Gabbard, as Gabbard took to the witness stand during the Forestburgh Zoning Board of Appeals (ZBA) meeting on Wednesday, June 22.

The evidentiary hearing was adjourned on May 23 after legal representative of Lost Lakes Holdings LLC Steven Barshov of Sive, Paget, and Riesel, PC, called for the appearance and testimony of Gabbard, but was denied the issuing of a subpoena by the ZBA.

Barshov claimed that Gabbard was a “key witness” in his case as the Building Inspector who issued the denial of the permits.

ZBA Chairman Carl Amaditz confirmed that Gabbard appeared before the Board on Wednesday of his own will, despite the board denying a subpoena for his appearance at the previous ZBA meeting. It was also noted that due to an undisclosed medical condition, Gabbard’s time on the stand was monitored in interest of protecting his health.

This was met with contention from Barshov, stating he was of the understanding that Gabbard stated that he was not going to have legal counsel, as well as the ethics of two attorneys hailing from the same law firm representing two separate entities in the same case.

Afzali noted that the ZBA, the Town of Forestburgh, and other municipal boards default to attorneys from Harris Beach. Chairman Amaditz also said that it was not the Board’s personal responsibility to go out and find another attorney.

After being sworn in by the Chairman Amaditz, Gabbard gave his testimony before the Board, in which the Building Inspector responded to questions asked by Hallak.

Among the questions asked, Hallak inquired Gabbard on what factors determined his disapproval of the building permit applications. Gabbard responded that he denied all but one building permit on the basis that he was “made aware of certain architectural and environmental standards that are overlayed in that district.” Gabbard goes on to say that the dwellings’ architectural design and features, and energy conservation design were inconsistent with what was approved by the Town Board.

Gabbard also confirmed that he was in communication with engineer Charles Voss. Gabbard claimed that he had forwarded the plans and applications to Voss, and considered his input while making his decision.
Hallak asked Gabbard to explain the differences between what was submitted in the application and what was approved by the Town Board.

“First of all, the single family homes did not meet certain design requirements,” Gabbard said.

The design requirements that Gabbard said failed to meet the standards include attached garages, roof pitch, and some other additional lead and building standards that were not adhered to.

After the conclusion of Gabbard’s testimony, Barshov began his cross examination of the Building Inspector. Many of these questions were met with objection from Hallak.

One question Barshov asked was which aspect of the design failed to meet the “upscale” standards for Lot 303.

Gabbard claimed it was the design of the home itself, and not the monetary value of the home that was the cause for denial of permits on the Lot.

Barshov’s cross-examination was cut short in the interest of Gabbard’s health, and no official action or decision was taken from the Board on the matter.

The evidentiary hearing was recessed by the ZBA and was scheduled to resume yesterday.

The Democrat will have further coverage of the resumed evidentiary hearing next week.