LAKE HUNTINGTON- And so it was written that when David faced mighty Goliath, armed only with a slingshot and unshakeable courage, what ensued was an act that few could have foreseen. He took aim, … 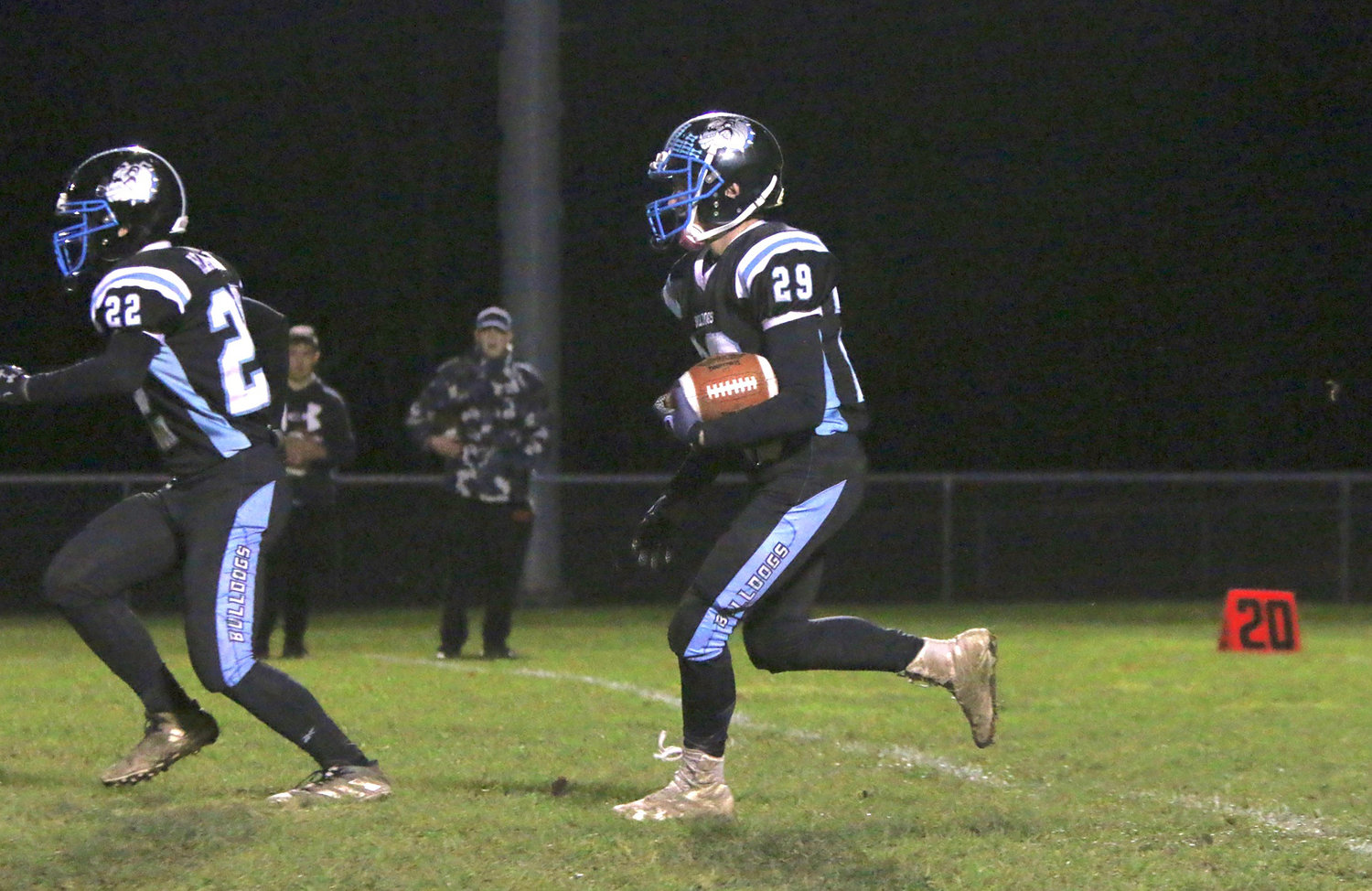 Sullivan West sophomore Jacob Hubert returns the opening kickoff 80 yards to the Pawling five setting up a Gavin Hauschild TD run for the early 6-0 lead. Hubert had a key interception of a Pawling pass early in the third quarter to deny the Tigers a chance to shift the momentum. Hubert’s opening kickoff returns have been emblematic including opening kickoff TD returns against T-V and Roscoe.
Richard A. Ross | Democrat 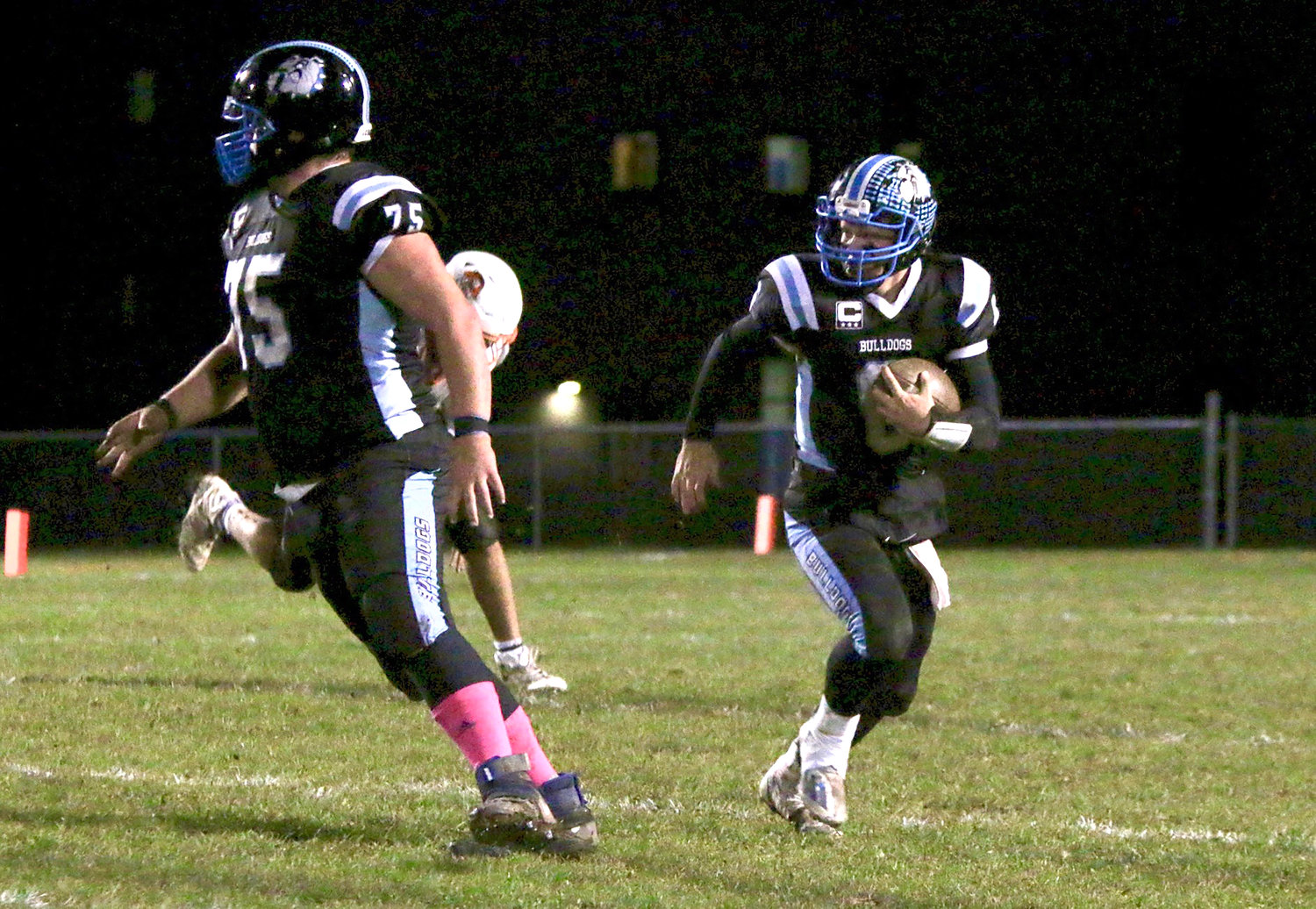 Senior quarterback Gavin Hauschild ran for three TD’s and threw for another in a break-out performance. He rushed for 150 yards. Here, he follows behind the awesome blocking of senior Chris Campanelli.
Richard A. Ross | Democrat 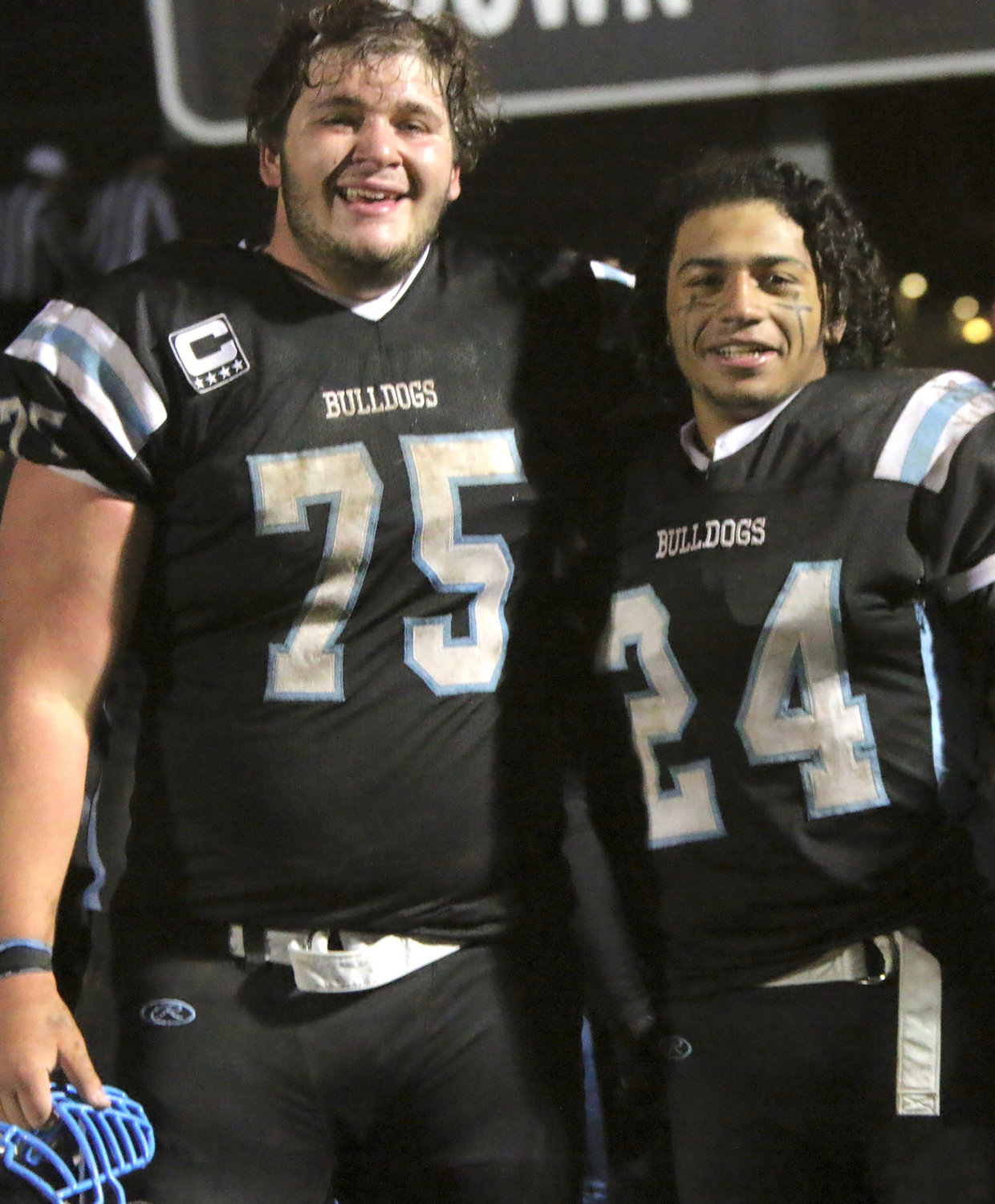 LAKE HUNTINGTON- And so it was written that when David faced mighty Goliath, armed only with a slingshot and unshakeable courage, what ensued was an act that few could have foreseen. He took aim, gave it his best shot and lo and behold, the giant fell.

While the biblical story may not be an exact analogy to Sullivan West’s thunderous, dominating 42-24 win over Section 9 Eight-Man Football defending champion Pawling in the semifinals, there is more here than a hint of parity. After all, Pawling had been anointed by many as the overwhelming favorite to repeat as champions. Their slip up against Spackenkill that resulted in their only loss was considered by their coach Jason Kuhlmann to be a bump in the road resulting from his team’s momentary overconfidence.

The Tigers looked forward to a rematch with the Spartans to set the record straight and retain their trophy. Regarding the imminent fray with Sullivan West, the expectation for the Tigers was a return to business-as-usual. “We’ve seen everything they do,” Kuhlmann noted referencing their film analysis of the Bulldogs. Needless to say, from his across-the field vantagepoint during warmups, he could not detect the fiery look in the Dawgs’ eyes.

The last two weeks, SW had prepared assiduously for this fray, and they were unfazed by the hoopla about Pawling’s alleged superiority, while being respectful for their quarterback Will McCarthy’s prowess. Respectful yes; intimidated no. It had been seven years since the Bulldogs last won a Section IX football title, and that was back in the heyday of the 11-man grid wars. With a vociferous crowd behind them in the environs of their own stadium, Sullivan West was poised to sling it at Pawling and knock the Tigers out of contention with a resounding blow.

And thus, the tale unfolded in just that way.

Great stories entice with memorable opening pages and the Dawgs offered just such a riveting attention grabber. On the opening kickoff, sophomore Jacob Hubert burst through would-be tacklers and ran 80 yards reminiscent of similar starts against T-V and Roscoe. He was stopped at the five, but two plays later, and just 15 seconds into the game, senior quarterback Gavin Hauschild crossed the goal plane and a stunned Pawling team looked up to see they were losing 6-0. The conversion failed, as it would on all their next six TD’s, but the first words of the captivating tale had been penned. More came on Pawling’s first drive, abetted by a strong kickoff return to the Westie’s 25. Pawling got as far as the one-yard line before the Bulldogs’ staunch defense stopped them in their tracks. Scoring first and getting a huge goal line stand ramped up Westie confidence. Taking over on downs, the Bulldogs notched first down after first down as Hauschild converted a third and eight with a pass to Hubert.

Pawling’s jitters evinced in an encroachment penalty and sophomore Rally Cruz rose to the occasion with carries, a pass reception and then a four-yard TD with 1:58 to go to give the Dawgs a 12-0 lead. Pawling’s offense continued to be stymied by SW’s aggressive defense.

McCarthy’s passing game was severely hampered by a strong pass rush and covered receivers. The second quarter brought two more Dawg TDs including a 45-yard breakaway by senior Tarrell Spencer and a five-yard jaunt by Hauschild. The Dawgs now led 24-0. Pawling looked gassed but with only three seconds remaining McCarthy hit his favorite target, Alex Rida, with a 21-yard strike and then ran in the conversion to make it 24-8.

With Pawling due to receive to start the second half, the idea of a shift in momentum loomed as a possibility. But a Hubert interception on that first series of the second half added allure to this ongoing page-turner. With 10:49 remaining, Hauschild ripped off another five-yard TD run to make it 30-8. Five minutes later it was Jakob Halloran crossing the goal line after a 15-yard reception for the 36-8 lead. The Dawgs were clearly tired, and McCarthy took advantage with his deft throws to record two fourth quarter TD strikes, but Hubert ran off a 51-yard TD run in between the two. The active quarter penned the epilog of the 42-24 victory.

Jubilation and excitement were on display as the Dawgs jumped and laughed. Coaches poured volumes of praise on the effort, but reminded the team that the goal is to win the Section IX title. Spackenkill beat Roscoe 38-24 and will host the championship tilt at 12:00 on November 13. Sullivan West improved to 6-1 while Pawling ended its season at 6-2.