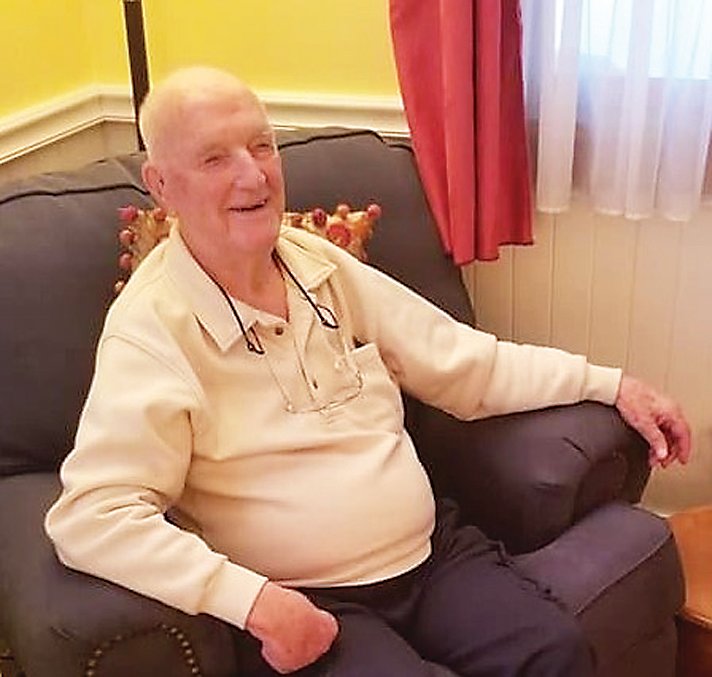 John Russell Elmore (Russ), age 101, of Troy NY, formerly of New Hartford, CT, passed away peacefully early Sunday morning, April 10, 2022. He is survived by his son, John Elmore of Salina, KS, and daughters Susan Elmore of Chatham, NY, and Nancy Wendlandt of Bourne, MA; plus ten grandchildren, four great-grandchildren, two brothers, and a large clan of nieces and nephews. Preceded in death by his treasured wife, Barbara (Bobbe), and his youngest daughter, Sharon Lewis of Barkhamsted, CT, as well as by six brothers and two sisters.
Russ’s long life has had many chapters:
Born January 28, 1921, the eighth out of eleven children of Willard Ray Elmore and Rosa Lewis Elmore in South Fallsburg, NY, Russ’s early life was filled with old-style (draft-horse) farm chores, boarding house guests, one-room schoolhouses, early graduations, and jobs like hand-setting bowling pins. Then came the engineering life at Rensselaer Polytechnic, with flying lessons, sports, and figure skating, all interrupted midstream by WWII and Army machine and optics repair in Europe. Long years of suffering from tuberculosis and spinal fusions followed, with the monotony broken slightly by small crafts like woodburning and leatherworking.
At last, in 1951 came health, marriage, college graduation and a career. Four kids! Family life, along with mechanical engineering in Syracuse, NY and Torrington, CT, yard work (like creating high-flying swings and a skating rink), bridge club, tennis, golf, and even a motorcycle filled his time. And always, there were extended-family reunions and visits. In retirement he was generous with his time and resources, snow-blowing the neighbors’ sidewalks, sweeping the tennis courts nightly, and helping the kids and relatives. A sadder chapter ensued starting around 2001, with Sharon’s death from cancer and Barbara’s rapidly declining health and memory, including a paralyzing stroke mid-decade. In his 80s, Russ rose to the challenge, sold the big house and cared for her devotedly until her death in 2010.
Single again at nearly 90, he won duplicate bridge tournaments in downtown Great Barrington, MA, and developed an intricate and lasting hobby of creating framed yarn pictures of relatives’ houses. Adventures with daughter Susan (dance performances, boat rides, parasailing, and zip lining) livened things up, and he begged to try skydiving, but, with a fused spine aimed at his brain...? He had to settle for hallway Jazzy chair racing, followed by recliner napping.
At his senior living community in Troy, NY, Russell tried to be helpful and good-humored, often devoting his energy to one or another less able resident, even as he described himself as “mean and miserable.” Covid restrictions wore him down, but near the end, many nurses commented on how sweet he was, and friends on how smart he was. He is missed already by his fellow residents and staff.
A private family memorial gathering will be held to celebrate and remember Russ. He will be laid to rest with his wife Barbara in the Barkhamsted Center Cemetery, near Sharon’s home in Barkhamsted, CT. Your warmest memories and prayers will reach him any time, any place.