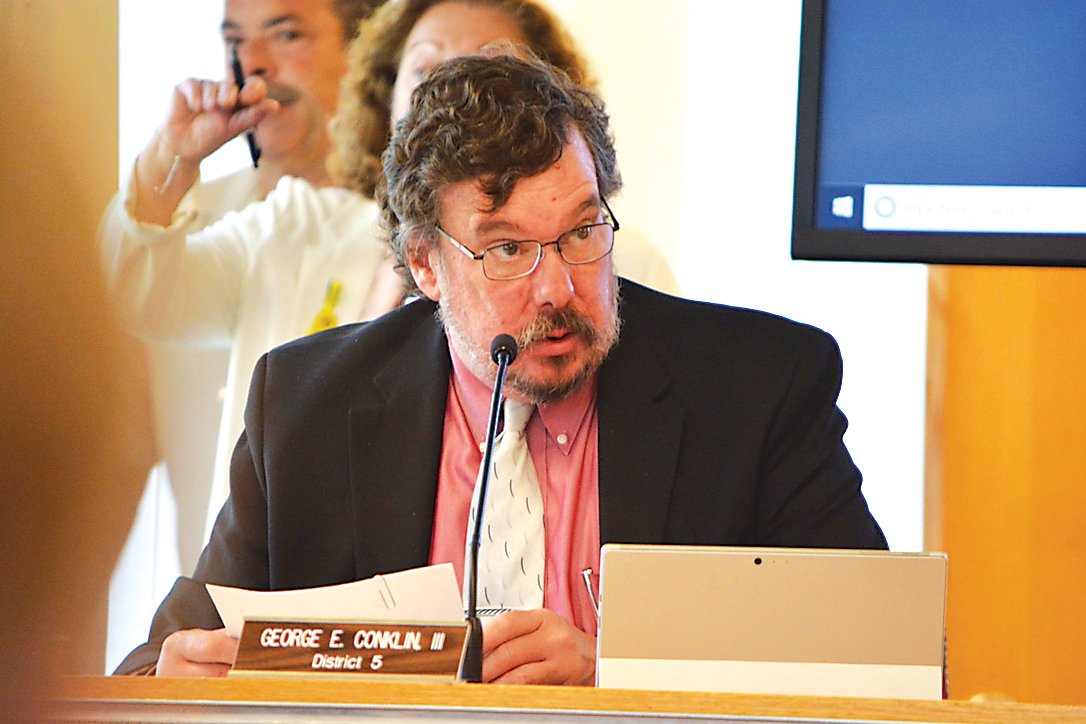 Legislator George Conklin’s District 5 saw a population decrease of 1,200 people from the 2010 to 2020 census. However, Conklin claims that while the census may have declined, there are more people in his distict than ever before due to the rise of short-term rentals.
Joseph Abraham | Democrat
Posted Tuesday, May 17, 2022 6:10 am
By Joseph Abraham

Redistricting, or the process of redrawing legislative districts, usually occurs after the census is completed at the start of each decade, to reflect changes in the populous.

On Thursday, during a special meeting with Main Street Communications’ Dave Heller, legislators made it clear that throughout the process, County Manager Josh Potosek would be Heller’s point person. District 7 Legislator Joe Perrello insisted that if any legislator contacted Heller to attempt to influence him during the process, Heller should then notify Potosek.

Heller, using software equipped with census data, will create maps that balance the nine districts’ populations. He told legislators that outside of census data, he could only use info they provide to make three maps for them to consider. While legislators could have provided political data, they opted not to.

Minority Leader and District 8 Legislator Ira Steingart told Heller that while they expect some changes due to population growth (especially on the eastern side of the County), there’s consensus amongst the Legislature to keep the district lines as close as possible to what they have now.

Legislative Chairman Robert Doherty later added that they’d also like to keep the County’s 64 voting districts as they are now.

However, there may be some changes in the districts of Legislators Nadia Rajsz and George Conklin.

Rajsz’s district is geographically the largest, as it includes parts of four towns (Lumberland, Highland, Forestburgh and Mamakating). Rajsz asked Heller if he could restructure that “huge” district to make it more manageable and contiguous with the other towns.

Conklin, who serves the most northwestern district, noted how he’s lost 1,200 people from the 2010 Census to the 2020 Census.

“We’ve got a huge contingent of short term rentals now,” said Conklin. “There’s more people in my district than there ever was, but they’re not residents.”

Doherty requested that all of the legislators, the clerk of the legislature, the county attorney, two board of elections commissioners and the real property tax services director receive the maps on the same day.

Doherty added that they’d like the maps by June 18, which Heller said he could do, assuming he promptly receives the software.

Following the completion of the maps, Doherty said he’d like to see all three put out to the public, and that they be given a month to make any comments before the legislature makes their choice.

Furthermore, Rajsz and Conklin, both former town supervisors, also felt town leaders should be involved in the discussion.

“This would be a good time for a Council of Governments meeting to be put together,” added Conklin.