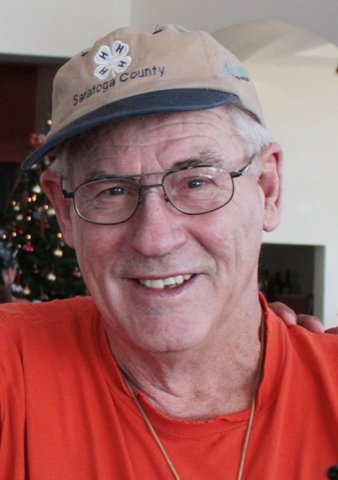 In his early years, Lew explored North America by hiking and climbing various trails from New York to California. Following in his father's footsteps he became a carpenter and served as a member of Carpenters Union Local 370 in Albany. He also worked for some years at Bast Hatfield Construction.

He volunteered on the Ballston Lake Ambulance Squad and was a member of Our Lady of Grace, Hudson Valley Harp Association, the Schenectady Pipe Band, Northeastern Woodworkers Association, and Boxing for Parkinson's. Lew enjoyed a full life of hobbies which included reading westerns and sci-fi, listening to Scottish and Irish music including bagpipes and harp, drinking single malt scotch, eating ice cream, embracing nature through gardening, beekeeping and farming, woodworking, and exchanging puns and limericks. His life's mission was to make people smile and that he did.

There once was a man named Lew,

He always did pun,

Because it was fun,

Even if you hadn't a clue.

In lieu of flowers please donate to the Ballston Lake Emergency Medical Service, Northeastern Woodworkers Association, or the Sierra Club.

A celebration of life will be held on a later date.

Online remembrances may be made at www.armerfuneralhome.com.