COCHECTON CENTER - If the very first game gave spectators any indication of how the rest of the Tournament was going to go, they would have known that Heinle's Generals … 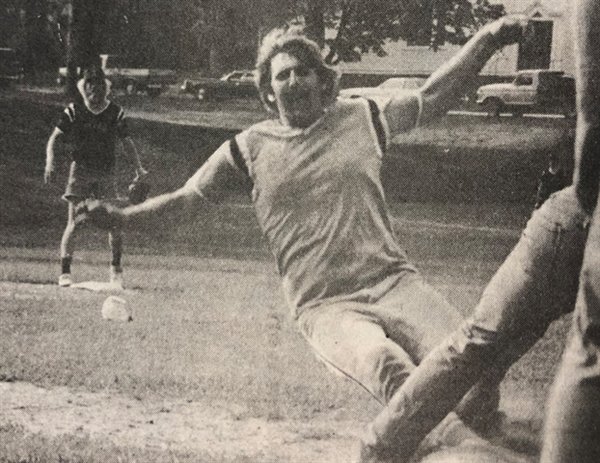 Mark Tyler of Heinle's Generals makes a picture-perfect slide into third base during the championship game of Pete's Pub Tournament against Peck's. Mark had a double in the game.
CONTRIBUTED PHOTO 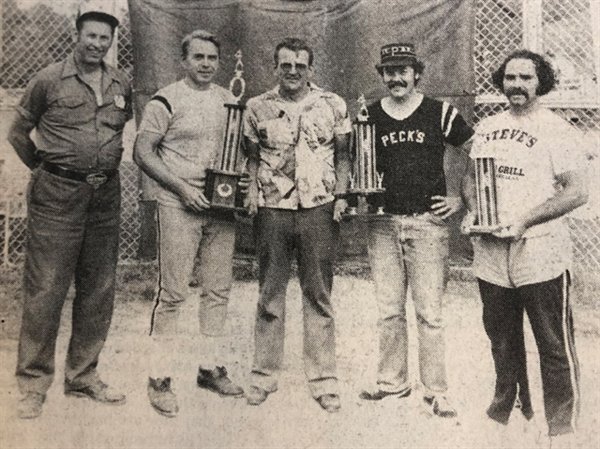 COCHECTON CENTER - If the very first game gave spectators any indication of how the rest of the Tournament was going to go, they would have known that Heinle's Generals were going to take the first place trophy - the third time in as many years - in the Annual Pete's Pub Softball Tournament.

Heinle's were challenged - if ever so slightly by Long Eddy in the first game of the Tournament after jumping out to a 10-1 lead. Long Eddy could only push across six more runs and went down to defeat, 11-7.

Next on the Heinle's “hit-list” was Steve's Bar & Grill, who gave Heinle's all they bargained for and more, before finally losing, 9-6 in the semi-final round.

Heinle's scored five runs in the first inning but Neil Trautschold came in to relieve the starting pitcher for Steve's and only faced 13 Heinle batters over the next four innings, as Steve's was able to tie the game, 5-5.

Heinle's four-run rally in the bottom of the sixth broke Steve's chance of an upset and Heinle's moved into the finals with a 9-6 victory.

Mark Tyler had three doubles and Bob Dailey had a triple and a single to pace Heinle's.

Bob Meyer was the winning pitcher, giving up six hits while striking out two.

Joe Meola had a double, single, and two RBI's for Steve's.

In the other semifinal contest, Peck's outlasted the Nutshell, 2-1, to advance to the Championship.

Peck's left 10 men stranded on base and the Nutshell left eight baserunners hanging, in the best defensive game of the Tournament.

Neil Trautschold fired the victory and was helped by the hard hitting of Joe Meole and Peter Sawall.

In the championship game Peck's and Heinle's faced off, but Peck's couldn't contain Heinle's hitters the entire game. Heinle's broke loose for six runs in the last two innings for a 7-2 victory and the Championship.

Kirby Tyler, the tournament MVP, was 3-4 and had three RBI's in the finale and added some sensational fielding which included a diving catch of a line drive off the bat of Fran Henke to end the game.

Heinle's took a brief lead in the top of the first when Barry Lagoda scored but Peck's soon tied the score when Bob Head doubled in Hal Roeder.

Neither team scored the next four innings as pitchers Ron Canfield and Dick Schelberg didn't let a runner get past first base.

The top of the sixth proved fatal for Peck's, though, as Ron Canfield led off with a double, Kirby Tyler singled Canfield home, and Gary Maas, and Nober later scored to give Heinle's a 5-1 lead.

Peck's rallied for one run but it wasn't enough as Heinle's won their second Tournament championship of the season, 7-2.

Ron Canfield fired the winning game with a sparkling six-hitter.

Lee Reimer was 2-3 and Bob Head hit a double for Peck's.

After Heinle's, 11-7, victory over Long Eddy Saturday, the Nutshell and Frank-N-Stein's took the field.

The game was close - but only for one inning - as the Nutshell exploded for a 14-4 victory. Paul Furk Jr. was the winning pitcher firing a nine-hitter while striking out five.

Steve's scored nine runs in the second inning and four in the fifth for the win.

Joe Meola paced Steve's with a single, triple, homerun, and two RBI's as Neil Trautschold was the winning pitcher.

The final first round game matched host Pete's Pub again Peck's of Callicoon but Peck's showed no mercy in a 10-6 victory. Dick Schelberg tossed a nine-hitter for Peck's and added two hits.