On Friday, August 8, 1902, the surviving members of the 28th New York Volunteer Regiment held their annual reunion at the National Cemetery in Culpeper, Virginia.

Among those attending that … 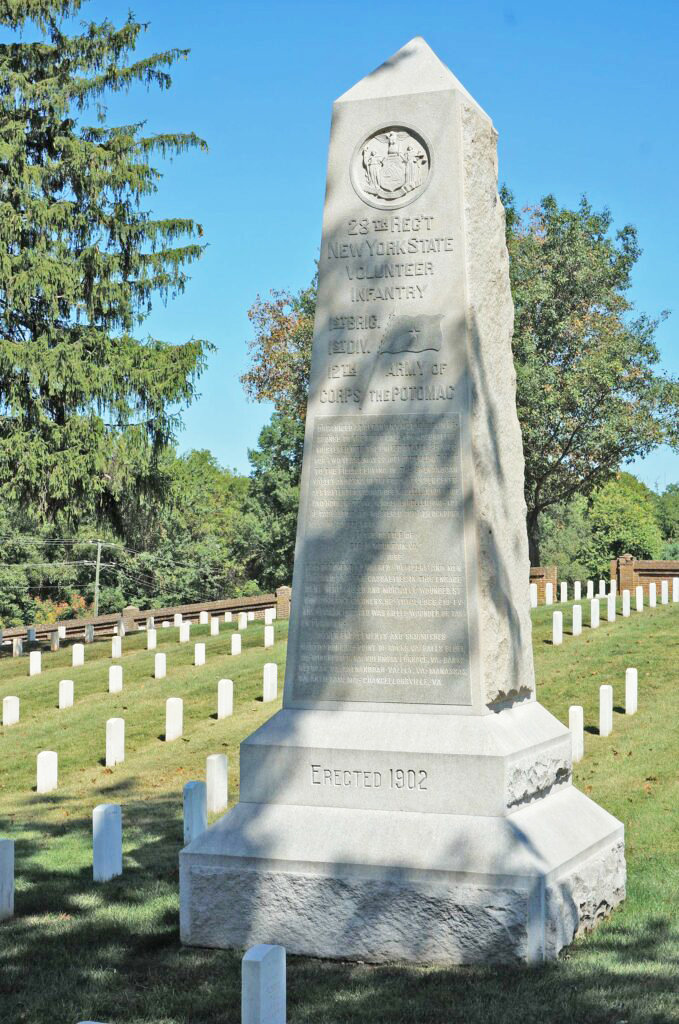 The monument in Culpeper, Virginia honoring those members of the 28th Regiment, New York Volunteers who fell at the Battle of Cedar Mountain on August 9, 1862. The monument was dedicated in 1902; two Sullivan County men were in attendance.
Contributed Photo
Posted Friday, May 27, 2022 7:00 am
John Conway

On Friday, August 8, 1902, the surviving members of the 28th New York Volunteer Regiment held their annual reunion at the National Cemetery in Culpeper, Virginia.

Among those attending that day were two men from Sullivan County, John H. Waller of Monticello and William McIntyre of Mongaup Valley.

Waller was just 31 years old when he raised what would become Company H of the regiment in Monticello in May of 1861, just a few weeks after Confederate forces fired on Fort Sumter and President Lincoln had issued his proclamation calling for troops.

McIntyre was 28 years old when he enlisted in Monticello on April 30, 1861, and mustered in as a private three weeks later. He was one of nearly 100 men who left Sullivan County with Waller in May to join the Union cause, meeting up with the rest of the regiment in Albany before heading south.

Among the orders of business at the meeting portion of that 1902 reunion, held almost 40 years to the day after the Battle of Cedar Mountain had occurred on that site, was the dedication of a massive new monument to those members of the 28th Regiment who had lost their lives in that bloody confrontation.

The battle at Cedar Mountain, on August 9, 1862, was the first clash between Robert E. Lee’s vaunted Army of Northern Virginia and Union General John Pope’s newly-formed Army of Virginia. The heavily outnumbered Union forces had made a valiant stand that day, but were eventually routed, and the 28th had taken heavy casualties.

The 28th had been busy ever since they arrived in Washington, D.C. in the summer of 1861, eventually seeing action throughout Maryland and Virginia, including at Cedar Mountain, Rappahannock Station, Bull Run, Antietam and Chancellorsville.

All battles are brutal, but few matched the intensity of Cedar Mountain, in which the regiment had 213 men either killed, wounded or missing out of 339 engaged. Of those, 41 men from the regiment were killed that day.

Members of Company H who had enlisted in Monticello and were killed at Cedar Mountain included John P. Carpenter, George Egner, Abram Neer, James A. Palmer (who was also sometimes referred to as James A. Parmer), and Sergeant Alfred Pierson.

In addition, Corporal Matthew Linsen (or Linson), who was severely wounded in the battle, would succumb to those wounds in a hospital in Culpeper, Virginia a few months later.

Twelve members of Company H, including Linsen, were wounded at Cedar Mountain, and another eight were taken prisoner.

Of course, the 28th Regiment was just one of many who took part in the fighting that day, as approximately 8,000 Union troops and twice as many Confederates, including Stonewall Jackson, were involved.

The battle has become well known among Civil War historians for a couple of firsts: for one, it marked the first official field duty for the nurse Clara Barton. Barton had treated wounded soldiers on her own initiative after the battle at Bull Run the year before, and received official permission to accompany the U.S. Army to the front lines on August 3, 1862, just six days before the clash at Cedar Mountain.

She spent two days and nights on the battlefield tending to the wounded, including Confederate prisoners, after her arrival on August 13.

Cedar Mountain was also the first time that photographs of dead horses on an American battlefield were seen by the American public, as the result of the work of photographer Timothy O’Sullivan, who photographed the aftermath of the battle.

A month later, at Antietam, O’Sullivan would shoot and publish the first photos of dead soldiers on a battlefield.

The story of the battle at Cedar Mountain is vividly told in a recently-published book by Michael E. Block entitled, “The Carnage was Fearful: The Battle of Cedar Mountain.”

The volunteers of the 28th Regiment had enlisted to serve for two years; they mustered out in Albany, NY on June 2, 1863. Many of them went on to fight with other units for the remainder of the war. John Waller, a Captain with the 28th, was promoted to Major in December of 1862, and went on to serve with the 132nd Infantry.

After the war, he returned to Monticello, where he published the Sullivan County Republican newspaper and became known simply as “the Major.” He lived until 1919, and is buried in St. John’s Cemetery in Monticello.

John Conway is the Sullivan County Historian. Email him at jconway52@ hotmail.com.