Battled back from a deficit in both Sunday matches

CALLICOON -- Usually when referring to ‘comeback kids' in sports, you're talking about the underdogs. But that isn't always the case.

The team of Sean Semenetz and Joe Winski are no …

Battled back from a deficit in both Sunday matches 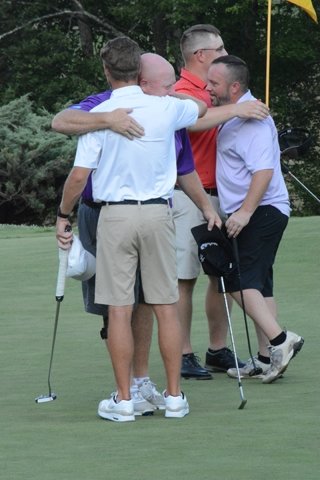 All four golfers have a mutual respect for one another and simply enjoying spending time golfing together. Both teams know how to push the other to the limit.
JOSEPH ABRAHAM | DEMOCRAT 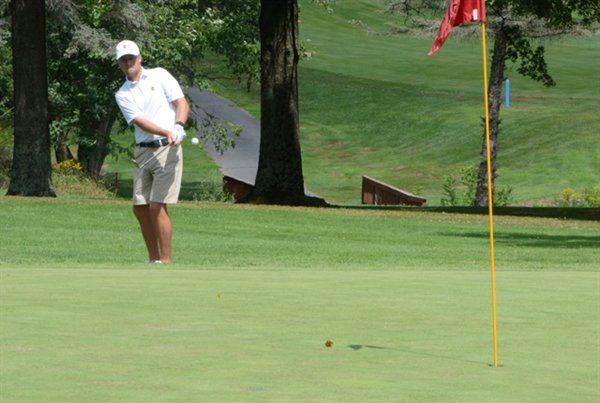 Sean Semenetz chips this ball onto the ninth green, setting up a putt for par, which evened the score heading into the back nine.
JOSEPH ABRAHAM | DEMOCRAT 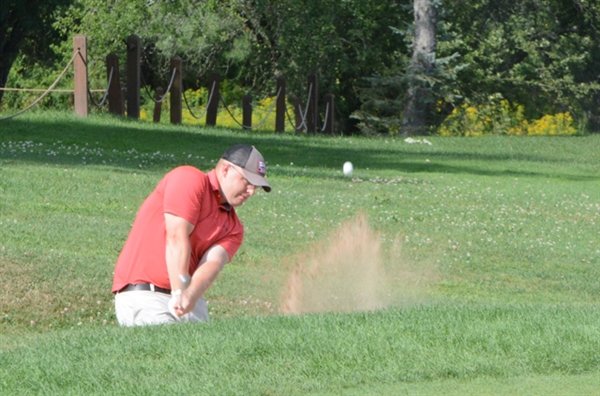 Joe Winski blasts out the trap. Winski used his course experience to get out of a jam and set up a nice putt on the green.
JOSEPH ABRAHAM | DEMOCRAT
Previous Next
Posted Tuesday, August 4, 2020 12:00 am
Joseph Abraham - Co-Editor

CALLICOON -- Usually when referring to ‘comeback kids' in sports, you're talking about the underdogs. But that isn't always the case.

The team of Sean Semenetz and Joe Winski are no underdogs.

However, when trailing in both of their matches on championship Sunday, the duo dug deep to get the better of their opponents and capture their sixth Sullivan County Democrat Two-Man Better Ball crown as a team (Semenetz's seventh overall).

The 39th Annual Democrat golf tournament was blessed with three days of near perfect weather - albeit hot temperatures and a few drops of rain on Sunday did test the 128 golfers' stamina.

Competed over the par-71 Villa Roma Country Club championship course in Callicoon, the Democrat started strong on Friday as 64 two-man teams tested their skills in the qualifying round.

Sean Semenetz and Winski showed the field they meant business by posting a 66 on Friday, just one stroke off the low qualifying score of 65 by Corey VanKeuren and Hyatt.

The trail to the title

Using their years of experience at the Villa Roma, where both Sean and Joe played high school golf, they won two matches on Saturday by identical 5 and 3 scores to advance to Championship Sunday.

Here's where the ‘Comeback Kids' earned their keep.

First, they had to flip the script in the semifinals on Sunday morning as they trailed the team of Jake Hommel and Scott Kleeschulte, by two holes after 14.

Although both Hommel and Kleeschulte are college-aged golfers out of Kingston, their golf game is rock solid.

Hommel won the Democrat last year with David Powers by his side, but Powers is now an aspiring Golf Pro and had to forego the tourney this year.

Semenetz and Winski went on to birdie three of the last four holes to overcome the two-hole deficit and earn a trip to the championship match. Winski drained a nine-footer on their 18th hole of the match for the win in what Semenetz called by far, “the putt of the day.”

On the other side of the bracket were Kort Wheeler and Walter Herzog, who got the better of Ken Cohen (a nine-time Democrat tournament champion) and Maxx Kleiner, setting up a rematch of the 2018 Democrat finals, which Semenetz and Winski won in 17 holes. In 2018's showdown, both teams combined to score 15 birdies and one eagle.

Sunday's rematch was not as pretty, with both teams struggling at different times in the humid - and sometimes windy - conditions.

However the contest was a tad more competitive this time around as it ended on the final putt on the 18th hole.

Tale of the tape

Like in the semifinals, Semenetz and Winski found themselves in a jam. This time they were down two after four holes thanks to bogeys on one and three.

After tying the fifth hole, Wheeler and Herzog returned the favor and made bogeys on six and seven, giving back two holes and making the match all even. Wheeler and Herzog, winners of the 2015 Democrat, took the eighth hole as Wheeler's second shot, a towering 220-yard iron that landed just six-feet from the pin, set up an eagle putt. Winski and Semenetz conceded the hole but bounced right back as they won the par-3 ninth, evening the score at the turn.

Wheeler and Herzog won hole 10, but the tide would turn yet again when Semenetz birdied on 11 and 12, giving his team a one-shot lead.

The two teams tied holes 13 and 14 (although Herzog deserves props for a big putt he made to save his team on 13), before Wheeler birdied 15 with a nice six-footer, to once again tie the score. After tying 16, the final four walked up to the 17th hole, a 180-yard par-3 over water.

With wind howling across the fairway everyone hit their irons into the green, with Winski going just six yards long off the back.

After an amazing chip to a downhill green that left him a 12-putt for par, Winski left the putt just inches short.

Semenetz, knowing that both Wheeler and Herzog had good looks at birdies, tried to drain his 16-foot uphill putt into the back of the hole, but went three feet by.

Wheeler's and Herzog's putts both peeked in the hole but failed to drop and now, with nearly 40 golfers looking on, Semenetz need to make the three-foot down hiller to keep the match square.

He looked at the putt for long time, backing off once to look at it a final time, knowing the match stood in the balance.

With that he stroked the putt and it fell into the bottom of the hole as the gallery applauded the great effort.

Now the pressure was all on the finishing hole, a par-4 over water.

Three drives found the deep right hand rough while Semenetz stayed online and was the only golfer with a real shot at the green.

Both Wheeler and Herzog found tree trouble on their second shots, knocking down their arching irons before they could reach the green.

Semenetz put his second shot on the green, and Herzog followed suit with an amazing chip from underneath a tree, but he lay three.

Herzog and Wheeler went on to make bogey, and with the tourney on the line, Semenetz made the final two-foot putt for par, clinching the title for he and Winski.

“We always knew we were going to be OK,” said Semenetz when asked about how they orchestrated Sunday's two come-from-behind wins. “We just stayed patient. We are comfortable being down. We got lucky on the back nine and won a few holes.”

Semenetz spoke of the great respect he and Winski have for Wheeler and Herzog.

“We absolutely love those guys,” he said, “they are our boys. The whole day we were having fun with them.”

The admiration is mutual.

“If you had asked me Friday if I could play with Joe and Sean in the finals, I'd say, ‘sure anytime.' None of us played our best golf, but it was still a good matchup,” Wheeler said.

With the victory, Semenetz and Winski inked their names into the Sullivan County Democrat Golf Tourney record book even more.

Together they are the winningest team in Democrat tournament history, with six, and Semenetz, with seven victories, inches closer to Cohen's record of nine Democrat titles. Winski also holds the record of winning in every finals match he has ever played in.