I have fond memories from back in the 1980’s playing an arcade game named centipede, where you had to try and shoot to destroy the centipede before he could get to the bottom of the screen and … 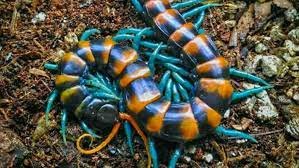 I have fond memories from back in the 1980’s playing an arcade game named centipede, where you had to try and shoot to destroy the centipede before he could get to the bottom of the screen and bite you.

These days there is another type of centipede that you need to be on the lookout for, that has just shown up not only in New York State, but in Liberty of all places. It is the rare, but extremely invasive, Siberian Centipede. Siberian centipedes were first discovered and identified back in the mid 1940’s in Siberia, Russia, just after World War II.

Not much was known about them because of the cold war that followed WWII and the shroud of secrecy around the Soviet Union. Then in the late 1970’s the first Siberian centipedes were discovered in the Yukon of Canada. Over the past forty years these invasive insects have crisscrossed Canada and Alaska.

The risk to humans is quite low due to our size, but household pets and backyard livestock are very much at risk. If you were to get bit by a Siberian centipede, you would get a raised red welt and possibly numbness around the effected area, but for pets and small livestock one bite can be fatal. The centipede that was found in Liberty was under an old doghouse that was being removed by a contractor doing work on a home that was recently sold a few months ago.

The contractor was amazed at the size and captured the centipede and brought it to the pet shop in Liberty for identification. Ryan looked up on the internet to see if it was one of the giant Asian centipedes that are sometimes sold in the pet trades but it didn’t match the identification.

So they contacted the Cornell Cooperative Extension and the contractor took it over to them on Ferndale Loomis road and now everyone was getting curious to see if this was a new species. The Cornell Cooperative Extension reached out to the entomology department at SUNY Albany and NYS DEC to confirm what their fear was, the centipede was indeed a Siberian centipede, the first ever known case in New York and in the lower 48 states.

These centipedes, like most centipedes, are nocturnal and do their hunting mainly at night, but that is not to say that they won’t bite someone that disturbs them during the day. Unsuspecting pets or backyard chickens curious about something moving in the leaves could quickly be face to face with a killer.

General lawn insectides will work to protect your lawn, but these insects like to hide under things like doghouses, chicken coops, bunny hutches, decks and anywhere where there is rotting or decaying wood. If you find a Siberian Centipede, report it immediately to the Cornell Co-operative Extension or the New York State Department of Environmental Conservation. Although these centipedes are interesting in color, with their black and copper stripes and blue legs, they are not to be kept as pets and should be reported immediately.

Once contacted, a DEC officer will show up to collect the sample. It needs to be noted also that male and female Siberian centipedes have stripes going in opposing direction, with the male brighter with stripes across the body and females with stripes down the body. Luckily the one found in Liberty was a male and further investigation of the area by the DEC found no other traces of a female in the area.

Neighbors of the house where the centipede was found were notified of the incident and advised to keep a lookout this summer for any other sightings. Flyers have also been put up around Liberty at stores and at the schools so that the community at large is aware of this dangerous insect. One last thing to remember about the Siberian Centipede, it’s April Fools Day and the Siberian Centipede doesn’t exist.