Many archeologists believe that the Munsee, a branch of the Lenape, a Native American tribe of Algonquin culture, may have lived along the banks of the Upper Delaware as early as 12,000 years ago, … 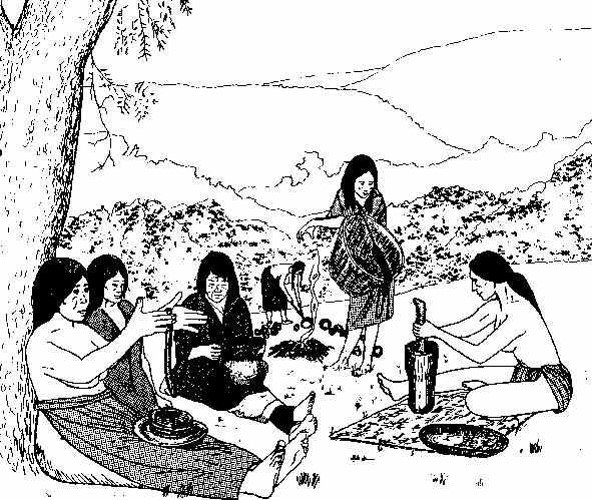 Many of the Lenape healers were women, who carefully gathered, prepared, and administered herbal remedies.
Contributed illustration
Posted Friday, September 3, 2021 7:00 am
John Conway

Many archeologists believe that the Munsee, a branch of the Lenape, a Native American tribe of Algonquin culture, may have lived along the banks of the Upper Delaware as early as 12,000 years ago, hunting, fishing, and eventually farming, growing corn, squash and beans. They held great council fires and annual green corn festivals along the Delaware River—which they called Lenapewihittuck-- and celebrated the region’s natural beauty and its healing qualities. They referred to the area as Lenapehoking— “land of the Lenape.”

Ongoing clashes with the more aggressive and populous Iroquois tribes to the north and growing tensions with the ever-increasing number of Europeans moving into the region prompted the Munsee to move westward, mostly abandoning this area by about 1730.

During their earliest visits, the Munsee constructed sweat lodges among the willow trees on the banks of the Delaware and utilized many of the plants that grew here as medicines. A prayer always preceded treatment, and a ritual was always performed prior to gathering plants for medicine making. A small hole was dug near the east side of the base of the plant and tobacco was placed into it to appease the spirit of the plant. This tradition is still practiced by members of the Lenape tribe (now usually referred to as the Delaware) today. A custom of prayer is observed prior to gathering medicine plants. Healers, many of them women, were always conservative and gathered only what was needed.

“The Indians know how to cure very dangerous and perilous wounds and sores by roots, leaves and other little things…as we are not skilled in those things, we cannot say much about them,” observed one of the first Europeans to interact with the Lenape, the Dutchman Adriaen van der Donck in 1650.

Swedish engineer Peter Lindstrom concurred, writing in “Geographia Americae” in 1656, that the herbal remedies of the Lenape people were “splendid and miraculous.”

And in 1702, Thomas Campanhius Holm wrote of the tribe that “their medicines seem very trifling, yet their effects are astonishing, and unless a man be truly incurable, they know immediately how to prescribe for him; but the remedies they employ they carefully keep secret from the Christians.”

Moravian missionary John Heckewelder concurred with that assessment. Writing around 1820, he noted that the Lenape “make considerable use of the barks of trees, such as the white and black oak, the white walnut, of which they make pills, the cherry, dogwood, maple, birch, and several others. They prepare and compound these medicines in different ways, which they keep a profound secret.”

In more modern times, some of the Lenape remedies have been confirmed by science to have medicinal benefit. The bark of the willow tree, for example, which the Lenape healers boiled in water to make a tea they administered to treats aches and pains, contains salicin, which is an active ingredient in aspirin.

The seeds of wild grapes were crushed and boiled by the Lenape to treat heart problems, and today grape seed extract is considered a powerful supplement for lowering blood pressure without prescription drugs.

Their mastery of herbal medicine is just one of the legacies that remain of the Lenape culture today. In this area, we are reminded of their flowery language by the proliferation of place names such as Cochecton, Kerhonkson, Mamakating, Wawarsing, Neversink, Minisink, and Shawangunk.

These place names typically include one of three suffixes, although because of the absence of a traditional written language as a guide, they are not always spelled consistently. Those suffixes are -unk (sometimes appearing as -ung, –onk or -ong); -ink (sometimes –ing); and –ack (occasionally –eck).

While the common use of these suffixes to designate “places” makes it fairly easy to identify place names derived from the Munsee language, accurately translating them is much more difficult.

The –unk suffix (and its variants) seems to typically apply to mountains, cliffs, or lofty places, such as Shawangunk and Equinunk. Place names that end in the –ing suffix or its variants, are typically low lying areas, valleys, or streams. In this category we find Minisink, Neversink (originally Navasing), Mamakating, Papakating, and Wawarsing. Munsee words ending in the –ack suffix are also typically valleys or streams, such as Walpack, Paupack, Homowack, Lackawack (and Lackawaxen), and Mahackamack.

These are just some of the topics to be covered in detail when the Livingston Manor Free Library hosts the program, “The Lenape: Their Language, Their Culture, Their Legacy” presented by the Sullivan County Historian at 6:30 p.m. on Thursday, September 9. Call the library at (845) 439-5440 for more information or to register.

John Conway is the Sullivan County Historian. Email him at jconway52@hotmail.com. He will present the program, “The Lenape: Their Language, Their Culture, Their Legacy” at the Livingston Manor Free Library on Thursday, September 9.