SLATE HILL - Matchups between rival schools often favor one over the other. Those imbalances can be a factor of any number of things including size, experience, … 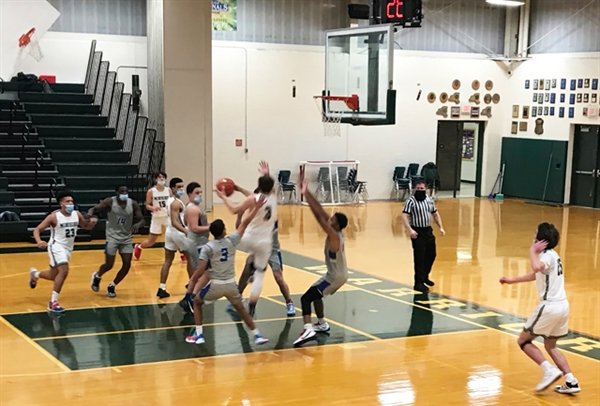 SLATE HILL - Matchups between rival schools often favor one over the other. Those imbalances can be a factor of any number of things including size, experience, depth, free throw shooting acumen, fouls and above all else, style.

For Monticello, a team that wants to run the floor, their problem with the Minisink Warriors hinges on both style and experience. The Warriors are a veteran team that returns three starters, three key reserve players and have added a dynamic transfer from Long Island who is quite talented.

Minisink wants to slow the pace of the game down and make it a half-court encounter.

As Monticello Coach Chris Russo notes, “that's tough to defend all night. We did well at times defensively and on the boards but they are tough to defend and move the ball around very well. They dictated the pace of the game and we aren't built to win games in the 40's. We made it a three-point game with under two minutes to go but we couldn't get the needed stops or scores.

“The game was competitive with ups and downs for both teams, a mix of good and sloppy play,” Russo continued. “We came a little unglued as we got frustrated with how the game was going.”

Monticello led 12-11 at the end of the first quarter. Julian Velasco had five of those points including a trey. Jalil Jones had four and Jordan Ruggiero posted two. The game was tied at the half at 24-all. Ruggiero had five and Jones had four in the frame.

M-V outscored Monticello by two points in the third quarter as the game remained tight but the Warriors pulled away in the fourth outscoring Monticello 12-5 down the stretch.

Ruggiero led the Panthers with 14 points, Jones netted 12 and Velasco had 10.

The Montis 1-1 (1-1) were eight-for 15 from the strip (53 percent). The Warriors were paced by Alexander Kupinski with 14. They had eight players score in the game to six Montis who tallied points.