Terry Grafmuller of Woodbourne and his wife Theresa are planning to jump into Berean Lake on March 12 as Subzero Heroes.

Now in its 12th year, the fundraiser for the … 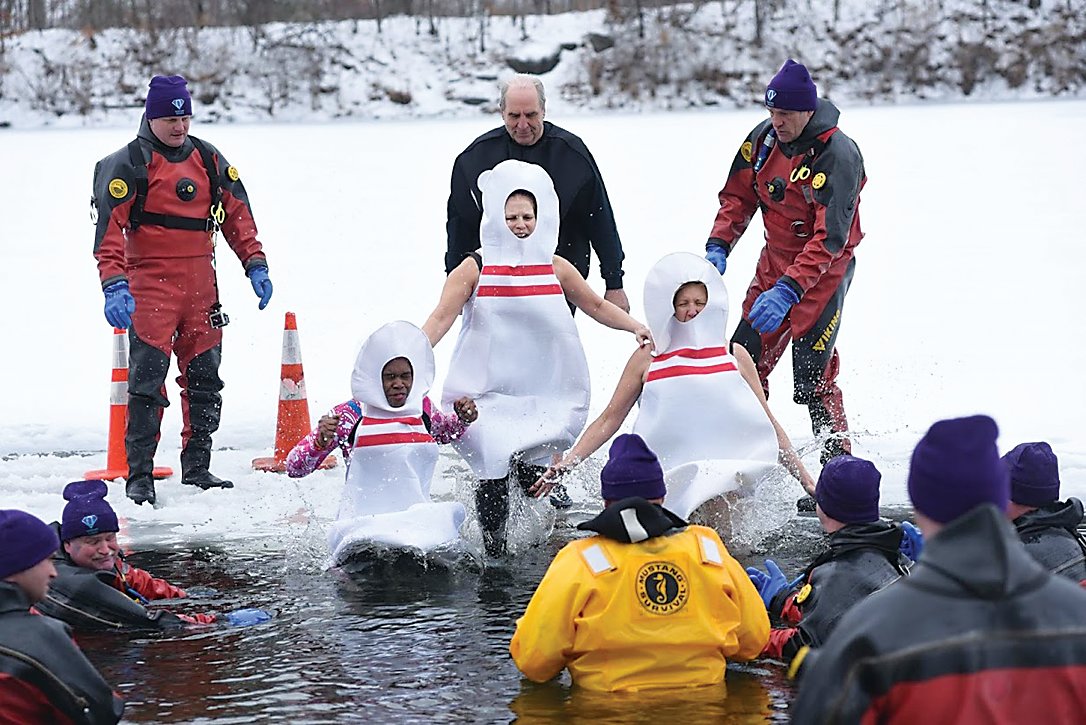 Team Strike Out Alz raises money to assist the Alzheimer’s Association Hudson Valley.
Contributed photos
Previous Next
Posted Friday, March 11, 2022 6:10 am
UPDATE: Due to Saturday's inclement weather, the Subzero Heroes event has been rescheduled for Sunday, March 13. Registration will open at 9:30 a.m. with jumping starting at 11 a.m.
Terry Grafmuller of Woodbourne and his wife Theresa are planning to jump into Berean Lake on March 12 as Subzero Heroes.
Now in its 12th year, the fundraiser for the Alzheimer’s Association Hudson Valley Chapter involves jumping into a lake to raise money for the cause. Participants must raise at least $200 to jump into the water as Heroes, or they can register as Sidekicks, who don’t jump but help Heroes raise money and recruit team members.
Registration is open at subzeroheroes.org.
The event, which is usually held in early February, was originally scheduled for Feb. 5 but rescheduled when high cases of the Omicron variant were causing concern.
Now in his eighth year as a Subzero Hero, Grafmuller said he has jumped under a variety of conditions through the years.
“We’ve had to jump with no ice, even in February. People always ask how cold it is. You’d have to have it over 32 degrees or there would just be solid ice,” he said.
He said jumping initially involved a bit of a learning process for him and his wife.
“Our first year that we jumped, we didn’t know what to expect. We learned the less clothes, the better,” he said, noting that he doesn’t recommend prepping for the jump, but just braving the cold on the day of the event.
“Other team members asked us, should we start taking cold showers? You don’t want that pain any more than you have to. Just take that pain that day,” he said.
Culinary Institute Chef Scott Swartz and his students will be on site at Berean Lake with gourmet soup for participants, and hot chocolate with marshmallows from Hudson Valley Marshmallow Company will be available.
As in recent years, there will also be a costume contest, so Heroes are invited to get creative with their attire.
Grafmuller jumps as part of the Team Strike Out Alz, who wear costumes with a bowling theme. Most of the team members dress as bowling pins, and he is the bowling ball.
“It’s just a black ball, and my arms stick through it, and it’s got three holes,” he said, adding that the costumes are easy to get out of, which is important when you’re jumping. “The pin and the bowling ball come off pretty easy, and you’re in.”
So what drives him to return to the frozen lake every year? Grafmuller knows from personal experience how devastating Alzheimer’s can be. He said his best friend, Hal Stoble, a former IBM engineer and Vietnam veteran, passed away from the disease about two years ago.
“It was disheartening. It started with dementia, and it progressed to full-blown Alzheimer’s. The last time I saw him, he said, ‘Next time I see you, I won’t know you.’ I just saw the deterioration when he couldn’t be part of a conversation anymore. He didn’t have any memory to be engaged,” he said.
Despite the travel involved from Sullivan County to Highland and the discomfort of going into the icy water, Grafmuller said he feels committed to being a Subzero Hero.
“It’s never crossed my mind not to do it. It’s what I consider a lifelong event. Every year as we are waiting in line to do the jump, my wife says, ‘We’ll never do this again,’ but every year we do it.”
He praised the teamwork that brings the event together.
“It’s a well-run event. We’ve always been impressed by the organization, everyone working together, between the sheriff and volunteers,” he said.
He also likes the event’s original take on a popular fundraising concept.
“People talk about polar plunges, but this is a little different. It’s unique compared to that,” he said.