Put it in the books! History made after a perfect tee shot on the 302-yard Par 4 (8th) hole resulted in an amazing golf shot that resulted in an albatross, a hole-in-one on a par four, at the … 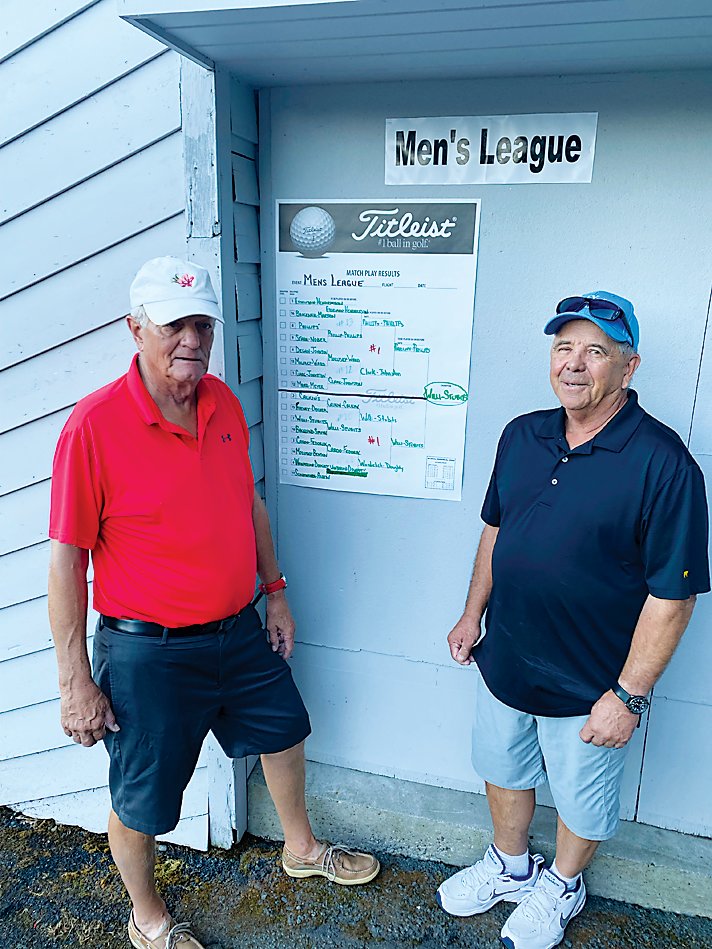 Tuesday night champs at Villa Tom Willi, left, and John Stubits were the champions of the Tuesday night league at Villa Roma Country Club with their win over Bill and Ryan Phillips.
Contributed Photo 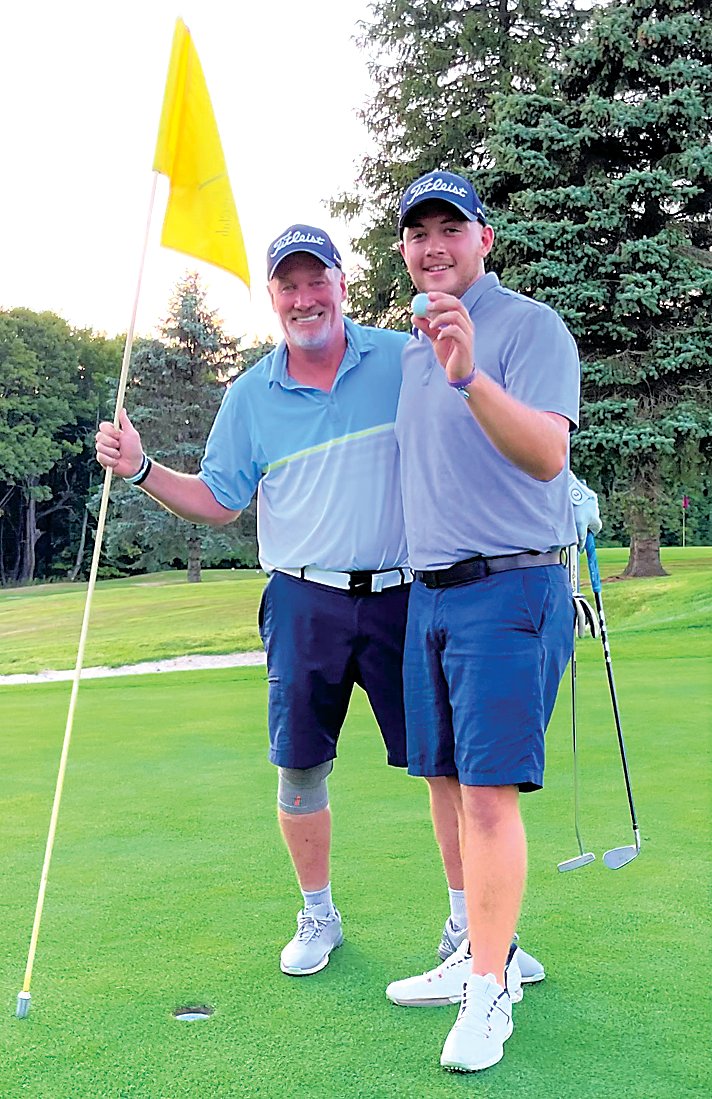 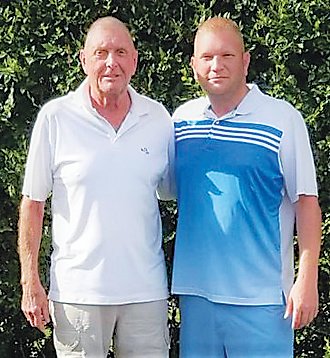 Champions of the Twin Village Golf Course Monday Night Men’s League for the fifth year in a row are the father and son duo of Chuck Husson III, left, and Chuck Husson IV.
Contributed Photo 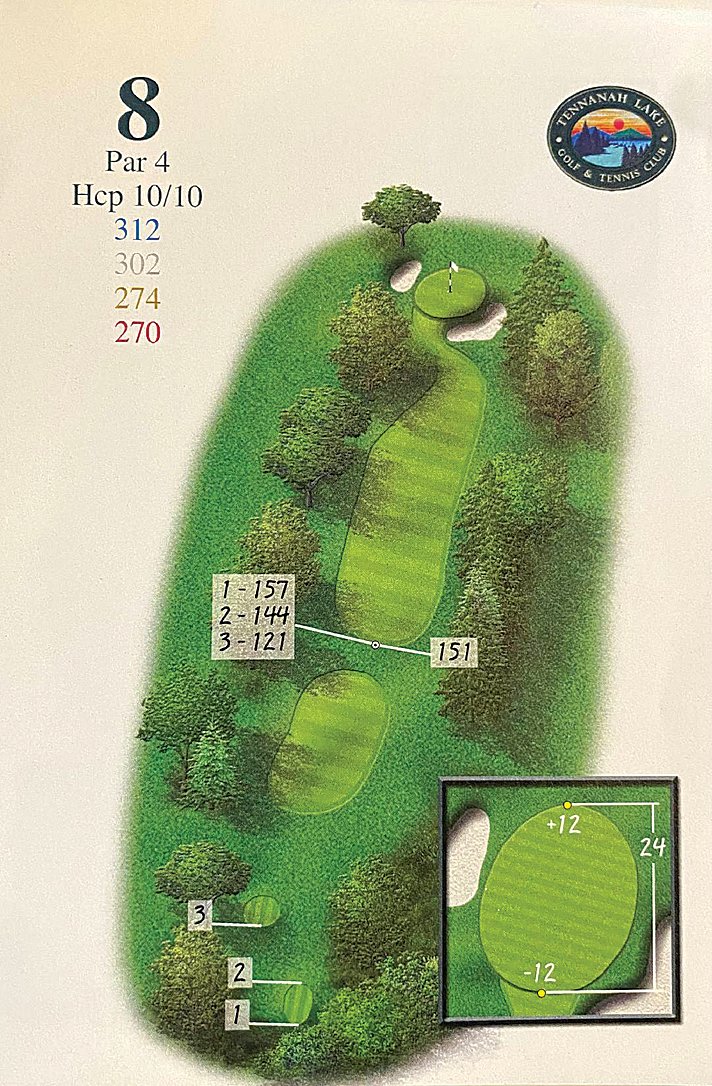 The diagram of the par 4 (302) yard 8th hole at the Tennanah Lake, where an albatross, one of the rarest shots in golf, was scored by Roscoe Golfer Collin Tallman.
Contributed Photo
Previous Next
Posted Friday, September 2, 2022 6:30 am
Ed Townsend

Put it in the books! History made after a perfect tee shot on the 302-yard Par 4 (8th) hole resulted in an amazing golf shot that resulted in an albatross, a hole-in-one on a par four, at the Tennanah Lake Golf & Tennis Club.

Saving the best for the last is what 25-year-old Roscoe golfer, Collin Tallman, did on August 25 while playing in the last night of the regular season at Tennanah Lake Golf & Tennis Club Thursday Men’s golf league.

According to the Tennanah Lake Golf Club league management, Tallman was playing with his golf league partner Tom Roseo against the team of Paul Degan and Steve Strauss.

As Tallman and the foursome approached the 8th tee, Tallman, who has been a 0-handicap golfer all season, hit his driver off the white tee towards the eighth green, which golfers can’t see from the tee box area.

Although nobody could see what happened when the ball got on the green, it appears that the ball must have taken a favorable bounce before reaching the cup, as the 8th green cup is located a bit left of the center.

According to golf club management the distance from the white tees to the 8th green cup is 302 yards and slightly uphill.

Jim Furyk has been among the most respected PGA Tour veterans for decades, a past member of the Policy Board and is now hosting a PGA Tour Champions event.

He’s seen the ins and outs of running the Tour under two commissioners and is among the most thoughtful, insightful players during his career.

Furyk said the recent court case where three players were denied access to the FedEx cup playoffs after being suspended by the Tour was on sound legal footing.

Furyk added, “they can’t have it both ways. I’m happy for the tour, it helps us as an organization.”

One of the most overlooked aspects in the game of golf is called “course management.”

There are two different components that control the game of golf, mental and physical.

Course management falls under the mental side of the game. Golfers of all ability levels can learn to shave strokes off their game by thinking.

Even the greatest golfers in the world hit errant shots occasionally.

While some of them make fantastic miracle shots to get out of trouble the smart play is forgotten because it does not make the highlight reel.

I see golfers try to hit shots they are not capable of, and it ends up costing them strokes instead of saving them.

If you use good course management, sometimes it is better to pitch out to the fairway and then hit to the green.

When you are playing a par 5 you may want to lay up with your second shot and then try to make a birdie by using a good wedge game.

If you find yourself in trouble on the course, make sure you go through all your options before your hit your shot.

By using good course management, you can keep a big number on your scorecard.

You may feel like you are giving up but sometimes a smart safe play will save you strokes and improve your score.