Twenty-year-old Jonathan (J.J.) Wilhelm Jr. is into his fourth year of bowling two-handed and the progress he is making with the Belmonte Style of bowling paid off big time, September 28, in the … 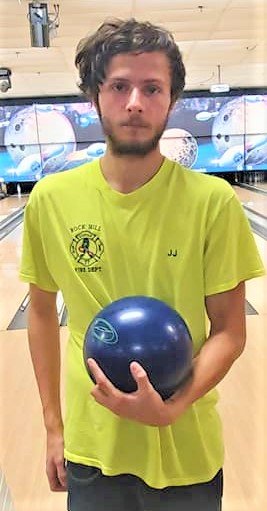 Twenty-year-old Jonathan (J.J.) Wilhelm Jr. is into his fourth year of bowling two-handed and the progress he is making with the Belmonte Style of bowling paid off big time, September 28, in the Kiamesha Lanes Tuesday Mixed Firefighter league, when he recorded his first 800 series, an 802 off single games of 269, 276, 257.

J.J. noted that he just started using two-handed bowling for spares on the right side of the lane, and after using this style for a year, switched to two hands permanently for all his bowling.

In the three game 802 series, the effectiveness of the two-hand style of bowling, particularly when entering the strike zone, saw J.J. with 9 strikes in the first game, 10 strikes the second game and 7 strikes in the third, for a total of 26 strikes in this three game series.

This 802 series was bowled on lanes 11 and 12 using a Storm Fast Pitch bowling ball with the Rock Hill Fire Department #2 team and team mates Tom Belgiovene, Kyle Giordano and his dad, Jon Wilhelm.

This is J.J.’s first 800 plus series and he has two 300 games in the record books. He bowls in two leagues, the Monday Men’s and the Tuesday Mixed Firefighter, both at Kiamesha Lanes and maintains a 235 average on Monday and a 239 on Tuesday.

Jonathan is single, has no children and is employed at Monticello Shoprite.

“The talent on the collegiate level is at an all-time high,” said PBA Tour Commissioner Tom Clark. “While current collegiate rules prohibit active players from joining the PBA, this new rule offers more opportunities for them to compete at the highest level of the game. PBA fans, players and tournament hosts will benefit, and it will help collegiate players make a smoother transition to PBA membership once their college careers are over.”

How many people are thinking about or actually following safety guidelines while at the bowling alley?

Bowling safety is a topic that is not on many people’s minds when they enter the alley. There are so many ways in which you can get hurt while bowling.

First, when you are just walking around, you should make sure of where you are. You should never be behind a person that is swinging a bowling ball.

While bowling, you should be the only person standing on the approach to the lane.

If there is someone in a lane next to you then you should wait, because some bowlers tend to take off to the sides after throwing their ball and do not realize that they have walked into the next lane.

It is absolutely necessary that you properly warm up before starting to bowl. It will prevent you from getting strained muscles.

Ensure that you are wearing proper footwear, and any bowler will want their own properly fit bowling shoes.

Be aware of any liquid on the floor. This could lead to sudden painful stopping or slipping.

Always pick up your bowling ball with both hands, as this will reduce strain by at least 50%.

Make sure you stay behind the foul line as the area after that is completely oiled.

Be alert while bowling. Safety should be considered at all times.