‘We will not leave anyone out in the cold’

MONTICELLO –– As the opioid crisis rages on, frustration has mounted as community members and leaders have watched the death toll continue to rise. But as local, state and elected …

‘We will not leave anyone out in the cold’ 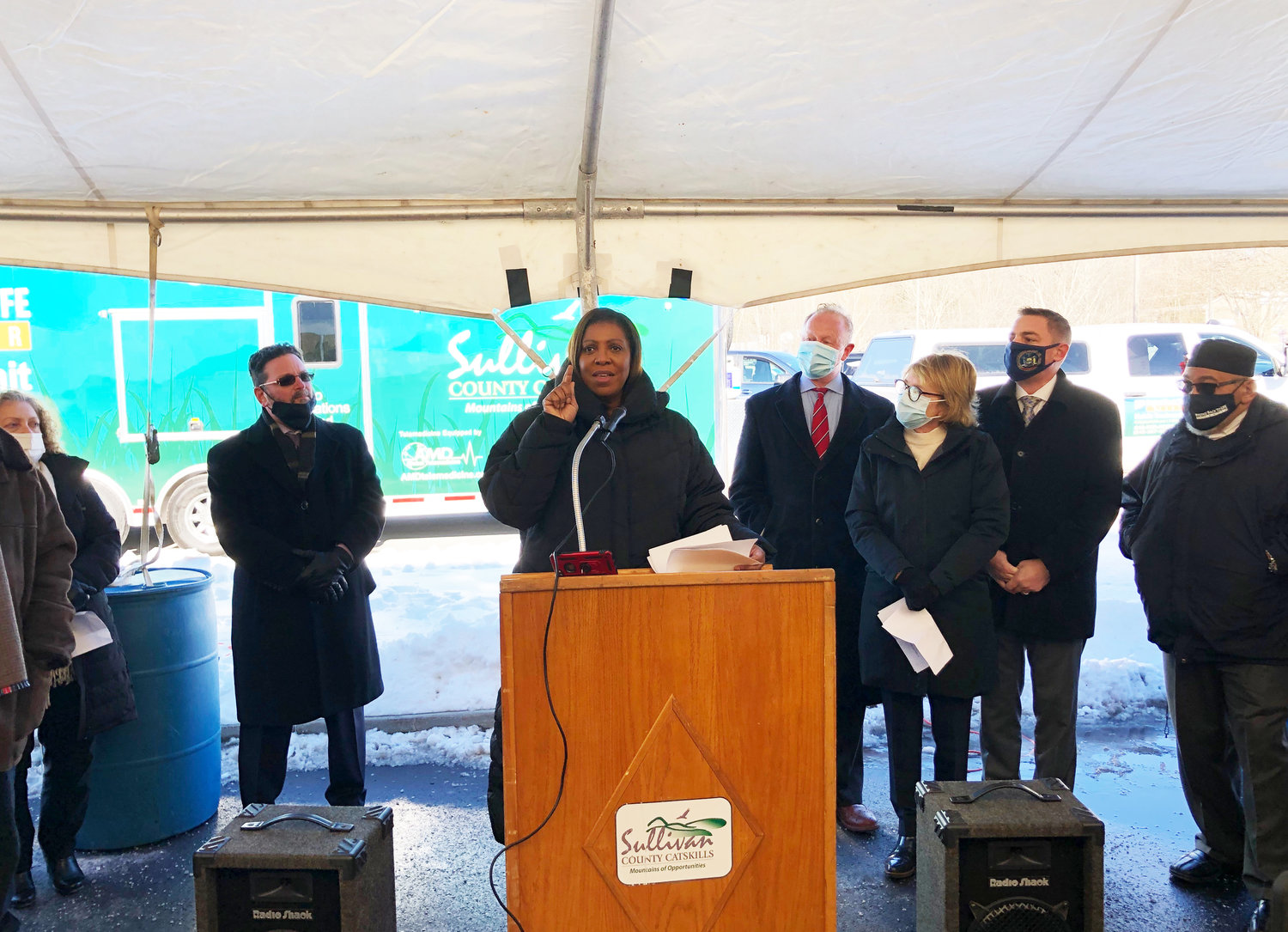 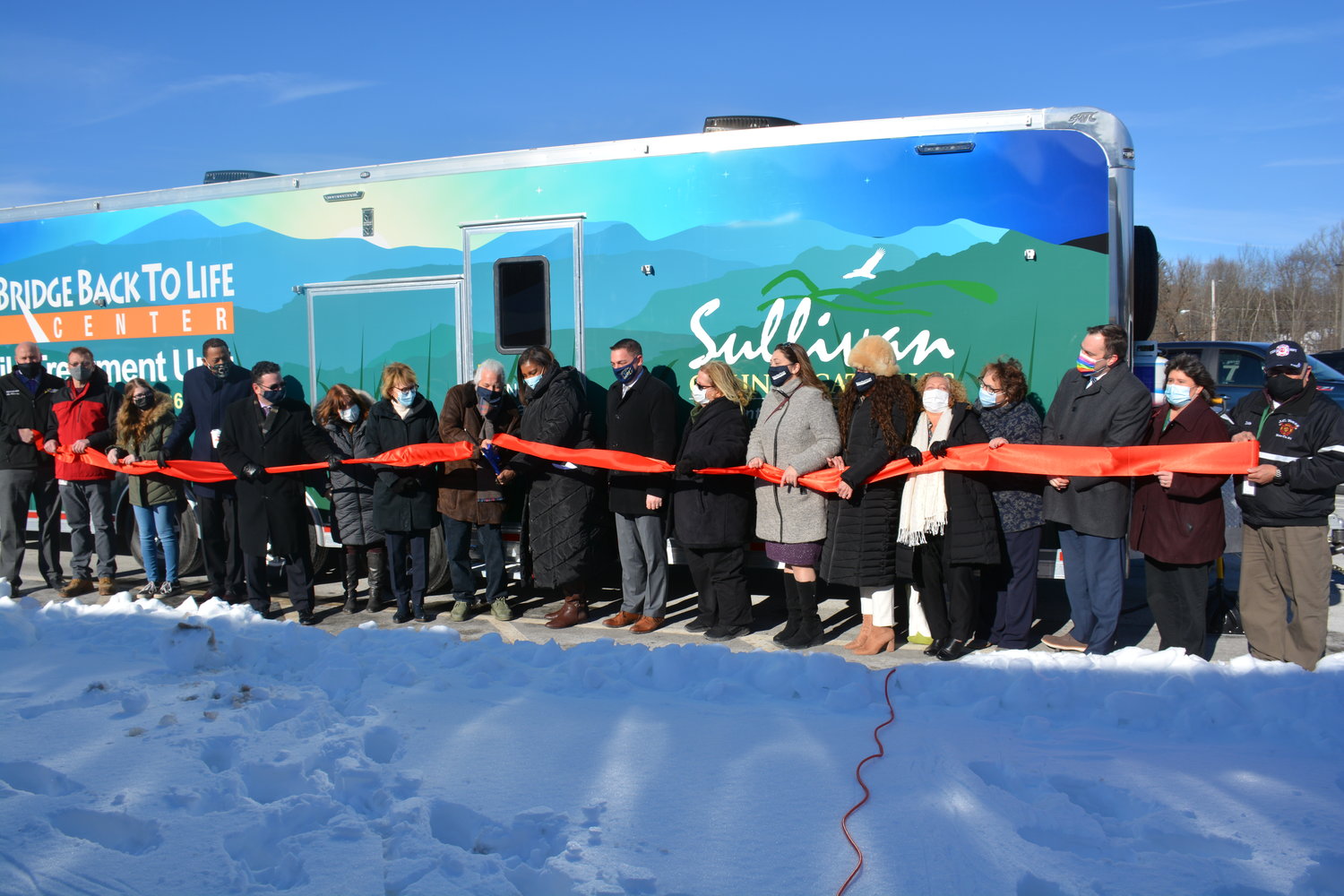 Local and state officials were on hand for a celebratory ribbon cutting on a new mobile health treatment unit on Thursday.
Joseph Abraham | Democrat
Previous Next
Posted Tuesday, January 25, 2022 5:33 am
By Joseph Abraham

MONTICELLO –– As the opioid crisis rages on, frustration has mounted as community members and leaders have watched the death toll continue to rise. But as local, state and elected officials, including NYS Attorney General Letitia James, gathered outside the Government Center on Thursday to cut the ribbon on a new mobile health unit which will bring medical and substance use services to communities across the County, the common thread was one of hope.

The Department of Community Services has contracted with Bridge Back to Life Center, Inc., who have provided outpatient treatment to recovering individuals as well as education and support for their families and significant others since 1988, on the mobile health unit. Sullivan County will have priority use of the unit as part of its comprehensive package of services currently offered to those dealing with substance use and other health issues.

“This really is a blessed day, but it comes after a long night of suffering and loss,” said James. “Too many lives have been shattered, so many lives have been destroyed by opioid drugs, and make no mistake about it, the opioid crisis was caused by corporate greed … Over the past two decades around three quarters of a million Americans have died from overdoses. During this pandemic … we lost so many individuals from drug overdoses because of social isolation, and Sullivan County has been amongst the hardest hit in the entire state of New York.

“You've all been on the frontlines and I want you to know that I'm using the law and the powers of my office to protect you from the poisons of opioids,” she continued. “I want all of you to know that help is coming. Help in the terms of money is coming to support all of the great organizations and all the not-for-profits and to provide much needed raises to individuals who work in human services, which is so critically important.”

James, when mentioning the settlements from the State’s lawsuits against several drug manufacturers and distributors, said Sullivan County will be receiving approximately $1.7 million. She called the opening of the mobile treatment unit the start of a new chapter of healing for Sullivan County.

“This is really about believing in hope,” said James, “and using hope to restore [and] to believe in second chances for all of those who are struggling with addiction.”

Feldman, a Bethel resident and longtime healthcare professional who is partnering with Bridge Back to Life Center in this venture, said the mobile unit will target the most rural areas of the County, bringing Medication-Assisted Treatment (MAT) to combat the opioid epidemic in communities that haven’t had adequate access to services.

He also spoke about how the opioid crisis has affected local youth.

“Too many kids have died here .. and we're tired of it. So hopefully, this will save lives,” said Feldman.

The 32-foot-long, fully heated and air-conditioned mobile health unit, which was wrapped in bright signage by a team of Sullivan County BOCES students, will be staffed by a nurse practitioner licensed to prescribe MAT and render a variety of general healthcare services, along with a Certified Peer Recovery Advocate who will assist patients in securing needed social services. A Clinical Social Worker is anticipated to be added to the team in the future.

While speaking to those in attendance, Rajsz praised the work of the Division of Health and Family Services, which she said, “doesn’t ever rest in responding to this crisis.”

“In addition to the incredible work of our Drug Task Force, we offer on our website a complete list of substance use service providers, from healthcare groups to support groups, including an interactive map,” said Rajsz. “We have a ‘Hope Line’ (866-832-5575) where anyone can call, 24/7, to get the help they need at the time they need it. We have personnel trained to provide Individual Psychotherapy, Marital & Family Counseling, Group Therapy, Medication Therapy, Crisis Intervention/Outreach, and Medication Assisted Therapy. We don’t leave anyone behind and we will not leave anyone out in the cold.”