What's in your fly box?

We've had some great weather lately - a few very warm days, and a couple of nice cool sleeping nights right around the Strawberry Moon that occurred on Friday and Saturday.

It's good to see trout …

What's in your fly box? 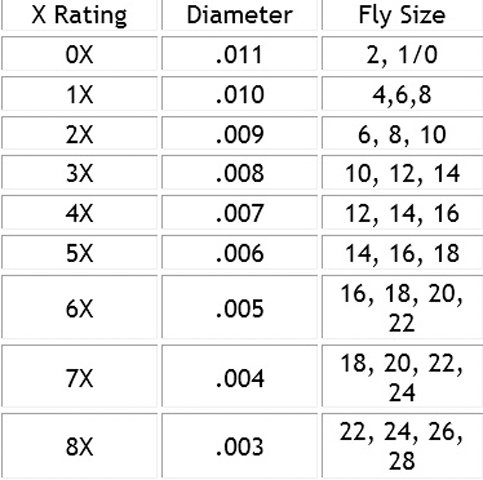 It's important to match your tippet size to the size of the fly (hook) you're fishing. Keep this chart in your fly box.
Contributed Graphic
Posted Monday, June 8, 2020 12:00 am
Judy Van Put - Columnist

We've had some great weather lately - a few very warm days, and a couple of nice cool sleeping nights right around the Strawberry Moon that occurred on Friday and Saturday.

It's good to see trout fishers out and about on our rivers and streams; we are in “prime time” now, with a whole spate of the best major fly hatches occurring. We've often been asked to predict when the best time for fly-fishing is, and we would reply the end of May/beginning of June. Fly hatches that are or should be occurring this week include March Browns, Grey Foxes, Caddis, Sulphurs, Blue-Winged Olives, Green Drakes, Isonychias.

For someone starting out in the sport, it can be a bit daunting, if not overwhelming, to choose which flies to carry along to fish with; and so I asked my husband, Ed Van Put, if he would share with us some of his thoughts on flies and, when fishing the Catskills, which ones are included in his fly box. Ed has fly-fished for more than 60 years and has a ton of experience and knowledge of which flies are important and which are not. His suggestions as to what everyone should have in their fly box follows:

His first choice is an Adams. The Adams is, overall, a blue-gray pattern. Many of the hatches, particularly in early summer but also including those that will continue on throughout the season, are slate or blue-gray in color, including the Hendickson, Isonychia and Blue-Winged Olive; the Adams works well for any of those hatches. Carry the Adams in sizes #18 - #12: with #18 for the Olives and #12 for the Isonychia; size #14 works well for Hendricksons.

Ed suggests carrying the Hair Wing Royal Coachman, or Royal Wulff, in sizes #14 and #12: these are known as attractor or searching patterns. There are many days when fish are not rising, nor are there any hatches to be seen. You can fish a Royal Wulff on such days, concentrating at the heads of pools and fast water that has depth to it; this fly will bring fish up to the surface. One of the good things about this pattern is its float-ability and its visibility - you can cast it in fast water, see it immediately and be able to follow it down in the current.

Another must-have pattern is an Elk Hair Caddis. Like the Royal Wulff, it is an attractor or searching pattern. Its effect is similar to a Royal Wulff, in the sense that when nothing is going on, you can switch to an Elk Hair Caddis and fish the same places - at the heads of the pools and in the fast water - and it's easy to see. In addition, a down-wing Elk Hair Caddis provides a different profile or shape, than the typical upright-wing mayfly imitators.

In fast water, fish have to make up their minds more quickly and they're easier to fool - and as a result, you need to be quicker in setting the hook, and you have to be able to see when the fish takes the fly. Trout in fast water are more opportunistic as the food passes them by quickly; having good visibility and quick reflexes enables you to be ready for a strike.

One fly that Ed would encourage us to use is the Able Mabel, saying that it is a very good pattern for when March Browns are on the water. The March Brown is a large fly, a strong hatch, and a favorite of dry fly fishers, and is one of the few hatches where it is important to fish a fly that more closely resembles the natural - the Able Mabel, in sizes #12 and #10, does a good job of matching the March Brown.

Generally, exact imitation is often unnecessary; you just need to be close in size, shape, and overall color - meaning light, medium, or dark.

You should also carry a few patterns in very small sizes - #20s and #22s, for the time of the year when fish are midging or taking microscopic-sized flies that are difficult to see. And while a #22 may seem ridiculously small, and you're thinking ‘how am I ever going to see the fly,' often fish rising to midges are very consistent: they hold their position and come up and take, then come up and take again in the same location.

If you're across from the fish and can estimate how far away the fish is, you really don't need to see the fly, but just time your cast to the fish - and if you think he's just taken your fly, raise the rod and set the hook - and chances are good you'll take the fish even without seeing the fly.

Although Ed certainly carries other flies in his vest, he believes that these patterns and sizes are the most important to bring along every time you go fishing.

And lastly, it's important to match your tippet size to the size of the fly (hook) you're fishing. As indicated in the chart below (which is also a good addition for your fly box) there will be some overlap. If you're fishing a size #22 and using 6x, for example, and the fish aren't taking your fly, sometimes switching to a 7x tippet will prove to be productive.