Some fishing is said to be better than others, but from this trout fisher's view, there is no such thing as “bad” fishing! From time to time when meeting and getting to know someone, the question … 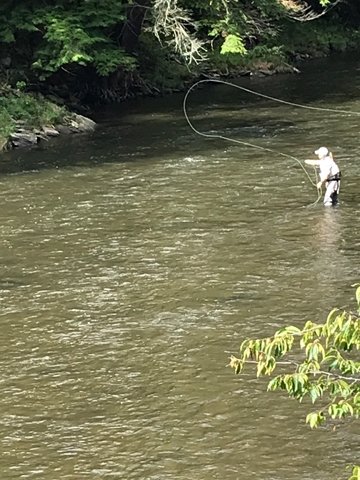 Fly-fishing is not difficult to learn; similar to riding a bicycle, it just takes practice. Strength is not required, but rhythm and timing is necessary for an accurate cast.
Photo by judy Van Put
Posted Monday, October 5, 2020 12:00 am
Judy Van Put - Columnist

Some fishing is said to be better than others, but from this trout fisher's view, there is no such thing as “bad” fishing! From time to time when meeting and getting to know someone, the question of favorite pastimes arises, and the subject of fishing comes up. If the person hasn't, or doesn't fish, they will often ask why some anglers choose to fly-fish, and what's the difference between fly-fishing and regular fishing?

I grew up following in my father's footsteps, so to speak. He loved to fish and therefore, so did I. From as far back as I can remember, we fished in streams close to home; my earliest recollections when we lived in Sundown and then Grahamsville was fishing for trout in Sundown Creek and the Rondout, and for pan fish in the Rondout reservoir; canoeing and fishing in the BashaKill; family camping and fishing trips to Beaverkill, Little Pond and Mongaup Pond campsites, as well as the Adirondacks and fishing the AuSable and the Sacandaga reservoir, today known as the Great Sacandaga Lake.

Those fishing trips provided a good education on where and how to catch fish; in those days my Dad and I fished with spinning rods. He also used an Orvis fly-rod which he prized and told me was special - and it was only when I was older that he let me try my hand at fly casting. After I graduated from Cobleskill college with a major in Fish and Wildlife technology, and found a job in the Bureau of Fisheries for the DEC in New Paltz, I met Ed Van Put, who taught me to fly-fish, and became my husband.

There was something magical about fly-fishing - for me it was more an art form than a sport. Fly-fishing is considered to be a more challenging and therefore more rewarding method of catching fish. It involves trying to entice a fish to take a lure that is hand-made - an imitation of a natural fly made of fur, feathers, perhaps some tinsel, carefully tied with gossamer threads onto a hook - rather than offering bait which, in many instances, is swallowed so deeply that it's difficult to remove without injuring the fish.

The fly itself is a work of art; it is tied on to extremely fine monofilament tippet. The tippet is attached to a leader, then a graduated fly line. The act of casting the line through a beautifully supple, long fly-rod, especially one made of bamboo, is also an art. Fly-fishing is, for many, a life-long activity. There are a number of facets involved; however, learning to fly-fish is not difficult.

Similar to riding a bicycle, there are bumpy starts and stops, sloppy casts and tangled lines, but once you master the rhythm and timing, you've got it! It does not involve a lot of strength; (which is why women can cast as well as men) rather, timing and coordination and ‘feeling' the line as it passes overhead. Whether you decide to focus solely on casting well enough to catch fish, or go a bit further into trying your hand at tying a fly, or making a leader, or even building a fly-rod (the Catskill Fly-Fishing Center hosts a Rod making workshop each year - visit cffcm.com) fly-fishing is an exciting and rewarding and beautiful pastime in which to get involved.

It has been said that there are more books written about fly-fishing than any other outdoor subject; there are a number of classics from as far back as Dame Juliana Berners' A Treatyse of Fysshynge Wyth an Angle, first published in 1496, for many years thought to be the earliest written work that provided fly-fishing instruction, to Izaak Walton's The Compleat Angler written in 1653, to Norman Maclean's A River Runs Through It published in 1976 and adapted into the award-winning drama film directed by Robert Redford in 1992.

Heading into the end of the warm weather fishing season and thinking of the long nights and cold winter months ahead, there is plenty of time and opportunity to do some research and reading - and maybe by spring you, too, will be hooked on fly-fishing!