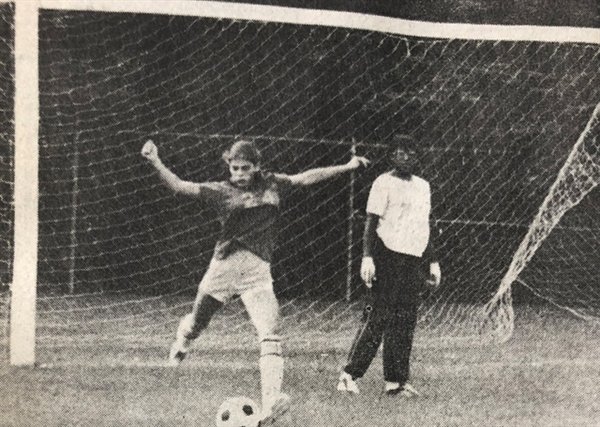 Karen Manzolillo lets go with a flying goal kick as Dawn Cooper looks on during action at Friday's Jeff-Y, DVCS soccer match. Jeff-Y came out of the contest with a narrow 2-1 victory, in a game which featured many outstanding defensive plays.
Democrat File Photo by Frank Brownell
Posted Monday, September 14, 2020 12:00 am
By Frank Brownell

JEFFERSONVILLE - In a hard fought game played Friday afternoon, the Jeffersonville-Youngsville girls soccer team nipped Delaware Valley 2-1, scoring what proved to be the winning goal in the first of two overtime periods.

Jeff-Y seemed to have a slight upper hand in the first half but was able to manage only one goal, by freshman Dawn Meyers, for a 1-0 lead at the half.

Delaware Valley appeared to have trouble moving the ball well, due in part to the fact that this was their first game. Jeff-Y had previously played two games.

The game then went into overtime, with the winning goal coming on a nifty shot by senior Jean Schmidt, who hit the upper right hand corner of the net with a beautiful kick from the left side.

The remainder of the game was much like before, with action going from the end to end of the Jeff-Y field, but neither team was able to score again.

The game featured good goal tending on the part of All-Star Kim Coots of Jeff-Y and Dawn Cooper of DVCS, who was playing her first game in the net.

Coots, according to first year coach Janet Barner, was “instrumental” in keeping Delaware Valley from the goal. Time and again she was able to thwart the DVCS offense with her long kicks from the goal line, often soaring the ball well past mid-field.

Cooper received a lot of help on defense from halfbacks Katrina Roeder, Barb Mudge, and Jane Ziegler. Delaware Valley coach Jane Buddenhagen also had praise for the play of Karen Manzolillo, who consistently prevented Jeff-Y from getting too close in its 38 shots on goal.

Barner had kind words for the play of Coots, senior Jean Schmidt, who took 11 shots on goal, and Renee Leroy, who took 10 shots, Tammy Fulton was also mentioned as having a big hand in the outcome of the game, which obviously pleased the new coach.

Both teams were quite well matched, and though appearing tired at the end of the game, when the final whistle sounded, neither side had let up.

Action was halted several times during the last part of the game due to injuries caused by the hard play of the girls. Fortunately, no one appeared seriously injured, but if the first game of the season is any indication, it's going to be a close race in the WSL Soccer League this year.