A look back at sports: ‘Twelve Angry Men'

A look back at sports: ‘Twelve Angry Men' 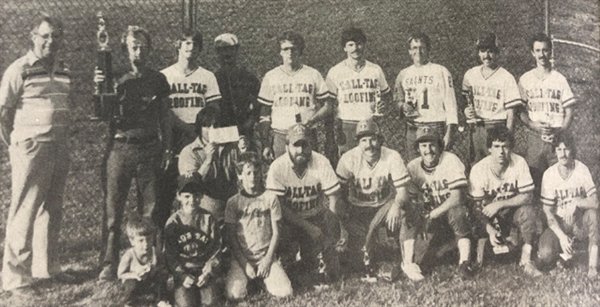 Call-Tags, of Liberty, the champions of the tournament and now the number one ranked team in the county, entered the two-day affair in a rage.

They had just lost three of four games in the Liberty league including the decisive game for first place, saw their undefeated season go down the tubes, and dropped two in a row to arch rival Goody's. More over, they were miffed by all the attention the Western Sullivan teams were getting in this paper. Not only were they angry but hungry to boot.

But what better way to whet their appetite and mellow their anger than to win the county championship. Not much according to manager Gary Green.

“We came here with one thing in mind - win,” Green said.

“We wanted to win this tournament so badly, that we were going to forfeit our scheduled 6:30 playoff game in Liberty,” Green added.

It's more than fitting that a first year team came out victorious in the first Democrat tournament.

The owners of Call-Tag's Roofing, Ron Call and Jimmy Taggart sponsored the team in the Liberty League for the initial time this year. The expansion team exploded on the scene, winning its first 12 games and capturing the hearts of the Liberty softball tetanics.

The brothers Taggart, Andy Willie and John, all notorious for their torrid hitting at Livingston Manor Central School, at one time moved over from the now defunct Place team in Liberty and Call-Tags had the All-Star nucleus they needed. Add the powerful Gary Green, surehanded second baseman Ron Bernhardt and hard-hitting Phil Fanning to the squad, and Ron Call and Jimmy Taggart had the dream team they had envisioned.

Break Out of Slump

The dream team played more like a nightmare the past two weeks, mired in a bad hitting slump. But they broke out of it in potent fashion in this tournament, banging out 50 hits in four games, including five homeruns over the fence at White Sulphur Springs field. The round-trippers went to all the Taggarts and Phil Fanning. Gary Green didn't park one, but did contribute to the hitting attack with eight hits in 15 times at bat.

More than anything else a championship team must show poise when trouble starts brewing. Call-Tag's possesses this poise and demonstrated it twice Sunday during the tournament.

In the semi-final game against Hankins House, Hankins House scored four runs in the bottom of the seventh inning to close the gap to 13-10 and then loaded the bases. The Call-Tag players did not choke or in the least bit fret as they held Hankins with the bases loaded and walked away with the victory.

In the championship game, against Dunkin Donuts, they trailed 2-0 after the first inning, but bounced back to garner the first place trophy.

In the horse racing industry, they term two horses with the same owner a stable entry. In a way, Call-Tag's is one half of the Jimmy Taggart stable entry as Taggart also sponsors Tag's in the Monticello league. Tag's also enjoyed a great season, making it to the semi-finals of the Monticello League play-offs before bowing out to Dunkin Donuts. Ironically it was Dunkin Donuts who Call-Tag's defeated in the championship game of the tournament on Sunday.

Four players, including the three Taggart brothers, play for both Tag's and Call-Tag's. Gary Green, the player-manager of Tag's, also does double duty for Call-Tag's and Tag's. The three Taggarts were named to the Monticello and Liberty All-Star team for their play this season.

Even with the tournament victory, the Call-Tag's day was not complete. After the championship game ended at 6:20 p.m., the players headed straight for the Liberty elementary school field where they were scheduled to play Bradley Tavern at 6:30 in the first game of their playoffs.

They won that game, too, to conclude a day in which they came out on top five times, pocketed $300, and more importantly earned the right to boast they are the county's number one team.