LAKE HUNTINGTON – Dedication to academics and athletics at the high school level are key if you want to continue on with sports after graduation. For Sullivan West’s Gabby Cohen, that … 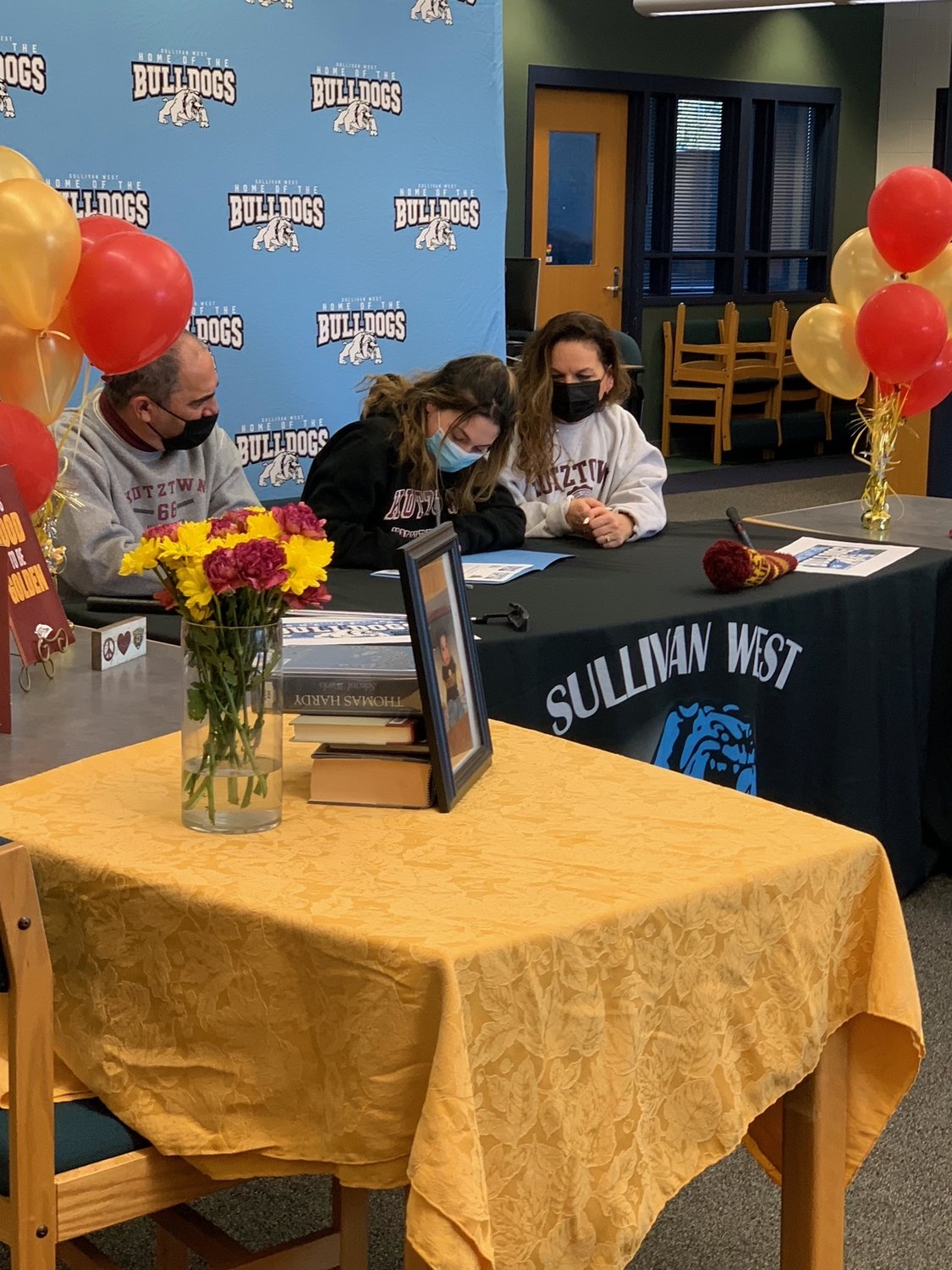 Gabby (middle) is joined by Ken (left) and Tanya Cohen(right) as she signs her letter of intent to play golf for Kutztown University. Sullivan West held an event for Gabby’s signing, in which Kutztown’s golf coach was able to join remotely.
Contributed Photo
Posted Thursday, December 23, 2021 6:20 am
Anthony Morgano

LAKE HUNTINGTON – Dedication to academics and athletics at the high school level are key if you want to continue on with sports after graduation. For Sullivan West’s Gabby Cohen, that achievement was realized on Monday afternoon, when family, friends, and coaches gathered in the library to show their support as Gabby signed a letter of intent to play for Kutztown University.

The Golden Bears’ coach, Robert Fisher joined via zoom to express how excited he and the team were to have Cohen join their ranks.

“She is the kind of athlete that we’d like to have,” Fisher explained.

Fisher, who was named both PSAC and KU Coach of the Year in 2018, explained that student-athletes that play multiple sports learn more about team dynamics.

“After Gabby met the team, they made sure I knew how much they wanted her on the team, telling me to ‘please make sure she joins the program.’”

For Sullivan West, Cohen’s collegiate signing is the school’s first in three years, and the school hosted the event in December rather than on National Signing Day, Februrary 2, because they wanted to make sure Gabby was given the honor that she earned.

Pat Donovan has coached Gabby since the seventh grade, and had nothing but pride and congratulations for one of his team captains.

“She has always been a successful student and team leader. Gabby would always be out on the course, even in the offseason. She’s always been a golf course rat. We’re going to be losing a leader, but congratulations to Gabby.”

Of all the colleges that Gabby toured, Kutztown University was the best fit. According to her father Ken Cohen, “Gabby looked at almost 20 schools and Kutztown was the only one that clearly checked off all the boxes for her. The right size at 9,000 students, strong academics, affordability, the opportunity to play Division 2 golf as a freshman, a great coach and just far enough away from home!”

Ken also said, “She is very excited about the opportunity to experience all this in a true college town.”

Gabby, after signing the letter of intent said, “To be able to play golf at the college level is something I have always wanted to do.”

After meeting her new teammates at Kutztown she said, “When I first met them, they reminded me so much of the team that I grew up with at Sullivan West.”

Gabby made it a point to thank former and current teammates at Sullivan West, including Montana Schmidt and Taylor Allen saying, “they were amazing girls to play with, and never failed to make me smile when I hit a bad shot. I don’t know where I’d be without those two and their support throughout my high school career.”

Cohen also mentioned Abby Parucki, who is the newest member to the team but has helped to motivate Gabby, as well as Coach Donovan, “for five years he put up with me.”

Gabby concluded by saying, “Without all the support and encouragement, I would not be where I am today, signing to play as a Golden Bear for the next four years. I’m thankful for everything and everyone who has supported me throughout the years.”