MONTICELLO – “Once in a blue moon, there comes somebody like you.”

Most Outstanding Athletes of Spring 2022 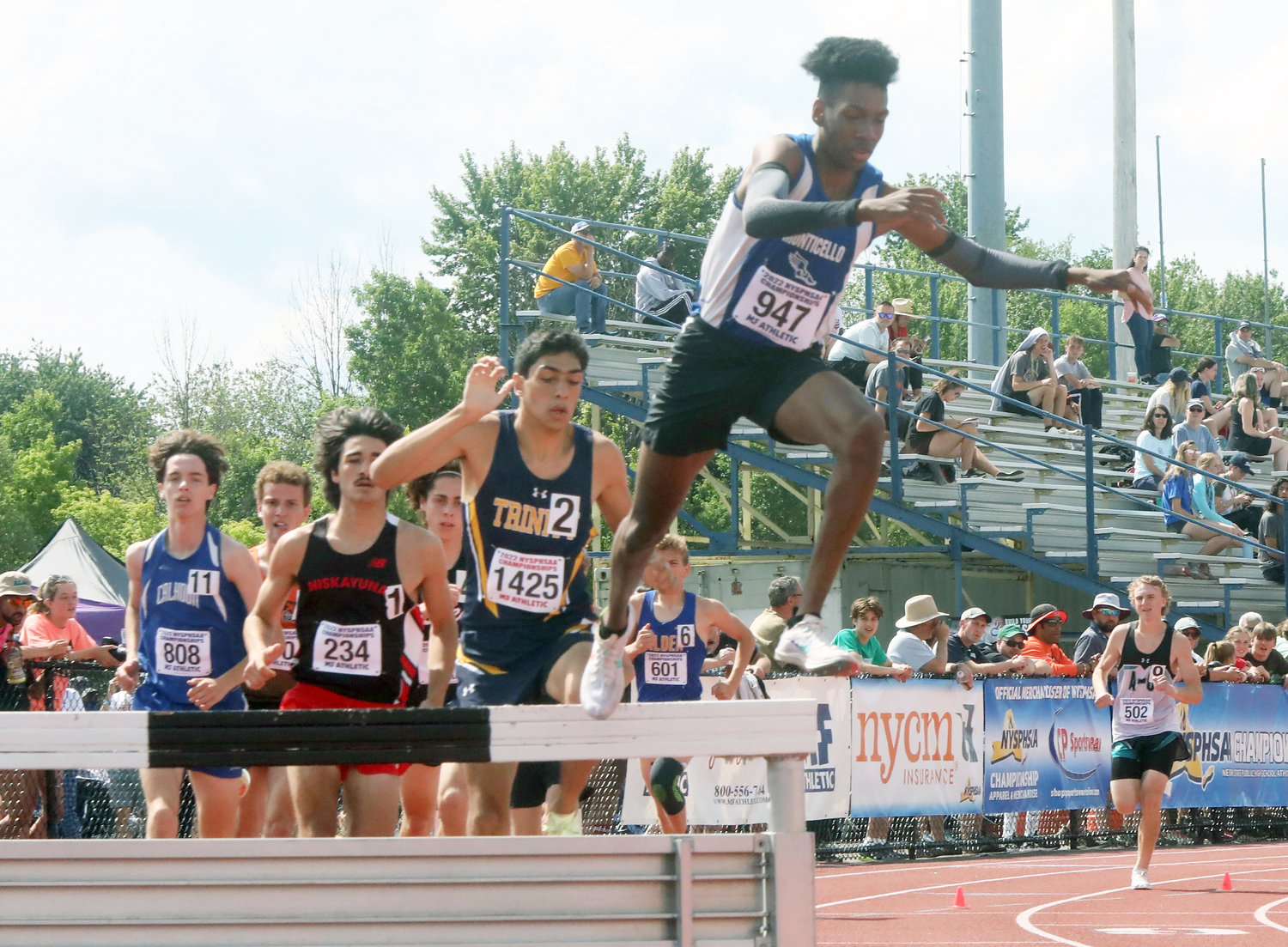 Monticello senior Evan Waterton captures the early lead in the 3000 Steeplechase in the Federation Championship. He finished fourth overall and second among Division I competitors thereby garnering two medals, which were added to his two won the day before in the 3200. Waterton finished fourth at Nationals in the 2k Steeplechase earning a top five spot in the nation in the event.
Richard A. Ross | Democrat 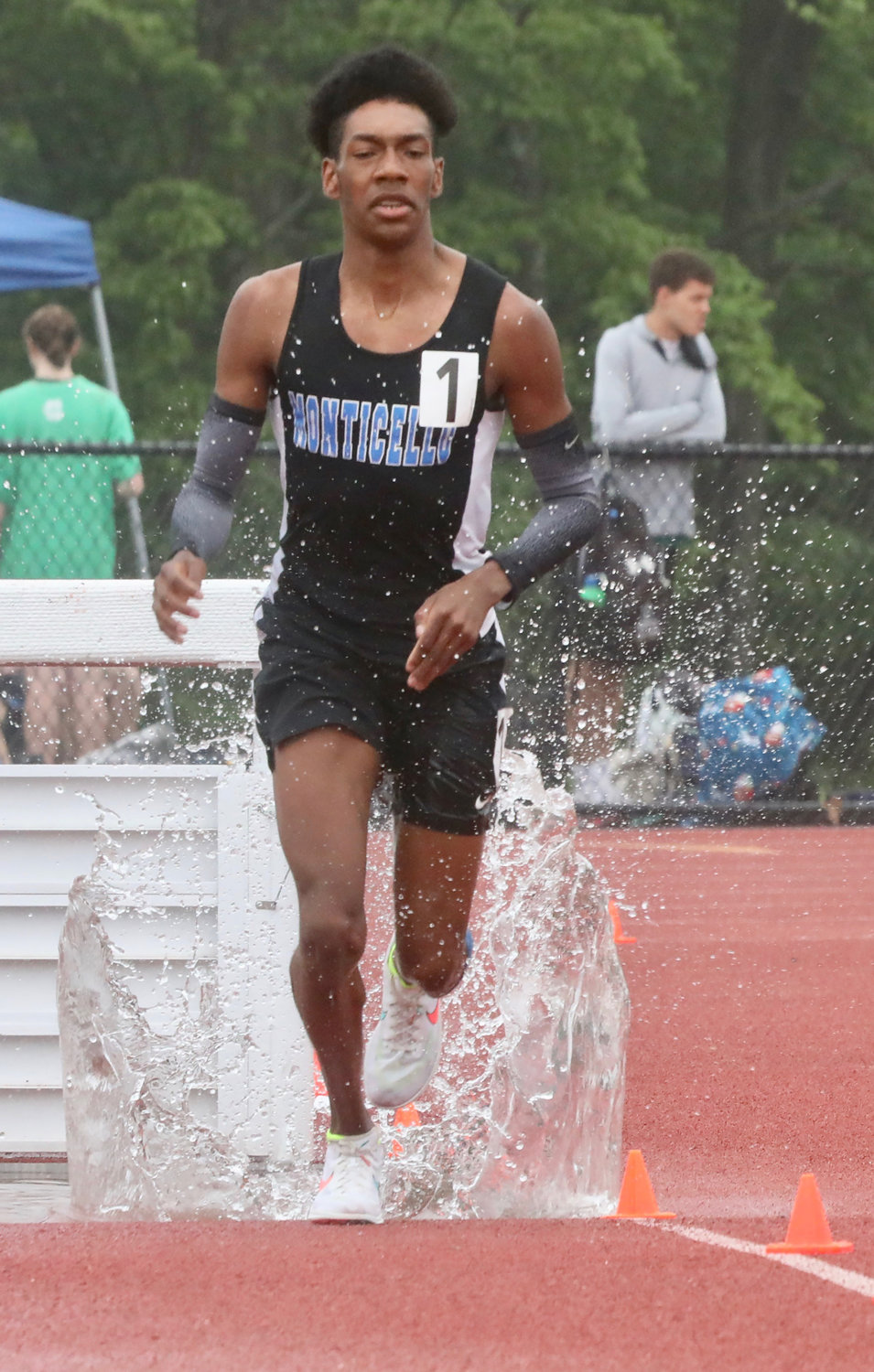 Evan Waterton took first in the 3000 Steeplechase at the OCIAA Championship in May. He also won the 1600 and the 3200 to help Monticello garner third place, its all time best finish at the event.
Richard A. Ross | Democrat
Previous Next
Posted Tuesday, June 28, 2022 6:20 am
Richard A. Ross

MONTICELLO – “Once in a blue moon, there comes somebody like you.”

So intone the lyrics of the Edie Brickell ballad that could aptly reference the inimitable uniqueness of Monticello’s phenomenal senior distance runner Evan Waterton. In a track program historically most known for its prowess in sprinters and jumpers, Waterton’s immeasurable impact in distance races not only was instrumental in propelling the Panthers to their tenth Section IX Division III title in the past 12 years and an all-time best third place finish in the OCIAA championships, but his performances this spring cemented his place in NYS and National running history with his blistering times in races against the toughest competitors.

Rare indeed it is to find a runner who is so gifted in a range of distances from the 400, all the way up to the 3200 including a special proficiency in the steeplechase that requires not only speed but the leaping ability to clear the barriers and the water pit.

Waterton began capping off his illustrious high school running career with four medals at the NYSPHSAA and Federation Championships with two each in the 3200 and the 3000 steeplechase. Those medals came from placing fourth overall in the 3200 with a personal best time of 9:12.42. That time, which put him sixth overall, netted him fourth place among the Division I runners, thereby garnering two medals. Two more medals came in the 3000 steeplechase with another PR time of 9:13.79. He placed fourth overall and second among Division I competitors.

In the 1600 at states, Waterton just missed a Division 1 medal with a ninth-place finish in 4:17.18. He came in 12th overall. His personal best time in mile came this spring at the Loucks Games with a time of 4:15.43. Waterton went on to the New Balance Outdoor Nationals staged at Franklin Field in Philadelphia and took fourth in the 2000 Steeplechase with a time of 5:56.14. That fourth place national ranking puts him in the realm of the truly elite.

Waterton is heading into the United States Air Force and hopes within a year to be admitted to the Air Force Academy in Colorado Springs. In the interim he will run some races unattached.

His running history hearkens back to age five or six as he recalls being signed up with his older brother Willie for a 5K race. He finished 3rd in his age group. The races continued as he got older including the Allyson Whitney 5K and the grueling Monticello Monster Run Classic. In that race he was supposed to run the 5K but missed a turn and went the 10K distance. He became the first youngster to complete the 10K. He was eight years old at the time. Thus began his love for distance running.

In sixth grade he tested up for Cross-Country and ran X-C from 7th through 12th grade. In ninth grade he started Nordic cross-country skiing in the winter, which added stamina, core strength and mindset to his distance running exploits. His outdoor tour de force took off in 9th grade when Steve Bello transferred into Monticello. Waterton, Brandon Mancrone and Quintin Cruz became a relay force to be reckoned with. He also ran the 1600 and the steeplechase.

COVID-19 interfered with his school racing, but he continued to train on his own during that hiatus. “Running is a mental sport. I’m very self-motivated.”

Waterton has watched numerous videos and is constantly learning. He considers the mile to be his favorite race and describes the Steeplechase as “fun.” At states, going into the second lap he got spiked as the runners were bunched too close together. He feels as if he could have run much better.

“I like the steeplechase environment. The competitors are there for one another. It’s more tactical. You have to control your breathing so as to not push too hard.”

In all of the distance races, pacing is critical. Waterton has had a huge impact on the Monticello running programs. “I like to help kids with their form and breathing.”

Needless to say he will be greatly missed not only in the dual meets, but in the larger invitationals where he would regularly accrue 40 points winning all four of his events. In congratulating Evan Waterton for his numerous fine running milestones, Brickell’s words ring out again, “Once in a blue moon there comes somebody like you.”