Westies fight mightily but fall to Burke in league clash, 2-1

Westies fight mightily but fall to Burke in league clash, 2-1 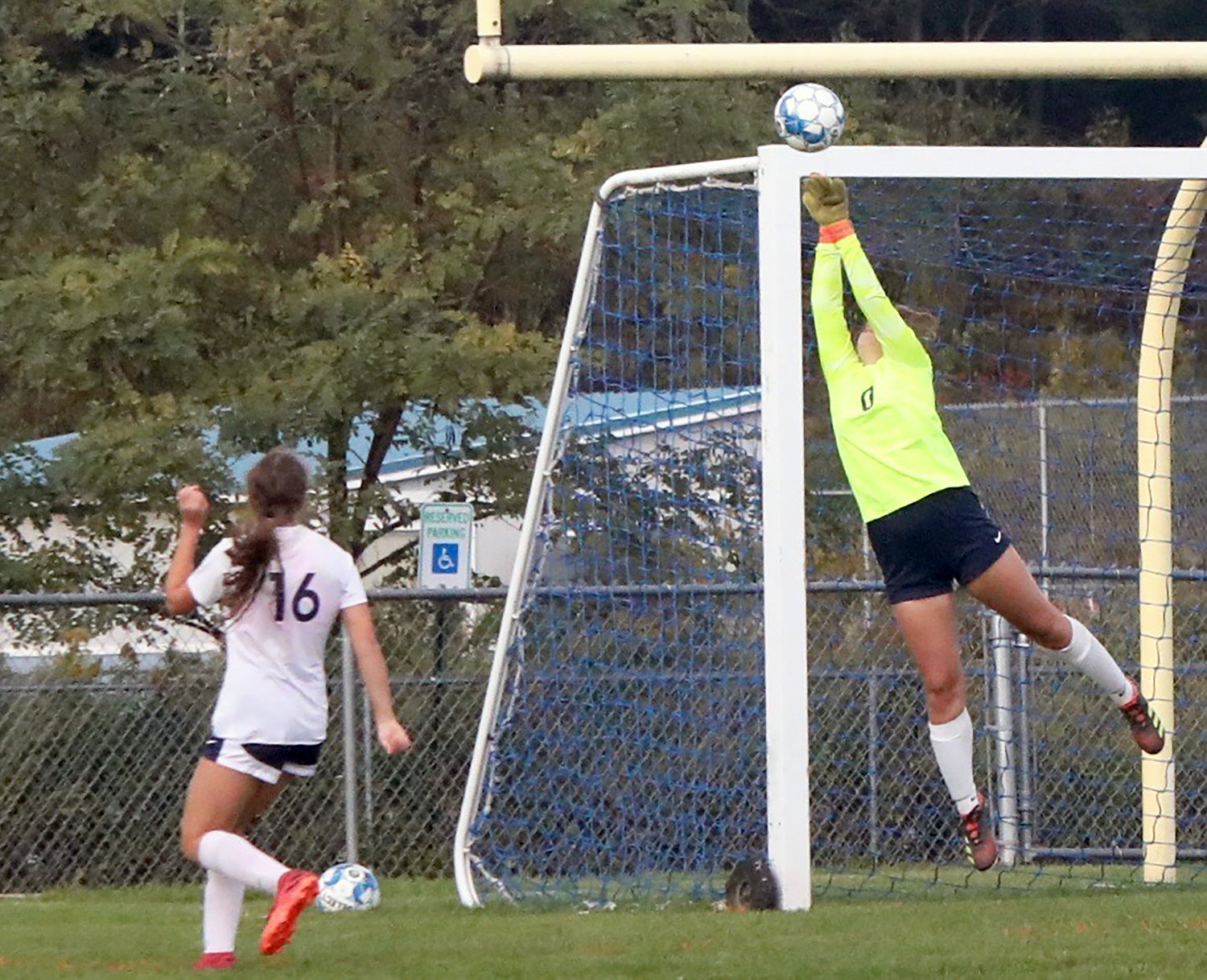 Sullivan West senior keeper Elanie Herbert leaps to punch a ball out of net. She recorded 15 saves in the 2-1 league loss and looked extremely impressive.
Richard A. Ross | Democrat 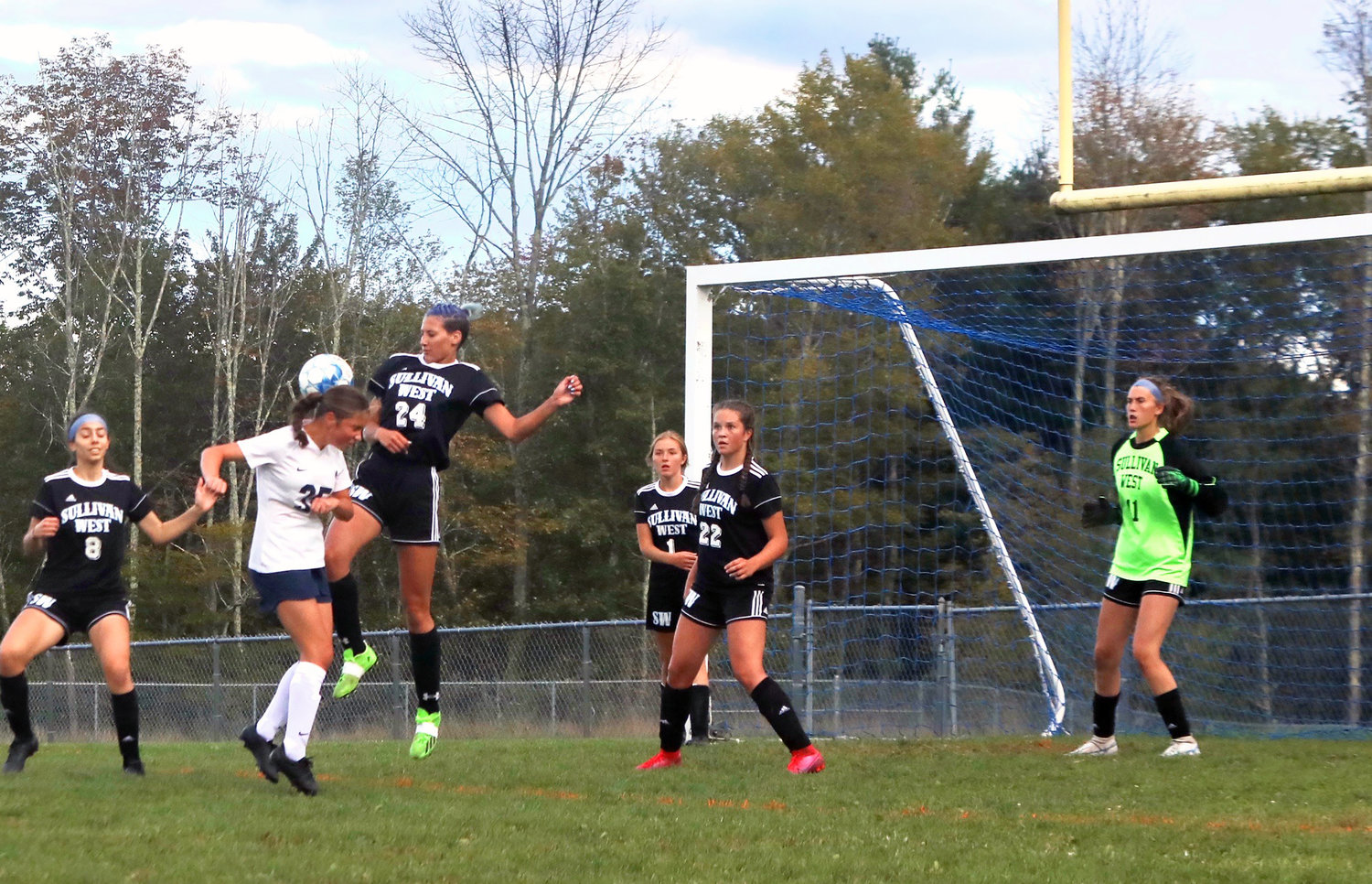 SW senior Anna Bernas proved her value in the game both offensively and defensively. She had the team’s lone goal in the second period. Here she rises to deflect a Burke shot on goal.
Richard A. Ross | Democrat 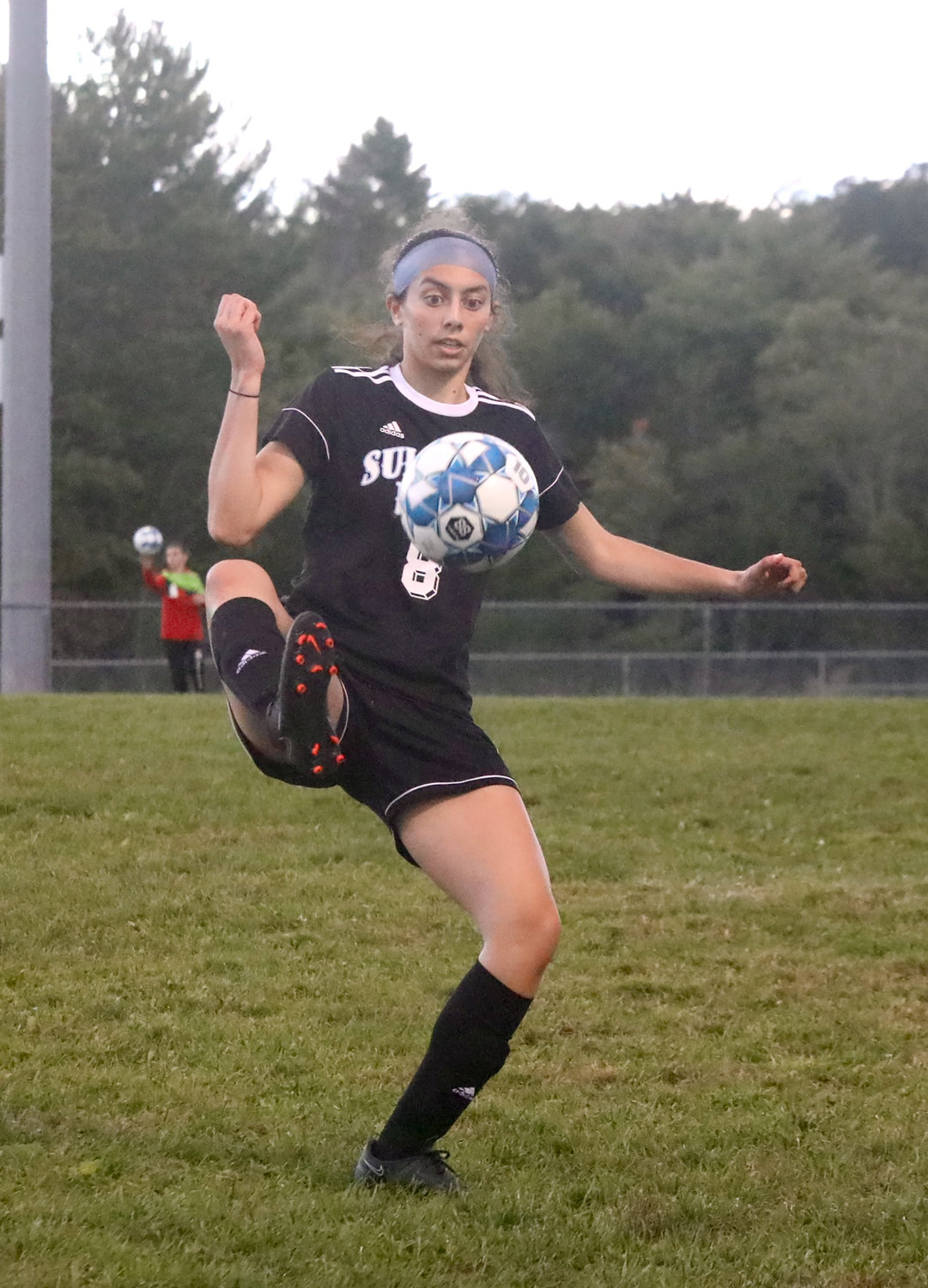 LAKE HUNTINGTON –– It’s combat week in girls Class C soccer among the four OCIAA teams battling for division prominence. For the Sullivan West Lady Bulldogs coming off an impressive and rare win over Seward down in the cornfield to the tune of 5-1, meeting up with John S. Burke, which dropped down to Class C this year, figured to be a key test.

Burke, as well as Tri-Valley, had already handily beaten Seward too, as the Lady Spartans seem to have entered a down cycle after losing much talent to graduation. In this first meeting between the new division rivals with Chester moved up to Class B, Burke marshalled two first period goals beginning with a solo shot by Kate Cuebas with only 3:25 gone by. A rebound out of the goal late in the period resulted in a quick pass from Kiera Laurice to Kathleen Conlon for the second score.

Sullivan West played with great intensity and narrowly outshot Burke 22 to 21 in the game, but in that first period just couldn’t get anything by Lady Eagles keeper Madeline Coley. But the game dynamic changed radically in the second half as the relentless Lady Bulldogs took charge. They owned the time of possession and cut the lead in half as Anna Bernas took an assist from Liz Reeves with only 8:37 gone by in the stanza.

The Lady Westies literally had Burke on their heels the rest of the way as they mounted wave after wave of attack and held Burke scoreless. It was a battle reminiscent of a Sectional game and may well prove to be a preamble to a postseason win or go home encounter.

When the final whistle blew it was Burke with the 2-1 win but both teams knew they had been in an epic battle.

Sullivan West Coach Megan Brockner noted, “That was the most impressive game I’ve seen our team play. I’m excited to go to Tri-Valley.”

Brockner was referring to the third league clash of the week, this one against the Lady Bears who traveled to Burke on Thursday. Pending the outcome of T-V vs. Burke and SW vs. T-V, the first half of the league season will be in the books, and it remains to be seen who will be on top at that point.

One thing is clear: all three teams are likely playoff contenders looking for that golden portal into the Sectional final where no doubt, mighty Millbrook will be waiting to defend its title.

Burke coach Sara Rickard Fandl said, “We’re starting to finally come collectively as a team. But we’re not starting out by not coming out strong enough. It affected us because we are letting the other teams set the tempo. This is the best Sullivan West team in a long time. They are very composed under pressure whereas we lost our momentum. That hurt us. Urgency is a word we have to learn.”

Sullivan West fired 22 shots with 12 of them on goal. Burke had 21 shots but managed to have 17 of them on goal. SW’s Elanie Herbert registered 15 saves including some impressive dives and gathering ins. Burke keeper Madeline Coley saved 11. Burke improved to 3-2 with prior wins over Seward and Fallsburg against losses to O’Neill and Cornwall. They are now 2-0 in league play. Sullivan West fell to 4-2-1 with a 1-1 league record.