Running into the annals of history

BEAR MOUNTAIN –– Sometimes we can’t see the forest for the trees. With so much attention being paid to the football playoffs and soccer sectionals, many people miss out on the …

Running into the annals of history 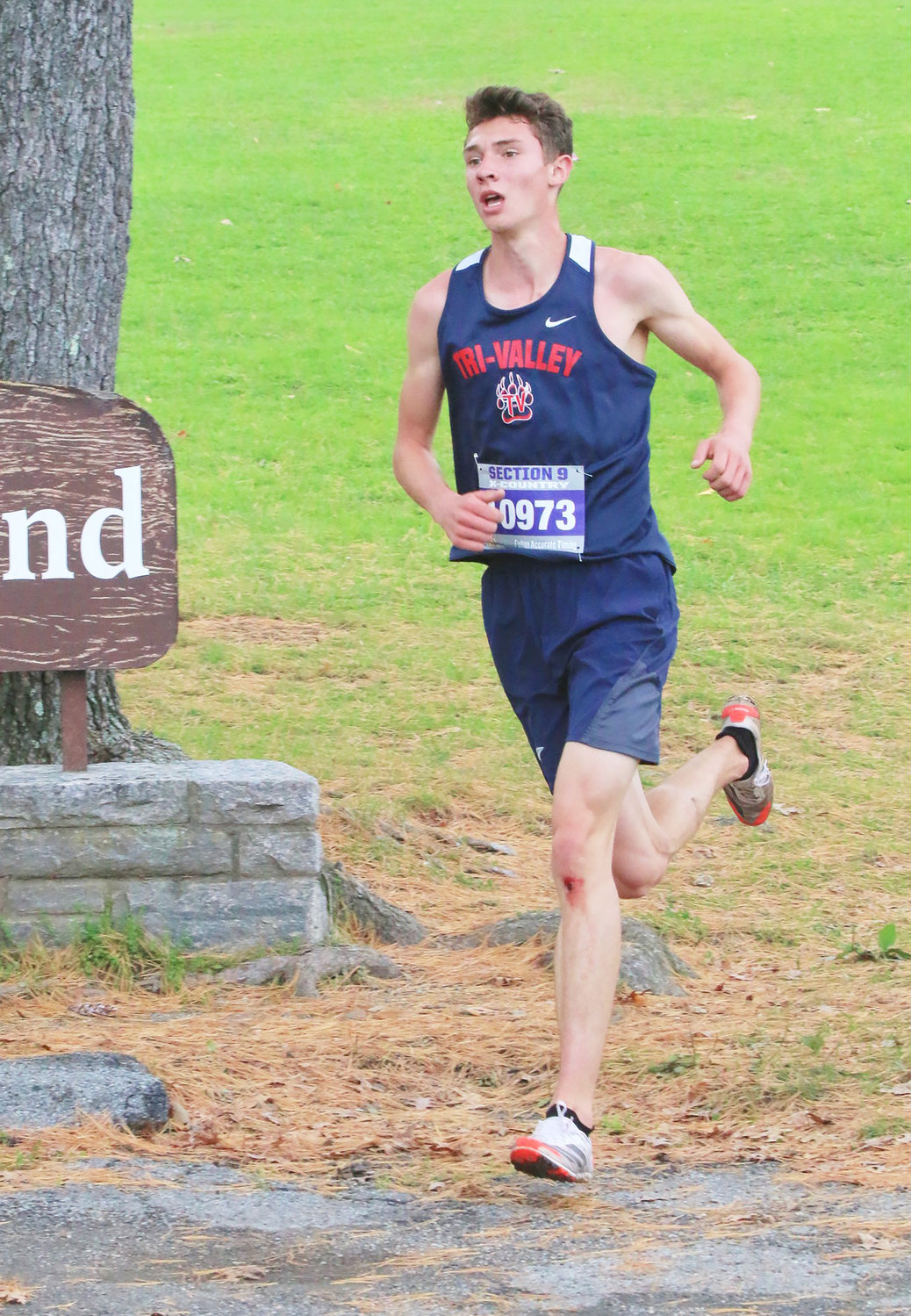 Adam Furman comes down off the hill and approaches the final segment of the race. He finished more than a minute ahead of the second-place runner.
Richard A. Ross | Democrat 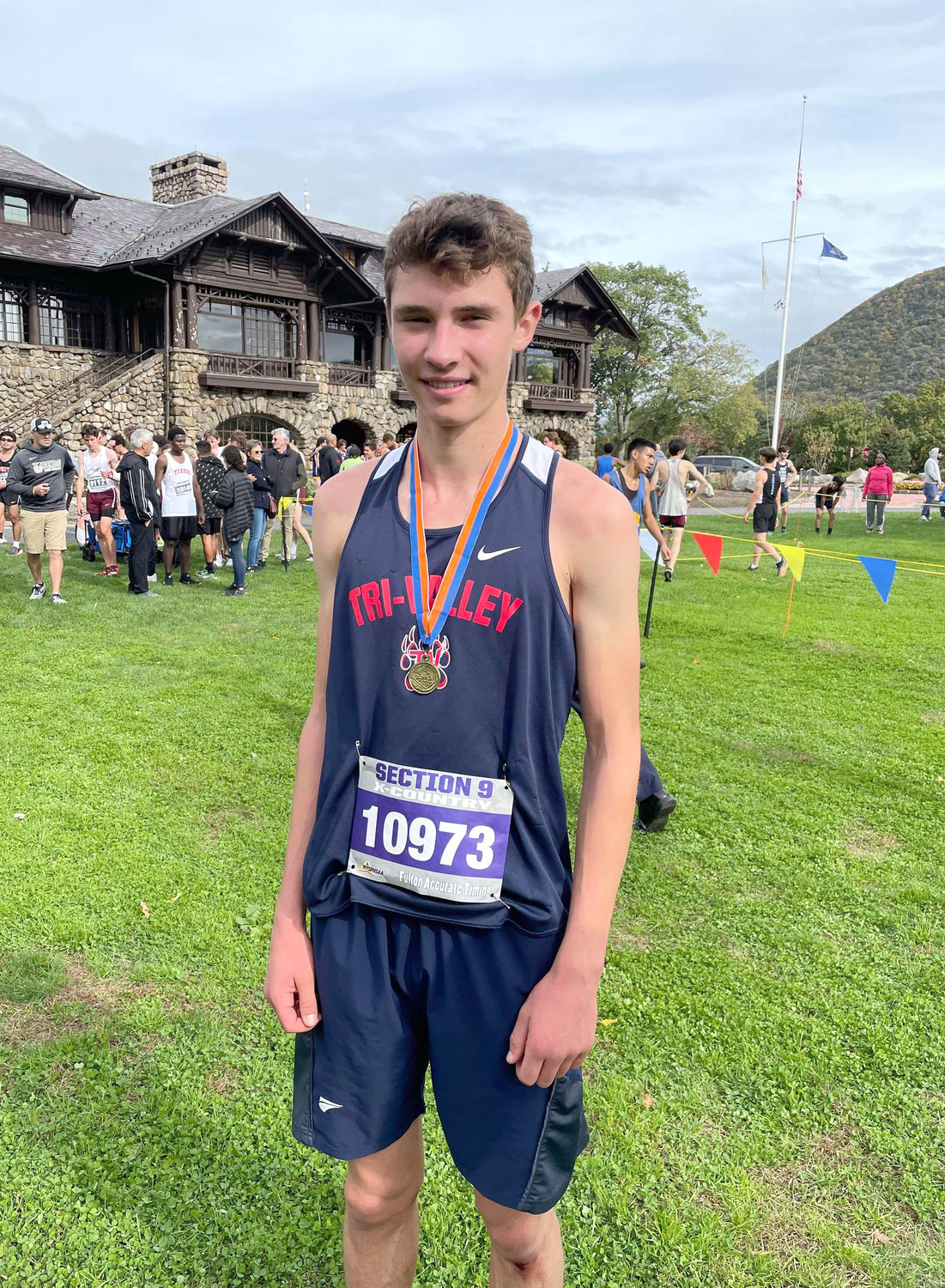 Tri-Valley junior Adam Furman won the OCIAA Cross-Country Championship race. He became the first county boy to win the coveted title in the 54 years of the event. T-V has been competing in the race since 2000 when they joined the Orange County League. Furman has had a meteoric rise to prominence this fall with wins in big races against very tough competition.
Richard A. Ross | Democrat
Previous Next
Posted Friday, October 29, 2021 7:32 am
Results

By Richard A. Ross

BEAR MOUNTAIN –– Sometimes we can’t see the forest for the trees.

With so much attention being paid to the football playoffs and soccer sectionals, many people miss out on the accomplishments of stalwart, heroic cross-country runners.

Tri-Valley junior Adam Furman just won the OCIAA Championship race, becoming the first county male harrier to win the gold in the 54-year history of the race that includes 24 Orange County League Schools, big and small. To be clear, Tri-Valley did not join the Orange County League, nor did any of the Sullivan County Schools, until 2000.

Even still, it has been 21 years since then without a county boy champ. Furman probably didn’t know that prior to the race. He just knew it was time for him to win. Poised at the start line alongside of a field of 131 runners, that had within its ranks the elite runners from the OCL, not to mention many from Section 9, (MHAL runners were not there), Furman had a plan, and that plan was to run all out and win. And he did just that, crossing the finish line with a time of 15:42.1. It wasn’t a day for record times, with at least part of the course heading into a strong headwind and having to navigate a hill to which wood chips were added after the torrential downpour.

Furman’s accomplishment is by far the biggest Sullivan County story to date this fall. But with the state meet looming on November 14 in Chenango Valley State Park, even this zenith could yet be surpassed.
To those close to the runners’ world, Furman’s performance was the latest of triumphs he has accrued this fall. Early in the season at the Pre-States meet in Chenango Valley Park, Adam took first and beat Beaver River’s Colton Kempney, who finished second in states in 2018 and 2019. He bested him by more than ten seconds, an impressive feat. Then at the Bowdoin Park Classic, he missed his dad Chip’s PR of 16:28 by just two seconds. He finished fifth. Then on October 2 came the McQuaid invitational in Rochester, a huge race for small schools. Adam took first there in 15:27.60. The following week he won the Manhattan College Invitational 2.5-mile race in 12:47.20. A week later in Saratoga Springs at the Burnt Hill Invitational he took first again, this time in 15:33.90. Then came this win in the OCIAA. Section 9 Class D figures to be not much of a challenge, and Furman’s winning streak looks to continue.

“We’re paring down on our heavy training now, getting ready for the state meet,” said the mild-mannered winner.

To give a bit more perspective on the competition, it should be noted that Furman and his Tri-Valley teammates were going up against much larger schools with winning pedigrees in the entire history of the OCIAA and the last 21 years in particular when T-V and other former members of the Western Sullivan League became involved. Winners included the likes of Washingtonville, Warwick, Cornwall, Monroe-Woodbury, Goshen and Middletown and others. Tri-Valley became the 13th school to post an individual winner.

T-V’s Heather Iatauro won the race twice so Furman’s win is the third overall for the school.

A much-anticipated match-up between Furman and Monticello’s Evan Waterton didn’t materialize as the latter has had some nagging ankle issues. Waterton, who beat Furman by one second earlier this season in Monticello and again at Tri-Valley, finished eighth in 16:46.5. Tri-Valley was missing Van Furman who was at the National FFA Convention playing his drums. With the full team compliment in tow, Tri-Valley has an excellent chance for a state title. Coach Furman noted that had Van been there for this race, the Bears might have finished as high as second. They’ve never been in the top three since they joined the league in 2000.